A New Tour to Breweries Places Comedians on the Trolley

Lauren Serpa The Hop On, Stand Up Tour from RVA on Wheels places local comedians at the head of a festive trolley taking you around the city to drink beer, then work it off by laughing. Jonathan Nelson is the host and co-founder.

We settle into the vintage 1920s-inspired trolley, conversing among ourselves beneath thick white Christmas lights strung above our heads. A little buzzed from the first brewery stop and anticipating the next one, we watch the city pass by in the serene twilight blur.

"I invented the word fedorphins," says comedian Josh Blubaugh, known for his work at Coalition Theater. "They're chemicals released in your brain that make you think you're cool while wearing a fedora."

The Hop On, Stand-Up tour is billed as Richmond's "number one comedy-brewery-trolley tour," a new monthly event promising to provide a perfect Venn diagram of craft brews and stand-up comedy. So far, it hasn't disappointed. "It's half a living room comedy show, half 'Speed' with Keanu Reeves," co-founder Jonathan Nelson says.

After our meeting point at Champion Brewery, we journey to the next destination regaled by our comedian's witty anecdotes and insights. The drive between breweries has been mapped out to provide scenic views of the city, says the other co-founder, Grace Manno.

The tour begins at a local brewery, a central hub where participants can meet and mingle over their first complimentary beer or flight. From there, a signature RVA on Wheels transports guests to two additional breweries, with a free drink-of-choice available at each spot.

Since starting in February, the event quickly sold out. It's presented by RVA on Wheels, the Shockoe Slip organization responsible for historic trolley tours, electric bike rentals and those groups of tourists you see riding downtown on Segways.

The second brewery comes before we know it. One beer and a lot of chitchat later, back onto the trolley we go for that sensational "trolley, comedy, beer, repeat" cycle. The third stop goes by far too quickly. The drinks flow and small talk turns into comfortable chatter, then uproarious banter. Sudden close friendships occur between strangers.

Comics frequently relish in the stage of the trolley, finding inspiration in the moving surroundings or riffing on the driver. Or trying desperately to remember the handrails while standing. Through the benefit of beer, the performers often find easier laughs as the night continues. "Drinking always helps a little more laughter come out," Manno explains. "So we hear a bit more reaction from the audience at the end of the night." 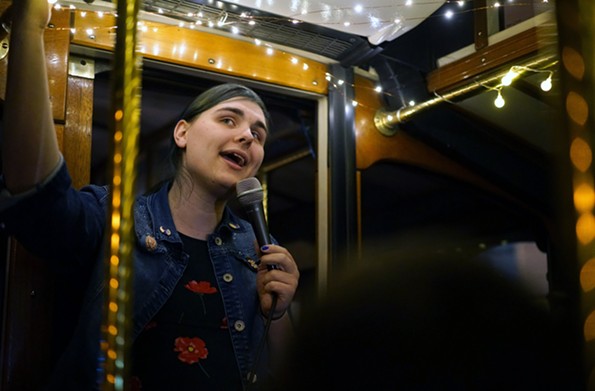 On the inaugural tour, with a trolley full of couples celebrating a late Valentine's Day, comedian Jim Zarling worked the crowd, asking guests about their relationships. Towards the end of the night, when he questioned the quiet couple at the corner of the trolley about the secret to a lasting marriage, the otherwise silent husband responded without hesitation, "Great sex." Beer also enhances honesty.

Two RVA on Wheels employees, Manno and Nelson, are both active in the local comedy scene and came up with the idea to combine their working and leisure worlds.

"We loved the idea," says RVA on Wheels operations manager Hendley Ward. "Our business is all about providing fun and unique ways to explore Richmond, and with the craft beer scene exploding, we were all about creating some new brewery tour experiences."

They pull the onboard talent from established stand-up comedians in the area but eventually hope to bring in out-of-town talent as well. Breweries also vary with each tour, but Manno and Nelson make sure to patronize locally owned spots.

"It's about discovering Richmond, whether you're local or not," Manno says. "Comedy lovers get to go to a new brewery, or beer lovers get to hear a new comedian."

The event is ideal for date nights, out-of-towners or residents looking for something different to do on a Friday night.

Finally, the trolley takes us back to our original destination. Bellies full of brews and laughter, we depart from the Hop On, Stand-up tour, exchanging numbers and promising to return again like children reluctantly leaving summer camp.

Now when are we getting the Hop On, Stand-up tour for Segways? S