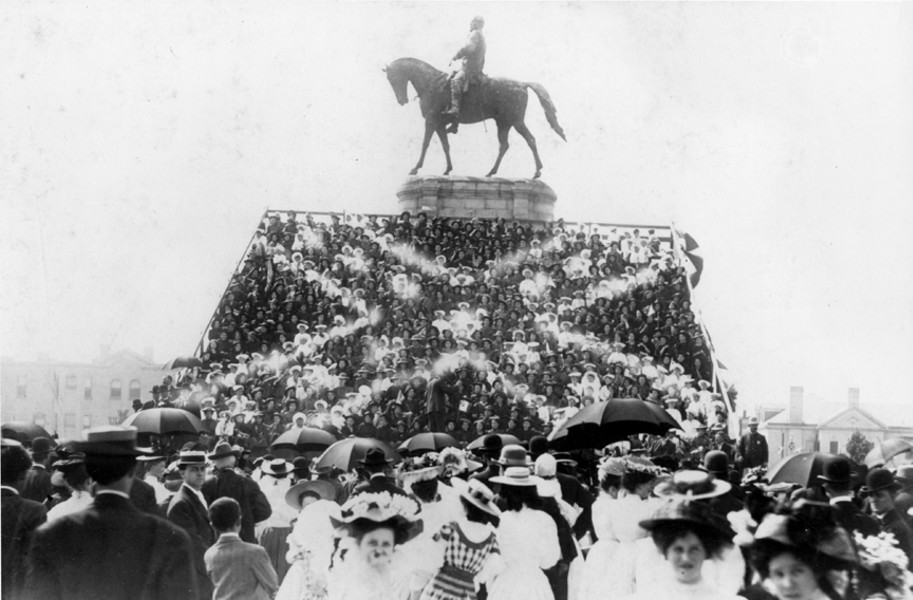 Cook Collection, The Valentine May 30, 1907: A crowd of Richmonders takes the shape of a Confederate flag in front of the Lee Monument during the unveiling of the Jeb Stuart Monument in an image provided by the Valentine.

The Valentine's goal with its new exhibit is a simple one: to get residents thinking and talking about all of the city's monuments.

"Monumental: Richmond's Monuments (1607-2018)," like all exhibitions at the Valentine museum, aims to place Richmond's history in context. The exhibition examines how, when and who were the creators behind those monuments, from 1607 when the first English colonists planted a monumental wooden cross on the banks of the James River to the planned Emancipation Day monument approved for Brown's Island in 2019.

"It's a large, unwieldy topic," explains David Voelkel, the Elise H. Wright curator of the Valentine's general collection. "The challenge was how to get 10 pounds of history in a one-pound bag."

Although a handful of late 19th and early 20th-century monuments have been driving the contentious debate over Civil War monuments, Richmond is a city with many other earlier and later monuments.

"What is viewed as an agreed upon truth in one generation may be seen as something very different later," Voelkel says. "As a community, we should question what is on the landscape because many people aren't aware of the back stories behind the monuments they drive, bike or walk past every day."

Multimedia artist Dana Ollestad was commissioned by the Valentine to record Richmond's monument inventory through film and through a set of 12 large-scale photo enlargements of details of various monuments. The photographs could almost be considered a pop quiz — how many local monuments can you recognize from one detail? Ollestad's five-minute video tour uses drone footage that allows a bird's eye view of monuments normally seen from street level.

The sculptures along Monument Avenue were originally intended to be viewed in the European tradition, from an open carriage.

"What were conceived of as public art are now driving obstacles, but we can change that," Voelkel says. "We chose to put them there 100 years ago, so we can choose what to do with them in 2018."

A three-screen triptych showcases more contemporary footage of the monuments through all four seasons. If you never gotten down to Brown's Island to see Paul DiPasquale's "Headmen" sculpture in a snowstorm, here's your chance to see the 19th century James River boatman wearing winter's snow. Two benches allow visitors to sit and reflect on Richmond's monuments in a quiet, thoughtful manner.

One highlight of the exhibition is a drawing of Salvador Dali's proposed monument to commemorate Civil War humanitarian, nurse, philanthropist and the first woman to have been formally inducted into an army in American history, Sally Tompkins. Dali conceived of the sculpture as showing Tompkins slaying the dragon of disease perched atop a petri dish balanced on a finger. Unsurprisingly for conservative Richmond in 1966, the proposal of such a monument — and it was pink, at that — sparked outrage and was never started.

"What would the Monument Avenue discussion be today if that Dali statue had been built and was part of the conversation?" wonders the Valentine's director, Bill Martin. He says the real question is what the next monument should be. "The Valentine is trying to explore the nexus of what the past was and what Richmond could look like in the future."

Also part of the exhibit are objects such as artists' maquettes — sculptors' small, preliminary models of proposed pieces — along with silver monument commemorative spoons, a stereoscope of Virginia's Washington monument and oil portraits.

Voelkel notes that over the past few years, there's been more discussion in our community, as well as the larger world, on the subject of monuments and their place in public spaces.

"In order to be able to participate in these discussions, we all need to learn more about each monument and then share this knowledge in a meaningful dialogue with one another," he says. "That's what a true community is all about." S