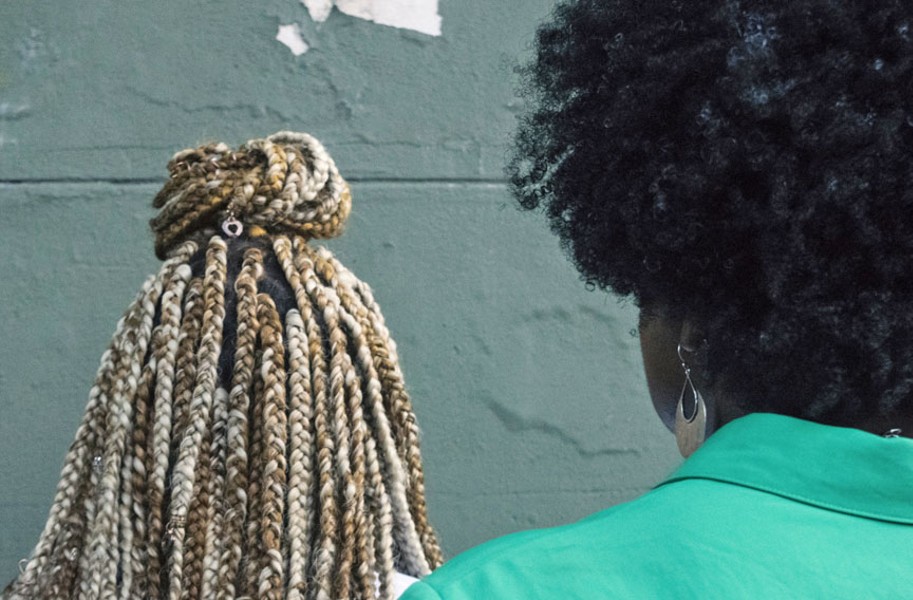 Cara Roots This photo is from the third filming day of “#dontrouchmyhairRVA,” a documentary exploring the cultural values of African-American hairstyles. The title is inspired by Solange Knowles’ hit song.

A hairstyle can be a crown — an outward expression of inward individuality. For black people, the journey to acceptance and celebration of their tresses is one fraught with emotion and fueled by a complex history. A new film project focuses on black Richmonders’ relationship with hair, and its deeper meaning inside and outside the African-American community.

“[The documentary] “#donttouchmyhairRVA” is a celebration of black experiences, emphasis on the plural S,” says Chaz Barracks, art director, producer and team leader of the project. He and the team are huddled inside the Depot at Virginia Commonwealth University.

“We want to show that there is no one black experience. Black people come from different socio-economic backgrounds. We are LGBTQ, we come from single-parent homes and two-parent homes, we have varying perspectives on politics, et cetera — but hair is often an expression of freedom and agency in our culture.”

The R&B songstress Solange’s 2016 hit, “Don’t Touch My Hair,” serves as a point of inspiration for the project, says Christina Hairston, the team’s logistics and communications lead as well as a visual artist and recent VCU graduate.

“That song alludes to hair as more than just adornment among people of color, especially women,” she says. “When she sings, ‘Don’t touch my hair, when it’s the feelings I wear,’ I can relate to that, people in my community relate to that.”

The six-person leadership team considers “#donttouchmyhairRVA” a community-based creative project, pulling from the experiences of local hair stylists, business owners and creative people who share their perspective on black hair’s meaning beyond aesthetics. Brewer’s Café owner Ajay Brewer says his decision to participate in the project was a “no-brainer.”

“Hair is just a part of the way one looks, but there is so much feeling and meaning assigned to it,” he says. “There’s a lot of stuff that is OK for other cultures and other people to do, but black people can’t do, and wearing our hair in its natural state is an example of that. The offensive nature that comes of having an Afro — other people looking at you strangely, or like an exotic creature — that needs to stop. And we’ve got our own role models, black folks, telling us to conform, to change how our hair looks, in order to fit in and be successful. Completely problematic,” he says, referring to former NFL quarterback Michael Vick’s comments to free agent Colin Kaepernick advising him to cut his hair in order to be hired by another pro team. Vick later apologized.

This highlights another important aspect of “#donttouchmyhairRVA”: it’s not just about educating nonblack people on black hair. One of its primary functions is to serve as a mirror for different members of Richmond’s diverse black communities, to show the common threads and disparate perspectives on what black hair represents.

Barracks, who is a media, art and text doctoral student at VCU, says it’s also an academic research project, which will conclude with a film to be released this fall.

“We’re just going about our research methods in a different way,” he says. Each person on the “#donttouchmyhairRVA” team is an artist. Videographer Nick Vega, choreographer Christine Wyatt, photographer Sha Rich, Hairston and Barracks all will apply their creative talents to display the bonds that black hair forms among different kinds of black people, and reflect those similarities and differences on screen.

In visiting Richmond barber shops, they’ve explored the connection between sexuality and black hair; Barracks notes that the shops are typically a very masculine space, and while commonly considered a haven for black men within the community, they’re not always a welcoming atmosphere for nonheterosexual black males, which he says he witnesses personally as an openly gay black man.

“We’re looking at how terminology impacts our reflections of ourselves and our interpretations of each other,” says faculty mentor, Pamela Lawton, an associate professor of art education at VCU. “When I was growing up, a ‘natural’ was an Afro hairstyle. So, you don’t hear people saying that anymore, but that’s what it meant to me. Terms evolve, and we’re studying that evolution.”

While emphasizing that natural hair certainly has different meanings to black people than it does to other communities, Hairston says, “One thing I’ve learned through this process is that ‘natural’ is whatever it is to you. What we shouldn’t be doing is using the term to forge separation between ourselves.”

The team held its final casting call Aug. 4, and the project has entered into production. With a tentative film release date sometime this fall, the group plans to hold screenings at Afrikana Independent Film Festival’s second annual multiday festival, Sept. 14-17 (Disclosure: The writer is on the board) and at other locations in the city. For information, email christianhairston@gmail.com or search the hashtag #donttouchmyhairrva on Facebook and Instagram. S