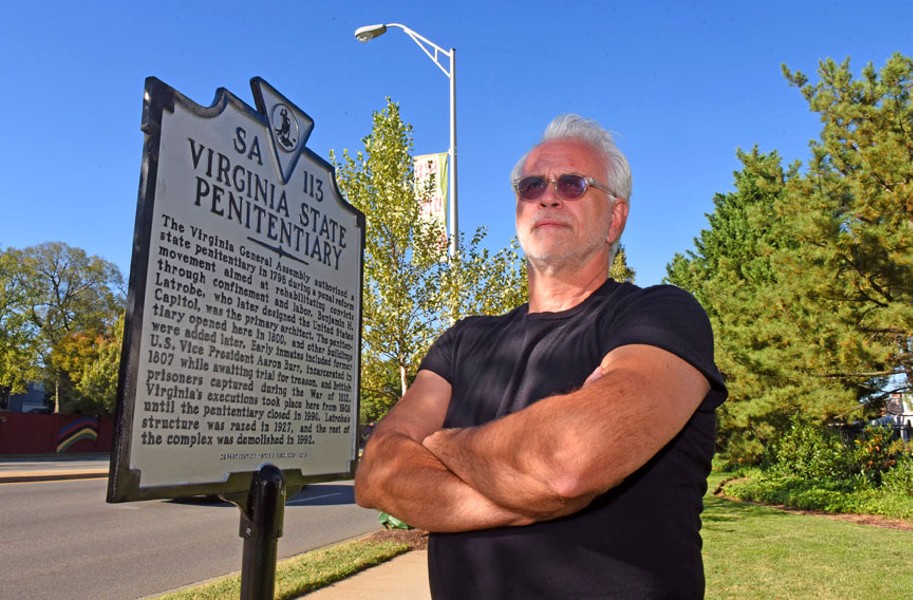 Scott Elmquist Author Dale Brumfield, field director for the nonprofit advocacy group Virginians for Alternatives to the Death Penalty, stands by a historical highway marker by the former site of the state penitentiary at Spring and Belvidere streets.

As escape plans go, it had undeniable panache.

In December 1979, Vincent Rawlings, a 23-year-old convicted murderer serving a life sentence at Richmond's old Virginia State Penitentiary, ascended to a fourth-floor window of an under-construction building where he had stashed the materials to assemble a makeshift hang glider. Freedom was 12 feet in front of him, over a 25-foot-tall security wall.

"A witness said he dropped like a rock, right on top of the wall on the razor wire. … The assistant warden had a great quote. He said, 'It's a good thing he didn't make it over the wall. Otherwise he'd have been a hood ornament on Belvidere,'" says local author Dale Brumfield, whose new book, "Virginia State Penitentiary: a Notorious History," chronicles this ill-fated escape and many other grim and gruesome tales from the nearly 200-year history of the commonwealth's most infamous prison.

It might beggar belief 26 years later, but until it closed in 1991, the state penitentiary — then home to Virginia's electric chair — was at Belvidere and Spring streets, just across from Oregon Hill and barely a half mile from the heart of Virginia Commonwealth University.
The prison was completely razed in 1992, just three months after it closed, and its site is today occupied by Afton Chemical Corp. The only remnants of the penitentiary are huge, green copper ventilation cupolas sitting in the yard behind the American Civil War Museum at Historic Tredegar. There was no trace remaining of its infamous history at the site itself until last year, when Brumfield, who works as field director for the nonprofit advocacy group Virginians for Alternatives to the Death Penalty, sponsored a historical highway marker.

From 1800 to 1991, the former state pen was home to a variety of notorious and noteworthy inmates, including former U.S. Vice President Aaron Burr, captured War of 1812 British troops, serial killer Henry Lee Lucas and the monstrous Briley brothers. It witnessed major historical events, such as when the entire population of the prison escaped following the Richmond evacuation fire at the close of the Civil War. And most importantly, the penitentiary set the tone for our entire nation's modern penal system — for good and for ill.

At a time when Virginia's laws still were based on Jamestown-era Elizabethan punishments such as pillorying prisoners and nailing their ears to posts, the Virginia State Penitentiary was a sui generis concept in the fledgling United States of the late 18th century.

Proposed in 1796 by Thomas Jefferson as a place where lawbreakers could be reformed and learn trades, the prison's initial building was designed by Benjamin Latrobe, architect of the U.S. Capitol. When the state penitentiary opened in 1800, its first, lone prisoner was the not-so-aptly named Thomas Merryman, who murdered a romantic rival at the victim's own wedding. He was soon joined by a host of fellow inmates. Though Latrobe's building was demolished in 1927, the prison was a mishmash of structures under constant construction for more than 150 years as the state vainly attempted to deal with constant overcrowding and poor conditions.

The state penitentiary was also home to women and, shockingly, children. Though the women were separated from the men, they were subject to rape at the hands of guards and would raise their young children behind bars. Additionally, many children lived — and died — as inmates, some as young as 10 years old imprisoned alongside hardened adult murderers and rapists. They were leased by the state as labor for hard, life-endangering jobs, working with adults on chain gangs in railroad tunnels and stone quarries.

"You could be 10 years old dragging a ball and chain around," Brumfield says. "They said sodomy was rampant and the children were the sufferers. … It was a terrible situation."

Sadly, such injustices were not in short supply.

For instance, Brumfield's research for the book uncovered involuntary castrations conducted by a prison doctor. And in a Southern state where a black man was electrocuted for literally touching a white girl, the Virginia State Penitentiary remained racially segregated until the early 1970s. Perhaps, then, it's not surprising that the prison was also nationally infamous for systematically torturing inmates. In 1946, Missouri's governor refused to extradite an escaped prisoner to Virginia, decrying the commonwealth's practices, which included flogging and racks, as medieval and barbaric. One particular punishment was particularly notorious — flogging prisoners stretched naked over a barrel. "That's where the term 'having someone over a barrel' comes from," Brumfield explains, "and it was very particular to the Virginia State Penitentiary."

It's fascinating history, but we're not that far removed from it and it shouldn't be forgotten, Brumfield points out: "Nobody knows this stuff. Nobody knows how Virginia used to treat its lawbreakers. We need to make damn sure we never go back there." S