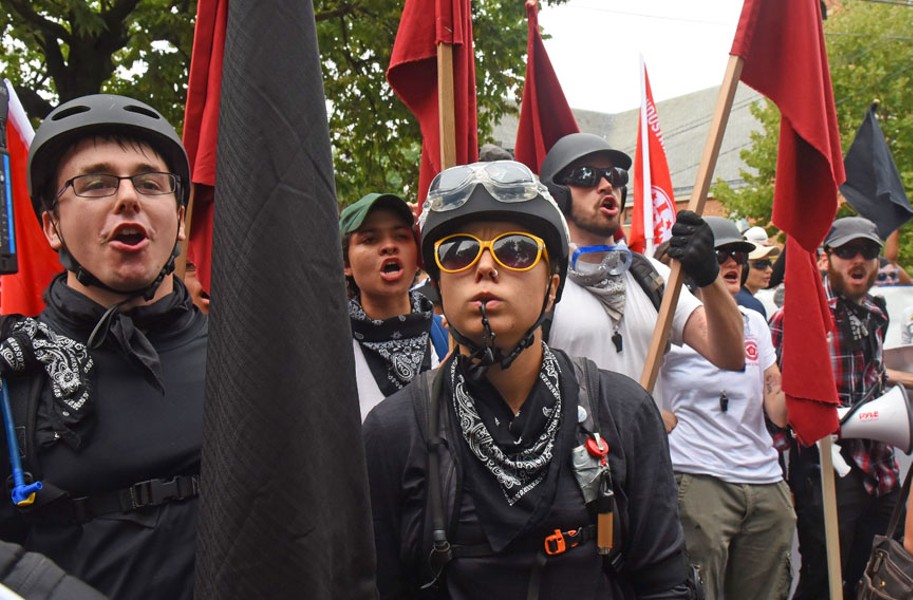 Scott Elmquist Antifa members joined the counter-protestors in August who faced off with Unite the Right marchers in Charlottesville.

Ask historian Mark Bray about the philosophy of antifa, and he’ll say its goal is to shut down fascist and far-right organizations before they can grow.

“Rather than treating fascism as an opinion with which one disagrees, anti-fascists view their struggle politically and seek to deny the far right a platform to organize,” he explains ahead of his book reading in Richmond on Sept. 25. “It’s a pan-left activity of collective self-defense.”

He’s also aware that many people were seeking broader understanding of the movement and its members. It’s to this audience he wrote his recently-published book, “Antifa: the Anti-Fascist Handbook.”

Setting out to collect the voices and experiences of anti-fascists from different contexts and present them to readers, Bray realizes many people are faced with confronting fascism for the first time. To that end, he interviewed more than 60 anti-fascists from 17 countries in North America and Europe.

“I wanted to present the history, politics and theories of anti-fascism, so readers would not only learn but hopefully act against efforts to ‘make racism great again.’ Though I am a professional historian, I don’t think we can be neutral about fascism or white supremacy.”

Locals who agree with Bray’s stance, have fallen in line with antifa. Most contacted by Style declined to speak, wary of being exposed to neo-Nazis and white supremacists.

“I got involved around the time [President Donald] Trump was having rallies where his supporters were spitting on protestors, punching and attacking black people, and where you started seeing this pattern of Trump clearly encouraging and inciting violence against people of color, from immigrants and Muslims to black people,’ says a local member of antifa who asked to remain anonymous for fear of retaliation.

She was present at both the July 8 and Aug. 12 rallies in Charlottesville. “Some of these people attacking others at Trump rallies before the election are the same people leading white supremacists’ groups.”

Bray quickly corrects the misconception that antifa advocates violence first. “Violence is usually a last resort after pressuring venues to cancel an event or doxing a group’s leaders or other methods fail.” Doxing is the act of revealing an otherwise-unidentified person online, typically with malice or the intent to shame them. He says anti-fascists resist by any means necessary, but if escalation is unnecessary, they stick to phone calls and boycotts to do the job.

Understanding antifa’s politics means recognizing that it’s only the tip of an iceberg of monitoring and organizing. He likens the time involvement of committed anti-fascists to having a second job entailing mostly thankless drudgery behind a computer screen tracking neo-Nazis across multiple social media platforms, figuring out where they work and live and whom they contact.

“Generally, [antifa‘s] politics entail focusing on direct action strategies and leveraging public opinion against fascism,” he says. “Sometimes antifa will block a white power march. Other times they’ll show up at the rally location early to take over the space. They call venue owners to cancel events, organize public education campaigns and set up cultural activities.”

So why such disdain for a loose network of people who simply want to resist white nationalist movements?

“A lot has to do with misinformation. The media’s done a terrible job cobbling together the basics of what anti-fascism is about,” Bray says.

Part of his intent is to educate a younger generation less familiar with political protest. Although he didn’t tailor the book to any single demographic, he’s hoping his book equips people with a wider knowledge of specific strategies and historic tactics.

And if it seems like there›s more antifa activity lately, that’s because there is. Many groups interviewed formed during the presidential election or the weeks afterward. Explains Bray, “This reflects the fact that the rise and fall of anti-fascist organizing historically has everything to do with the perceived threat of fascism on a local or regional level”

Bray sees evidence that antifa’s tactics are making a difference. Cornel West and clergy thanked antifa for saving their lives in Charlottesville. After that unrest, more than 60 alt-right demonstrations were canceled. More universities sought to cancel white supremacists’ events.

“We have to remind folks that there are so many ways to fight back,” says the anonymous counterprotester. “Charlottesville was a perfect example of various groups and various tactics — from civil disobedience to proactive community defense — working together to keep people safe and show a united resistance at the same time. It was truly beautiful.” S