Is the dawn of electric vehicles finally here? New Virginia laws are being applauded by dealers, environmentalists and utilities – but there’s a catch.

Scott Elmquist There are roughly 600 charging stations for electric vehicles in Virginia – mostly in the Washington suburbs. Here, a charging station is pictured at Willow Lawn in Richmond.

For years, electric vehicles have been a great, unrealized dream for the environmentally minded.

The vehicles, known as EVs, are more efficient and much less polluting than petroleum-powered, internal combustion cars and trucks. But they have been very expensive and impractical because of their limited range between recharging.

Finally, that seems to be changing in a big way. Major automakers General Motors, Volkswagen and Volvo recently announced they’d go all-electric in a decade or so. Prices for the vehicles have been dropping for months. New networks of charging stations are being erected.

President Joe Biden wants 500,000 charging stations across the country by 2030 and plans to switch vehicles owned by the federal government, such as U.S. Postal Service vans, to be electric.

Virginia has stepped up preparations for more of the vehicles. On March 19, Gov. Ralph Northam signed a law that would increase the number of EVs and hybrids that dealers must sell. He directed the State Corporation Commission to review policies to boost their use.

The new laws are applauded by car dealers, environmentalists and utilities such as Dominion Energy Virginia.

“Five years ago, you would never have seen a TV commercial for electric vehicles. But they are there now,” says Steve Banashek, who heads EV promotion efforts for the Virginia chapter of the Sierra Club. He rated recent work by the General Assembly on the vehicles as “phenomenal.”

Passed was a bill that would provide a $2,500, on-the-spot payment for anyone who buys an EV in the state. Qualifying lower income people can get an extra $2,000 payment. Buyers can also get a $7,500 federal tax credit.

That may sound generous, but there’s a catch. The state legislature did not set up a method of funding the rebates.

“You have to put your money where the mandate is,” says Don Hall, president and chief executive with the Virginia Automobile Dealers Association. He says he is disappointed that the General Assembly did not find away to fund the new rebates which are “a sea change for Virginia.”

Hall’s view shows just how much the politics of EVs have shifted. Several years ago, his advocacy group got into a major tussle with Tesla, the innovator owned by technology guru Elon Musk. Tesla wanted to sidestep dealers selling its cars in Virginia and Hall’s group took him to court. The dispute has since been resolved.

The price of Tesla models has been a major sticking point in the spread of EVs. Models can cost as much as $140,000 although more recent Teslas are in the $40,000 range.

More affordable EVs include the Hyundai Kona, the Chevrolet Bolt and the Nissan Leaf e+.

Kenya Reid, a saleswoman at Hyman Bros. Nissan, likewise says there’s been more interest in the past 90 days. She sells a Leaf Plus starting at $39,615 with a 215-mile range and a regular Leaf with a 150-mile range for $34,700. The prices are before tax credits and rebates are applied. She notes that Nissan will offer the Ariya crossover model later this year.

As prices drop, range is going up. So is the number of charging stations.

Rose says that the Chevrolet Bolts have three levels of charging. One uses an at-home plug intended for overnight charging at the rate of 8 miles per hour. A faster model can charge at 24 miles per hour. The fastest available takes only 30 minutes to bring a car battery to 80 percent charge capacity.

In Virginia, most charging stations – there are said to be 600 of them – are in the Washington suburbs but they are increasing in the Richmond area. Danna Markland, chief executive of the Home Building Association of Richmond, says that contractors are putting in more charging stations at multifamily projects. “They are also prewiring so more can be installed later,” she says.

Dominion Energy Virginia, which has been busy rebranding itself as a green utility, sees good opportunities. The company has backed recent EV legislation in the General Assembly and is working on a regional basis with other electric companies to expand networks of charging stations to make longer road trips more practical. 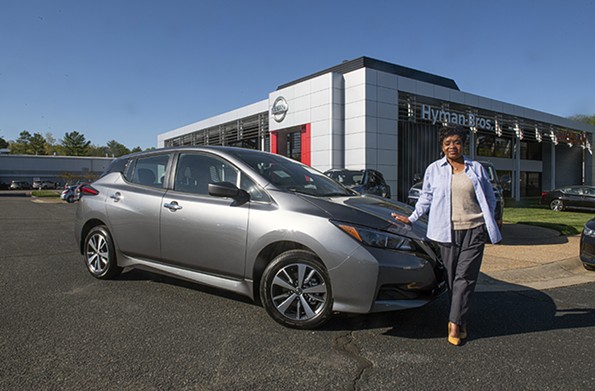 Kate Staples, Dominion Energy Virginia’s manager of electrification, says the stations could charge a car in 30 minutes. Some of the stations will charge users who can download special cell phone apps to find out where the nearest charging stations are. EV owners can pre-purchase cards allowing them access to charging station electricity. Some are free.

While the vehicles are far less polluting than gasoline- or diesel-powered cars and trucks and their fuel and maintenance costs are far less, they aren’t completely clean.

The electricity used for EVs can also come from polluting sources such as coal or natural gas. Dominion Energy Virginia still operates large coal-fired plant at Chesterfield County but is expected to retire it in about four years. The company still relies on natural gas but canceled its highly controversial Atlantic Coast Pipeline that would have taken natural gas from West Virginia through Virginia to North Carolina. Meanwhile, the utility has announced ambitious new plans for more renewable power, including a massive wind turbine farm from Virginia Beach.

Dominion’s Staples says her company is studying how to meet the future extra demand for power that EVs are expected to cause. The evaluation may be ready next year. It is also studying how to encourage recharging at off-peak times when power is cheaper and more available.

Dominion has also run into some trouble when it pushed an idea to have ratepayers pay for new fleets of electric school buses. At one point, the plan called for as many as 1,200 such buses. But the plan drew criticism at the General Assembly and was shot down.

According to Gary Greenwood of the Virginia chapter of the Sierra Club, one reason for the increasing popularity of the vehicles is that Donald Trump, “who tried to push it backwards,” is no longer in office. Biden and his fellow Democrats are embracing them.

He drives a Tesla and finds that there are more charging stations in places he didn’t expect. Besides helping stem global warming, EVs have distinct positives.

“We only go to the gas station when we need an inspection or a tire,” he says. “I don’t have to buy gas. The amount of money you save is huge.”

Back to the Environmental Issue