A Neighborhood Friend, Shot Through Her Window 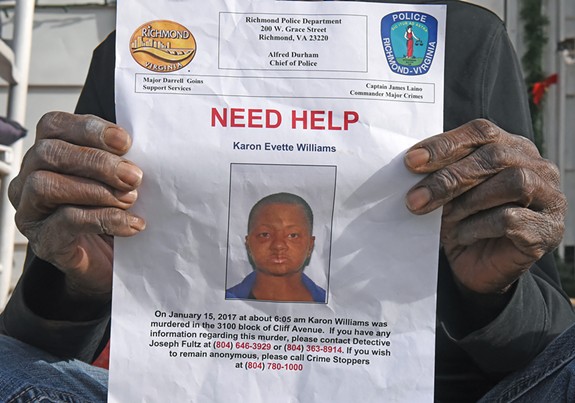 Shirley Robinson didn’t hear the gunshot that killed her neighbor and friend, Karon Williams. But she heard a strange noise Sunday morning, like someone kicking or banging on a door or shed.

She’s used to hearing commotions behind her house on Cliff Avenue, she says, which backs up to a wooded ravine -- “kids and young people in the summer.” But her Brookland Park block is fairly quiet, and the sound was coming from across the street.

Not long after, around 7 a.m., police cars flooded the area, lights flashing. Williams was shot through the back window of her house. She died later that day. Williams’ cousin, who lived with her in the duplex, called Robinson to tell her the news.

“She said, ‘I don’t know why Karon got up out of bed,’” Robinson says.

“But she got up for the same reason I got up,” she says of Williams, who was dealing with serious medical issues. “You hear something like that, you’re gonna look. I mean, I’m not going to the door, but Karon had just gotten out of the hospital, she might’ve been on medication. I don’t know what she was thinking.”

Robinson served in the military for eight years, no stranger to death. But telling her 6-year-old granddaughter, who lives with her, was tough.

“I showed her pictures of Karon, and I said Karon left us,” Robinson says. “She cried and cried, so I hugged her and let her cry and get it off her chest.”

“She said, ‘Grandma, that’s why you tell me don’t stand at the window.’”

Robinson says her warning was about being near the window during storms. But the 6-year-old took it to mean at all times.

Williams, 57, grew up in the neighborhood, right next to Robinson, and was a classmate of Robinson’s younger sister. Williams has a son in his 20s, Robinson says.

“Karon was a blessing. You could depend on her,” Robinson says. “Anything you needed -- she’d see you doing something hard -- she would come over and help.”

Williams drove her to the store at night and helped her with such chores as recycling, gardening and sweeping.

“My house is full of [Christmas] decorations,” Robinson says, “and she helped me put up a lot of that -- reindeer, snowmen, all that stuff.”

When the cousin called Sunday, Robinson was in disbelief.

“I just went to pieces. It tore me up,” she says. “It’s so weird. You wake up and you think, she’ll be out there, but you know it’s not going to happen.”

Williams was a frequent guest of Robinson’s porch and beloved by neighborhood children. “All the kids were crazy about Karon,” Robinson says. “She would play with them, and she had two dogs, puppies, and they loved to play with the puppies.”

By Tuesday afternoon, the street is quiet again. There are young children on porches with their parents, and school buses pass by.

A woman walking her dog says she knew Williams by the white Shih Tzu she walked -- the same breed of dog as hers. “I hope that little dog is OK,” she says.

Another neighbor knew her in passing. He’s confused by questions about Williams. “Was she somebody special?” he asks. “It’s the first time I’ve seen anybody come down and try to find out what’s going on other than police.”

Richmond authorities say they’re still searching for suspects and hope someone who knows what happened will come forward.

Robinson thinks it was a case of mistaken identity, or that Williams disturbed a robbery in progress. “You don’t see people that mess with a family,” she says. “She didn’t bother anybody. I’ve never seen any enemies, nobody ever talked bad about her.”

“I wish there was something I could do, or someone had the conscience to say something,” Robinson says.