A Mouth Full of Glass Teeth 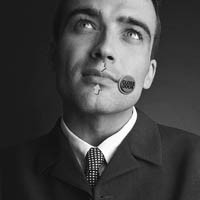 I saw her approaching and held the door with my foot. She knew I would, a tall, beautiful woman who would make anyone feel like she was in charge, as if we are all her employees.

She never even acknowledged me, just turned sharp around and stared straight ahead.

I could smell vodka on her, but a good quality of booze. I saw her glance me up and down as she slipped through the door and I made a quick mental note of her exquisite shifting of hips, beautiful freckled chest, single manila envelope and a pair of 19th-century leg shackles which hung heavy from her right hand. Most people wouldn't keep straight; they couldn't play it cool. Not me. I've seen this before.

Since I began working security at this law firm, I've gotten used to seeing people walk around with their dirty laundry all out in the open.

Attractive wife and attractive husband aren't attracted to one another anymore. But going their separate ways is never that easy. He wants this and she wants that. Well, to get this and to get that you need leverage.

I see it all now. Her husband is one of those weekend Civil War tailgaters, likes to grow interesting sideburns, wear wool, a real cadet.

He's probably got a whole collection of uniforms, old cannons, tents and of course leg shackles. I don't know which side he's on, but I think shackles are nondiscriminatory.

Now you know she isn't going to drag a cannon into the building, so at least she is going to jingle those irons around to let everyone know, you know, the whole oppression thing. This is her leverage, kind of like a ransom hostage. Shackles held hostage.

Yeah, I got her figured out.

As the elevator slowed itself to a stop, I developed a slow ache in my groin.

She turned and spoke just as the doors were opening.

"That's really depressing," she said in a high-pitched voice while eyeing the large, white marble statue I was carrying. It was a carved image of a woman in a flowing gown, kneeling facedown like she is crying on a grave. Her face is buried in her own arms. I had affixed a red bow to it. This was a present for my mom. It was her birthday. I purchased it on my lunch break from an estate sale I passed on my way to the Smoothie Shop.

"I know," I said as I began to sweat and stutter. "It's the whole oppression thing." I let her walk out first.

Michael Dulin is a 28-year-old writer/playwright living in the Ashland area who has written stories inspired by his daily drive past the Tyson chicken plant. Dulin enjoys writing silent plays with his theater company, PunkSinatra, and has recently begun a career in pirate-themed children's birthday parties. He holds a degree in anthropology from Virginia Commonwealth University and has written for RVA magazine and Brick.