Galleries face a perennial choice: exhibit the work of well-known professionals or give emerging artists a chance. This summer Reynolds Gallery chose both.

The gallery has built a bridge between the fresh and the polished by offering two shows: "Almost Famous," featuring a handful of recent graduates and emerging artists, and "Summer Solstice," showcasing mostly new work from their established artists.

In the new crowd, two stand out: Jason Keith and Laura Vitale. With a background in comic book design, Keith is studying painting at Virginia Commonwealth University. His large-scale, mixed-media works have the presence of midcentury abstract paintings, but with a contemporary edge. The top layer is mousselike and highly textured, while the undertow has glints of text, color and comic-strip imagery.

What Keith does for the eye, Vitale does for the ear. In "The Circles Dune" installation she creates a "lens of sound" with a huge balloon filled with carbon dioxide. Intermittent deep, underwaterlike notes waft through the gallery. The balloon has been ink marked with a visual trace of the sounds, and a calla lily plant sits nearby to process the carbon dioxide that leaks from the balloon. In this way, a novel concept and presentation become a microcosm of the way object, light, sound interact with each other on this planet.

Among the works by veterans, Isabel Bigelow's simple "Narcissus" invigorates the oil-on-panel tradition. A black iceberg form sits on a white canvas, looking almost like a silk screen. The mythical Narcissus stared at himself in a pool so everlastingly that he died doing it. Perhaps Bigelow makes a poetic comment on the state of our environment in a minimalist play of positive and negative space.

In another black-and-white composition, Jack Wax's "Turn-tree" presents ink and coffee on paper as a tree made of intricate, veiny threads. Only part of the tree exists on the paper, moving off the stage into imaginative space. The dimensionality of this piece betrays Wax's background in sculpture and his role teaching glasswork at VCU. 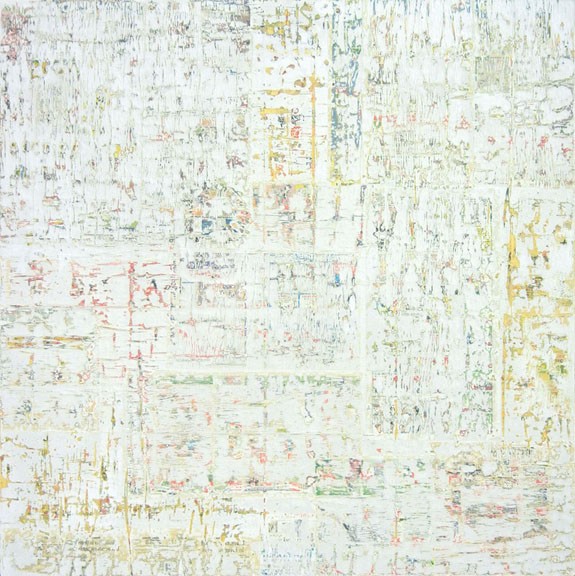 Although the gallery featuring emergent visions is small and humbly populated, and while the ideas being expressed there are perhaps less sturdy, these are works of exploration. The energy among the budding six is jazzed and full of potential. By comparison, the expanse of mature artists is far more developed and dependable. The energy is streamlined; not dull, but steady. The difference between the two groups is palpable. It suggests that whether artists are at the beginning or the height of their careers, their work has more subtle values to consider — no matter their prices or how many exhibitions they might list. S

"Almost Famous" and "Summer Solstice" will be on view at Reynolds Gallery through Aug. 17. For information go to reynoldsgallery.com or call 355-6553.