A Match Made in Heaven

At Pies and Pints, it’s all about the pizza and craft beer. 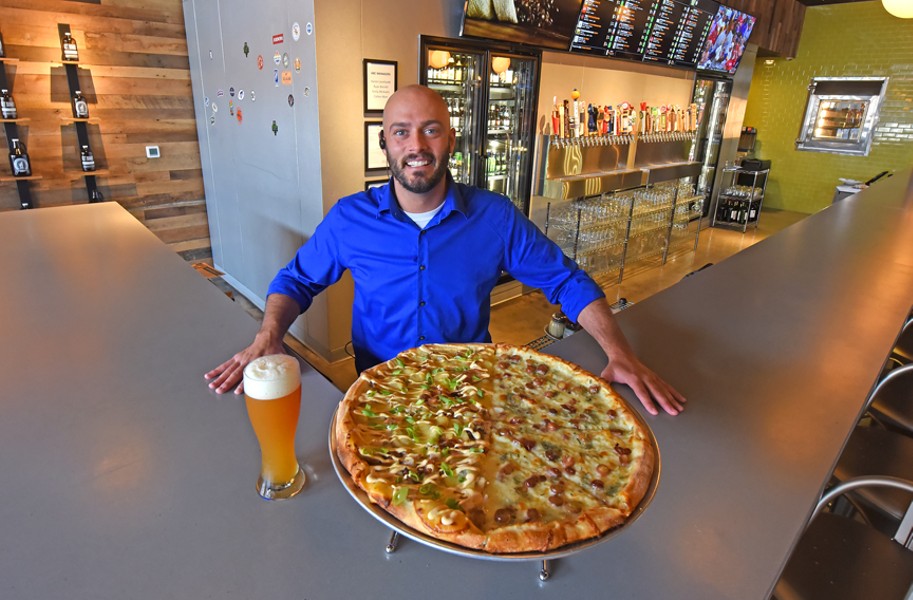 Scott Elmquist Feeling indecisive? Pick two specialty pizzas for one pie, like this chicken Gouda, at left, and grape and Gorgonzola presented by Pies and Pints’ general manager, Aaron Leonhardt.

Is there anything more polarizing in the pizza world than pineapple? Whether the thought of it as a topping makes you gag or you're firmly in the gimme-that-pineapple-with-ham camp — it also pairs beautifully with sausage, but nobody asked me — chances are you have an opinion. Some restaurants have embraced fruits on pizza, like the Daily Kitchen Bar with its fig-and-pig pie. Now, a new spot in town is here to introduce another sweet and surprising topping: grapes.

The grape and Gorgonzola is the first specialty pizza listed on the menu at Pies and Pints, and there's a reason for that. Unusual as it may be, the blend of sweet, funky and fresh makes it one of the franchise's most popular items. It's one of more than a dozen specialty pies available, and others include Sriracha shrimp with pineapple, black bean with cheddar and salsa, spinach and garlic, steak and mushroom and a classic Margherita. Each pie is available in two sizes, and you can split a large into two specialties, and I recommend this approach. The crust is thin but firm enough to support an abundance of toppings, and chewy without being underbaked. It's not quite Neapolitan, not exactly New York style — general manager Aaron Leonhardt describes it as "handcrafted artisan style pizza."

"I compare pizza to the craft beer world," says Leonhardt, who came to Richmond from the restaurant's flagship location in Morgantown, West Virginia. "As you know the craft beer scene is just huge, and each brewery puts a lot of heart and soul into the product. All of it is precise and how they want it, and I tell people that's kind of like our pizzas."

Each Pies and Pints kitchen uses a four-tier rotating oven with stone slats, which Leonhardt says "crisps up the bottom but doesn't burn it."

You can also create your own pizza with toppings like artichoke hearts, sweet-hot peppers, six cheeses, pulled pork and marinated grilled chicken. With toppings each costing from $1.50 to $3, though, you might be better off choosing from the specialty list.

Also on the menu are chargrilled wings, chips and salsa, pork nachos, salads, sandwiches on ciabatta and a couple desserts.

As for the "pints" portion of Pies and Pints, it lives up to its name. With 36 ever-rotating taps and about 55 bottles and cans, there's something for everybody. The draft list is divided into categories like crisp and bright, toasted and nutty, fruity and spicy, hoppy and strong and boozy. Leonhardt says roughly half of the draft list will usually feature Virginia beers, and Pabst Blue Ribbon is always available. A nonalcoholic root beer from Utica, New York, which Leonhardt describes as "out of this world" is on tap, and cans of gluten-free and nonalcoholic beers are also on the menu.

Pies and Pints quietly began serving pizza and beer May 7, and now that the team's ready, Leonhardt says, the official grand opening is Wednesday, July 26. Opening festivities will include 25 percent off six signature pizzas, a tap takeover with six beers from Ardent Craft Ales, and 3-6 p.m. happy hour featuring $2 off appetizers and $1 off draft beer and house wine.  S