The Virginia Museum of Fine Arts has shown Richmond plenty of love in recent times.

Some seasons back it brought us Pablo Picasso like we’re not likely to experience him in these parts again. The Auguste Rodin exhibition was a revelation, even though we thought we knew “The Thinker.” And earlier this year colorful works by contemporary comet Kehinde Wiley all but ignited the galleries on the museum’s lower level. Now there’s happiness to spare on the Boulevard with the return of dazzling objects from the workshops of Peter Carl Faberge to an expanded and elegant re-installation.

But two titans seldom mentioned in the same breath — but who burn as brightly as the aforementioned in the crown of art — will share the special exhibitions galleries and have a conversation during the holidays and into the new year when “Jasper Johns and Edvard Munch: Love, Loss and the Cycle of Life” opens Nov. 19.

On display will be 64 pieces by the still-active Johns, who at 87 may well be the dean of American art, and 48 works by Munch (1863-1944), the Norwegian master whose “The Scream” may eclipse any other work of modern art in terms of recognition and angst.

But don’t expect a survey course. “Love, Loss and the Cycle of Life” will take deeper involvement.

Curator John Ravenal, executive director of the deCordova Sculpture Park and Museum in Lincoln, Massachusetts — who formerly was the Sydney and Frances Lewis family curator of modern and contemporary art at the museum — has something on his mind.

It is this: At some time in the late 1970s, Johns shifted his fascination with the line and the surface of his medium de jour to begin a series of crosshatch works. And switch it out he can — he does painting, printing, sculpting or collages with equal finesse.

As for his crosshatch series, these highly intentional strokes became as iconic of his output as his depictions of the American flag, a target, or a couple of Budweiser cans. And because authorities consider his printmaking abilities to be to up there with the greats of all time, such as Albrecht Dürer, Francisco de Goya and Rembrandt, it stands to reason that he gave considerable thought to his sources for linear inspiration.

In the exhibition, Ravenal uses this intriguing artist pairing — Johns of Augusta, Georgia, and Munch from Oslo — to examine how Johns was moved to study Munch’s use of line and especially crosshatching.

Yes, Johns is alive and accessible. But he’s famously ambiguous and coy when it comes to discussing his work. Sebastian Smee, an arts writer for the Boston Globe, has written that one of the reasons Johns’ work is so difficult to decipher, “so tender to the touch, is that it is stuffed with allusions and clues that amount to a secret order and logic, and thence to what might be thought of as ‘meaning.’ And yet, frustratingly, it goes out of its way to obscure meaning.” 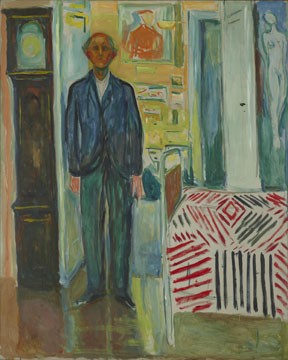 Johns, who influenced the pop artists of the 1960s, used objects such as handprints and impressions of objects found in his studio. What they mean is open to interpretation. In this exhibition, which received bravos from the international media during its showing in Oslo where it opened, Ravenal pulls Munch into the picture.

Is Munch’s work just another found object for Johns? We do know that the American artist saw a major Munch exhibition at the Museum of Modern Art in 1950 soon after arriving in New York to attend the Parsons School of Design.

Of course, this should lead to another frustrating question: What inspired Munch’s work, technique and line choices?

“Clear meanings are for children and lawyers,” Smee says.

When visiting “Love, Loss and the Cycle of Life,” any answers may very much be up to you. The handsome catalog authored by curator Ravenal will be useful on that quest. S

“Jasper Johns and Edvard Munch: Love, Loss and the Cycle of Life,” runs at the Virginia Museum of Fine Arts, Boulevard and Grove Avenue, from Nov. 19-Feb. 20.