Barksdale's "Lend Me a Tenor" pays off with laughs aplenty. 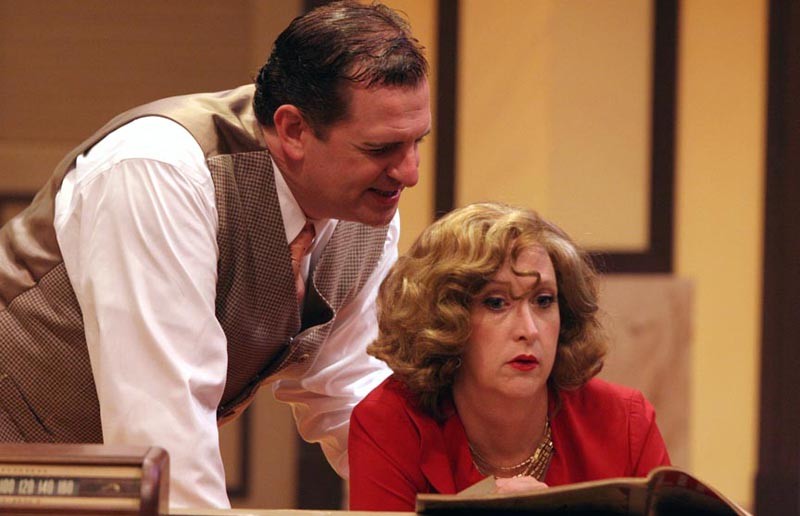 In the best stage farces, there's a moment when you can't imagine the situation getting any further out of control. And then something happens that pushes the mayhem into a whole new realm of crazy. In Barksdale Theatre's sparkling rendition of "Lend Me a Tenor," that surprising moment occurs deep in the second act and it leads to both wild complications and a neat resolution, putting the final cherry on top of what already is a satisfying comic concoction.

The effectiveness of "Tenor" springs from a deceptively simple launching point: It's 1934 and world-famous Italian opera star, Tito Morelli (Joe Pabst), arrives in Cleveland for his American debut. Max (Nick Ciavarella), a stage lackey, has only one task: to make sure "Il Stupendo" gets to his performance on time.

But somewhere between the badgering of Morelli's wife (Susan Sanford) and the near hysteria of company manager Saunders (Frank Creasy), the tenor takes a turn for the worse, forcing Max to step in for him. The resulting misadventures stretch the bounds of believability, as farces usually do, but also provide nearly nonstop laughs.

The central duo is integral to this production's success, and the contrast between Pabst's Tito (expansive and emotional) and Ciavarella's Max (antsy and insecure) facilitates some great comic chemistry. The two actors capitalized on this basic dynamic during a hilarious unscripted mishap involving a bottle of wine on opening night. In the second act, Max steps to the fore, and it's here that New York import Ciavarella truly shines, showing impressive range. He's assisted by the assured direction of Scott Wichmann, who slows the fevered pace at a couple of key points to allow comic tension to build. He also punches up some of the script's double-entendres to great effect.

Designer Brian Barker's sturdy hotel suite set allows for plenty of door slamming, and there are some fine actors manning the doorknobs. As the opera company's ambitious floozy, Nicole Oberleitner slinks her way fetchingly through her few scenes, while Christopher Stewart turns his every move into a punch line as the insistent hotel bellhop. Playing Max's reluctant girlfriend, Aly Wepplo effectively projects both innocence and daring in her single-minded pursuit of an intimate moment with Tito. The play's only misstep involves the opera company's board president, a character who's somewhat perfunctory even when played with gusto by Jan Guarino.

"Tenor" kicks off the 2011-'12 theater season with some hearty belly laughs, a promising bellwether for shows to come. S

"Lend Me a Tenor" plays at Barksdale Theatre at Willow Lawn through Oct. 16. For information, go to barksdalerichmond.org or call 282-2620.