The late Richard Carlyon set the bar for artistic exploration, integrity and influence. 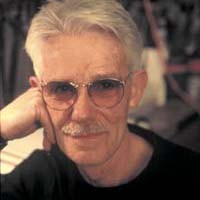 It's the muggiest of Friday summer afternoons but the temperature inside the relentlessly white-walled Anderson Gallery is like an ice box.

>The Richmond artist and longtime charismatic Virginia Commonwealth University professor was prolific and always contemporary for almost half a century as his work blurred differences between painting, sculpture, collage, filmmaking, performance, photography, printmaking, conceptualism and dance.

Using a ruler for accuracy and dozens of photographs as reference points the Anderson staff has placed Carlyon's countless tubes of paint, meticulously cleaned brushes, assorted ephemera (what are those plastic Batman masks doing there?) and hundreds of recordings — a collection ranging from Aretha Franklin to Pet Shop Boys to Bobby Short — on shelves and in spaces approximating the artist's meticulous West Broad Street loft work space.

In other rooms throughout the gallery, drawings, paintings and prints will be hung chronologically, from his earliest collages to later works that included ink-on-parchment plottings of Martha Graham's choreography. “I am interested in how dance infiltrated everything he did,” Kistler says as she contemplates the unusual one-man show that will be held in three venues in addition to the Anderson.

“Richard Carlyon: A Retrospective” opens simultaneously Friday, Sept. 11, at the Anderson, at 1708, a gallery Carlyon helped found, at the Visual Arts Center and at the Reynolds Gallery, which presented the last show of his career. This collaboration, rare even in a city where visual arts organizations are mutually supportive, is shaping up to be far more than a penetrating and exhaustive look at one artist. It's a celebration and an extended goodbye to a modest individual who set a consistently high bar for what it means to be a thoroughly engaged thinker, educator and craftsman.

“It's astonishing what he accomplished in that Broad Street studio working quietly,” Kistler says, watching his studio space re-emerge in the gallery setting. She recalls how VCU sculpture professor Lester Van Winkle once pulled his students to the window to witness sprite-like Carlyon make his way along a Broad Street sidewalk en route to his studio. “He asked the students if they knew that white-haired guy in the black jacket,” she says. “He asked if they knew where he was going. It was wonderful for Van Winkle to be able to talk to the students about Richard's commitment to his work and his work habits. If they stood there at that time every day they would see him go to his studio.”

>To those who knew him — and those who didn't — Carlyon embodied artist discipline. “In that regard, he was an unsung hero,” Kistler says. “Being productive in the studio every day and teaching took precedence over everything else.”

During his lifetime while Carlyon neither sought the spotlight nor regularly exhibited in New York he steered toward the cutting edge of broader art world trends while continually pushing himself intellectually. He began his career as a painter, explored dance and then pushed his work from abstract to conceptual.

“It's amazing how many people don't know his work,” says Beverly Reynolds, curator and owner of the Reynolds Gallery, which will present two shows as part of the retrospective. “Early and Late” includes 24 works ranging from oil paintings from the late 1950s — “It shows what a good artist he was to begin with” — to works in the 1960s and '70s, “when he started to pare things down,” says Reynolds, who was a student of Carylon's at VCU soon after moving here with her husband in the late 1970s. The “Eleanor” exhibition will feature drawings of Carlyon's wife in a black bathing suit. “She kept coming forward, she kept being present,” Reynolds says of Eleanor Rufty, whom Carlyon married in Richmond in 1962 and who's also in the top tier of Richmond artists. “The drawings he did of her are very sexy — Eleanor the muse.”

At the Visual Arts Workshop, its curator, Katherine Huntoon, is presenting a show entitled “Chance.” The 15 works done between the 1950s and 1990s at 1708 are being packaged as “Interval.” Here, co-curators Brad Birchett and Gregg Carbo, who both studied with Carlyon, are seeking to present “a mediation between polarities,” Birchett says. “Dick's work deals with the spaces between here and there. One's eye can be directed to those spaces and those spaces can be activated [by the artist] or ignored.”

“There was such a wealth of work,” the Anderson's Kistler says of the multigallery endeavor, “there was plenty of riches to go around.”

>In truth, this fall's retrospective has a collaborative reach beyond the four venues. Soon after Carlyon's death in 2006 a number of fellow artists and friends — with his family's blessing — mounted an exhibition at the Reynolds of photographs and works on paper. Exhibition sales provided seed money for the current undertaking and its 96-page catalog, with essays by Howard Risatti and Wesley Gibson and graphic design by John Malinoski. An appeal for support garnered more than 100 enthusiastic responses, including former students, colleagues, his patrons, corporations and the university.

Carlyon's career also was closely intertwined with the evolution and growth of VCU's School of the Arts. Born in Dunkirk, N.Y., a fishing and steel town on Lake Erie, Carylon was a liberal arts major at the University of Buffalo who was inspired by painters Miro and Soutine to study art. In 1950 he enrolled at Richmond Professional Institute, the predecessor to VCU, in art studies and received a bachelor's degree in fine arts. For his physical education credit he'd taken dance. In 1953 he hoped to study dance in New York with Martha Graham, but was drafted and served in Europe immediately after the Korean War.

>In 1956 RPI's head, Henry Hibbs, offered him a semester teaching position in dance and choreography. He continued to paint and soon moved to New York where he struggled to make the $18 a month rent for his apartment. His return to RPI for graduate studies in art on the G.I. bill led to a job as a full-time instructor in commercial art. His breath of interest were manifested in a series of “Bang” arts festivals held here from 1964-'67, and he moved from positions in the painting and printmaking department to art history with apparent ease. All the time he worked on his own development as an artist. By 1997 he had turned heavily to drawing.

“Carlyon came to art at a time when artists were preoccupied more with making art than with careers,” art historian Rissatti writes in his catalog essay.

It's almost quitting time but the Anderson Gallery bell rings and a casually dressed young man approaches the installation in progress. It's Carlyon's 37-year-old son, Jason, a VCU professor of microbiology and immunology. He chats with the gallery staff and inspects the re-emerging of his father's studio which he first visited two decades ago. “After I got my driver's license, I'd sometimes pick him up at the studio,” he recalls. “I remember walking up the steps and seeing this for the first time. It was packed with paints and brushes. There were a lot of paintings and collages with two or three paintings on the floor. I'd never paid much attention before to what he was doing. But I was standing there with my jaw open and thinking, ‘How cool is this?’”

>After the Anderson Gallery staff says its farewells for the weekend, Jason Carlyon is allowed to stay behind to lend his own hand to the effort, placing the brushes and paint tubes — the tools of his father's trade — carefully in place one last time. Later that evening, his mother, Eleanor, will join him in the quiet ritual.

Honoring Carlyon
“Move: A Tribute to Richard Carlyon,” will be presented by the VCU Department of Dance and Choreography on Sept. 26 at 8 p.m. at the Grace Street Theater, 934 W. Grace St., 828-2020 (reservations recommended).

“Richard Carlyon: A Retrospective,” will be on display starting Sept. 11 with different exhibits at the following venues: