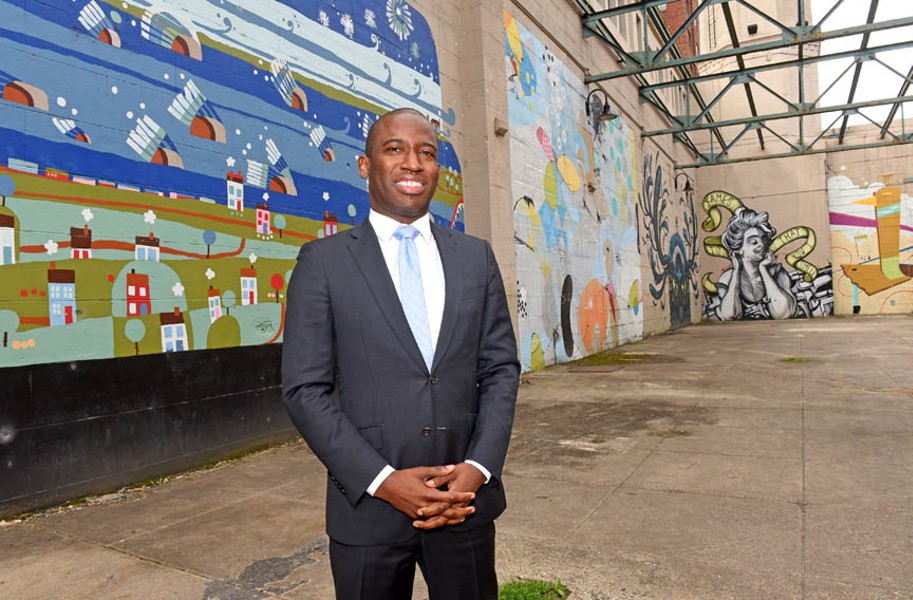 Scott Elmquist Richmond Mayor Levar Stoney hopes to enliven City Hall with murals like these in the old power plant on the Canal Walk.

On a dreadfully overcast afternoon, Mayor Levar Stoney doesn’t miss a beat in his new role at City Hall. “It’s another Monday in the great city of Richmond,” he says, as gray clouds hang.

Richmond’s 80th mayor isn’t being glib. If there’s an opportunity to promote the city’s growing talent pool, then from his perspective, it truly is a beautiful day.

That’s why Stoney is pushing through with a long-awaited makeover of City Hall’s interior — which is seriously ugly, he’ll be the first to say.

“Have you walked through here before? It looks like a school from the ’70s. Or a clinic,” Stoney says, sounding almost incredulous. “You could say it’s in need of an aesthetic update. That’s really overdue, I would say.”

Just don’t expect the update to be gaudy or overbearing. As a fresh-faced 35-year-old known for his taste in neat suits, Stoney is stamping the makeover with his trademark youthfulness. There will be no trotting out a Winston Churchill bust, à la President Donald Trump. And Stoney assures that he’s not a vain administrator, so there will be “no self-portraits of me peering down on my friends.”

But visitors can expect some spring cleaning. For starters, schoolchildren’s art in the mayoral suite is likely to go. “I’m sure these kids have probably graduated high school by now,” Stoney jokes. “I’d love to get this artwork back to them, and bring in some new artwork throughout the building.”

The goal is to employ or buy from local artists, both well-known and not, representing a wide range of styles and subjects. Toward that end, Stoney has commissioned scouting help from public arts coordinator Ellyn Parker and one of his spokesmen, Tom Byrnes.

Richmonders may be familiar with Parker. At town hall meetings, she’s asked for suggestions on how to responsibly use the city’s public art budget. She recently requested makeover ideas for the Hull Street Library.

But City Hall is “a grand canvas,” Parker says, and she’ll work with Byrnes to figure out equitable ways to include Richmond’s various creative people.

Byrnes, who was hired just before Stoney’s election, arrives by way of Washington. He’s created art for spaces as diverse as the John Glenn Institute (yes, the astronaut) and the U.S. Capitol. He’s also successfully headed projects in spheres that Richmonders like to debate. To wit: baseball, rail transportation, real estate and neighborhood beautification.

As an example, he says he’d love to see murals in City Hall: “They’re part of why Richmond has such a tangible, diverse and positive vibe.”

As for fulfilling the mayor’s goal of taking City Hall’s appearance to the next level, Byrnes says: “It’s not necessarily going to be an oil painting of the James River. Personally, I’d like to find whoever our local Jackson Pollock might be.”

The duo lays out a feasible early to-do list: Cover the sterile white stairwells with murals. Install art in the press secretary’s office, the mayor’s suite and his personal office. New installation sites are discerned by the day, and collaborations already are taking shape.

“We already have many schools and local partners who say they’d be thrilled to offer rotating pieces in a gallery-type space,” Parker says.

Maintenance will have to sign off on all changes, as will the chief administrative officer. Will taxpayers sign off, too?

Stoney says a budget is still being determined, but Byrnes makes the pitch: “Because City Hall is owned by the citizens of Richmond, and because the arts are such a huge and integral part of Richmond’s identity, I’d personally like to see a significant investment made, whatever that may be.”

Some of that investment may be in the form of temporary loans of artwork, he adds, especially from up-and-coming artists. S