A local nonprofit saves one of Richmond's finest buildings -- and gets itself a new home.

Temple on a Hill 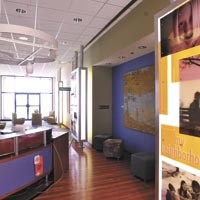 ChildSavers, an organization providing care for local children since 1924, has renewed one of the city's most visible and important mid-20th-century architectural landmarks.ÿ

With impressive war memorials and a Jefferson-designed State Capitol already lodged on certain downtown hilltops, WRVA chose Church Hill, on a bluff overlooking Shockoe Valley, as the new site of its radio station in the late 1960s. The station approached the internationally renowned New York architect Philip Johnson, and he rose to the occasion.
A row of dilapidated brick houses near the corner of East Grace and 22nd streets, in the then-rejuvenating historic district, was demolished and an intriguing, Acropolis-like broadcasting complex was completed in 1968. It was a brilliant move architecturally on the part of the radio station, as the facility all but claimed Richmond: Its broadcasters looked out from their studios through cargo-bay-sized windows over the downtown skyline, the sweep of the James River and the curves of Interstate 95.
But equally impressive as the views from WRVA are closer-up views of the deceptively simple, one-story building with its adjacent multistory tower. From the nearby streets and sidewalks one sees a rectangular box that maintains the domestic scale of the adjacent 19th-century town houses. The structure's inherent modernism signals boldly that this is unabashedly a product of the Space Age: Its poured-in concrete walls are icebox white and the exterior surfaces animated brilliantly by marble flecks that sparkle in ever-changing daylight. The large windows, containing unbroken panes of tinted glass, are rectangular and square with their corners rounded off to soften the visual impact.ÿ
When viewed from below in Shockoe Bottom, the gleaming white structure and its tower read in crisp counterpoint to downtown's myriad sandstone and red-brick structures. It is heroically classicist in intent and reality.
"This is the most beautiful building in the world," the mercurial Johnson reportedly exclaimed, stepping from his limousine on dedication day in 1968 (this was perhaps an exaggeration because he'd recently designed some of his most iconic buildings, including the New York State Pavilion for the 1964 New York World's Fair, a theater at Lincoln Center and a new wing for the Dumbarton Oaks museum in Washington, D.C.). Just minutes before arriving for the opening, Johnson had chewed out the local contractor who was riding with him for the rippling way in which the concrete had settled (a tongue-lashing the builder told me he'll never forget).
But the modernist building became a part of the Church Hill landscape and, aside from a number of Christmases when an electrified star shone from its tower, Richmonders took to this elegant, if unlikely, landmark.
But WRVA, like many corporations, come and go. Some of Richmond's best buildings include the former Reynolds Metals headquarters on West Broad Street, designed by Skidmore Owings & Merrill in 1957, and the Best Products Co. Inc. building (designed by Hardy Holzman Pfeiffer and Marcellus Wright Cox & Smith in 1981). [Full disclosure: Best is a former employer of this writer.] They are structures designed by name-brand architects but now occupied by new tenants. When WRVA changed hands a number of years ago, the Philip Johnson building was put up for sale, its future unsure.
The knight that rescued the shining temple on the hill was ChildSavers, a child services agency (until recently known as the Memorial Child Guidance Clinic) that for many years had operated just three blocks away at 2317-19 E. Broad St.
Under the sensitive guidance of Baskervill, a Richmond architecture firm, the 18,000-square-foot building, including a full lower level in addition to the main floor, has been reworked to create colorful and welcoming counseling rooms, training spaces and staff offices where radio studios were once located.
Philip Johnson's spaces are so generous and his detailing so assuredly clean, Baskervill didn't have much to undo. Many of the spaces are glorious -- the sweeping entrance foyer that extends from the front door on 22nd Street clear to the rear is one of Richmond's most exhilarating interior spaces.
While this corridor and the entire landmark have been treated with utmost respect, Baskervill has dropped ceilings in places, added workstations and introduced a palette of embracing colors intended to make the space more child-friendly (although I suspect no one has ever polled children on whether they prefer lively sherbet tones or shades of monochromic, modernistic Bauhaus, a movement of which Johnson was a devotee). Baskervill's graphics, colors and furnishings are lively without being giddy.
On the windowless lower level, the architects were able to make their most important imprint by creating a series of spaces that open one unto another and are enlivened by indirect washes of light.
Our most distinctive 20th-century landmarks are by no means secure. Recently, the elegant Eighth Street office building was demolished and on the Virginia Commonwealth University medical campus, part of the Larrick Student Center (formerly the Civil War Centennial Center) was removed. ChildSavers should be applauded for not only saving one of our region's iconic buildings, but also reworking it to serve some of the poorest and neediest children in our community. The same passion ChildSavers gives in delivering social services was obviously extended to this $5.4 million project: We owe them a huge shout-out for multiple reasons.ÿ