A Lens On Suffering

The iconic photographs of Dorothea Lange take the spotlight at the University of Richmond. 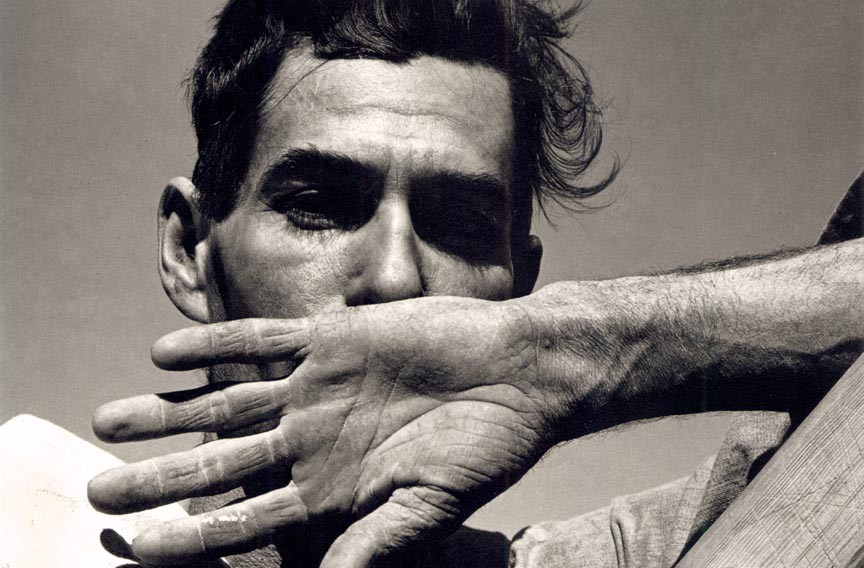 In an era of ubiquitous cell-phone photography, it's strange to recall that the U.S. government hired photographers to document tough economic times. From 1936 to 1943, the Farm Security Administration's information division did just that, paying more than 20 photographers to document the hardships of the American people during the Great Depression. The resulting 250,000 negatives taken across the country were used to show Congress that social reform and financial aid were needed desperately.

"The Social Lens: Photographs by Dorothea Lange and Her Contemporaries," at the University of Richmond's Harnett Museum of Art, displays social documentary photography of the administration group and other photographers. The common thread throughout is a focus on work, both its presence and its absence.

Central to the exhibition is the iconic "Migrant Mother, Nipomo, California" from 1936, showing a destitute woman with three of her seven children, stranded in a migrant camp. The mother is only 32, according to Lange's notes. Although Lange took six photos that day, this one became the emblem of the Great Depression.

"Before Lange worked for the FSA, she was a portrait photographer," says Elizabeth Schlatter, deputy director and curator of exhibitions at the University of Richmond museums. "You can see it in her work. She always said what she and her colleagues were trying to do was capture the essence of a subject. She didn't try to sensationalize poverty. There was a kind of intimacy in her work due to her being a woman, but also due to her style."

Despite its title, the show includes Lange works from the postwar years as well. After the project ended, she began to work independently, documenting religious groups such as the Mormons and the relocation of Japanese-Americans. During the 1950s, she photographed industrial shifts in California, taking assignments from Life and other magazines. The exhibit includes work from as late as 1964, the year before she died.

Also on view are other well-known social documentary photographers of the time, such as Walker Evans, Ben Shahn and Lewis Hine, and even a few other women, including Marion Post Wolcott and Doris Ulmann. Given the time, it's hardly surprising that while Evans was paid $3,000 a year by the government, Lange made only $2,300, although that was still more than twice the average worker's salary during the Depression. It was a decent salary to document those who had little or none.

"It was the job of a lifetime for her and many of the photographers," Schlatter says. "They felt they had a real purpose for what they were doing." S

"The Social Lens: Photographs by Dorothea Lange and Her Contemporaries" opens at UR's Harnett Museum of Art on Aug. 22 and runs through Oct. 7. The museum holds a lecture Wednesday, Sept. 5, at 7 p.m. in Camp Concert Hall, by Beverly Brannan, curator of photography at the Library of Congress, on "Women of the FSA: Working in the South 1935-1943." A reception and viewing follows at 8 p.m. For information, call 289-8276 or go to museums.richmond.edu.