Todd Field's "Tár" is about an intersection of art, caste, personal myth, and morality. 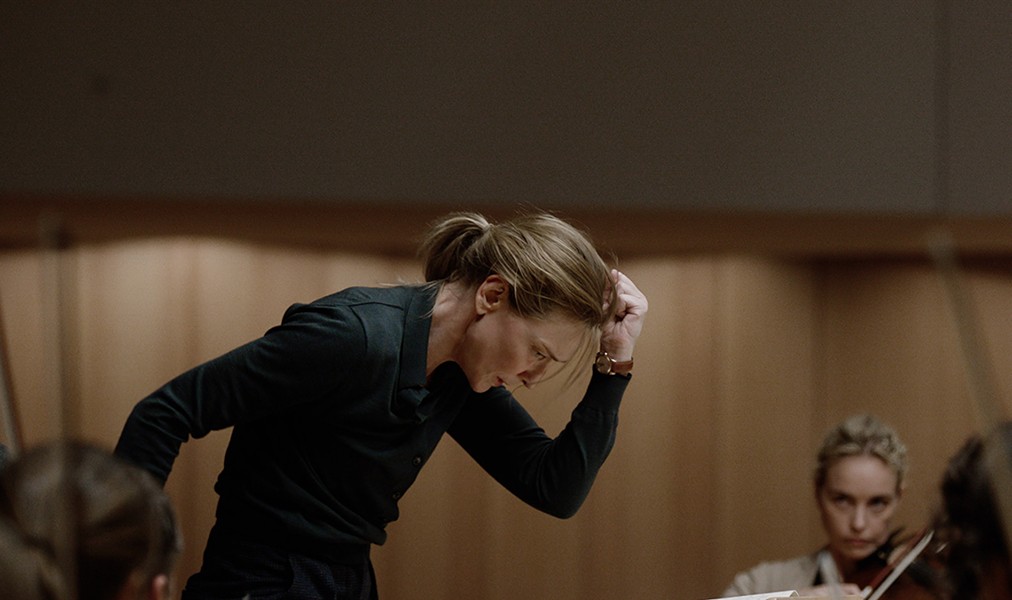 Cate Blanchett plays conductor Lydia Tár in the latest film by director Todd Field ("In The Bedroom" and "Little Children").

Todd Field’s “Tár” dips a toe into cancel culture, following a conductor in the mold of James Levine whose career is quashed by allegations of sexual misconduct. Outside of those who must have their politics confirmed to them at every turn, however, “Tár” will probably be less divisive for its subject matter than its approach. It is not a scalding social melodrama in the mold of an Elia Kazan or a Douglas Sirk or a Spike Lee, and it does not have the fire and brimstone of Field’s exemplary “In the Bedroom.” Instead, “Tár” is elliptical and stifling. This effect is intentional. In between many vague procedural scenes, a highly charged and loaded moment will float down the river. You are meant to gather these moments and unite them in your mind, gleaning a point from the haze.

For “Tár” to work, you have to accept that its sense of tunnel-vision reflects a singular state of mind, that of conductor Lydia Tár (Cate Blanchett), and the rendering of that reflection must excuse for you the fact that no other character matters. Great pain—the pain wrought from Tár’s grooming of young women, her betrayals of her wife, Sharon (Nina Hoss), her marginalizing of her assistant-slash-potential protégé, Francesca (Noêmie Merlant), and her sleights of various hangers-on—is acutely acknowledged by Field, even if he reduces these characters to witnesses for the prosecution. They are variables in an elaborate proof, a proof that Tár’s carefully-cultivated image has run away with her, eclipsing what she pretends is her focus: classical music. Field rhymes her image with an image that Tár despises: that of the politically correct brigade that evaluates art by moral character. Both are superficial, both position themselves above art. Field follows Tár as this realization dawns her in the midst of great chaos, shattering her sense of self.

Yet I’m making “Tár” sound more straightforward than it actually is. You have to work for these realizations, the way Tár has to work to push her vision of Mahler’s Fifth to the forefront of the group consciousness of the Berlin Philharmonic, which she’s conducting. Field intentionally traps us in a self-absorbed, essentially bored state of mind, the elisions and reductions reflecting selfishness. Francesca and Sharon and others are ciphers, whose psychological states are virtually unconsidered by Field despite their importance to the plot, because Tár herself doesn’t see them beyond functional capacities. Nina evens says to Tár at one point that every relationship in the conductor’s life is transactional, save for her relationship with their young daughter, Petra (Mila Bogojevic).

Field’s movie is virtually perfect on its terms, it’s a matter of whether you accept them. I did not, not entirely.

I do not accept that a movie’s empathetic purview must be limited in order to reflect the shortsightedness of a protagonist. At least not here. Take Martin Scorsese’s great, highly neurotic “Taxi Driver.” We are in Robert De Niro’s troubled consciousness for the entire film, yet we’re seeing how the world outside of him works. Scorsese offers a double consciousness: of De Niro’s mind and of everything else. In “Tár,” Field uses his narrow concept as a get-out-of-jail free card, an excuse not to dramatize scenes that might shake up his carefully cultivated aura, his fashionable vibe of aloof, elite vagueness. This is an art-film trick: flatten everything out to condition the audience to celebrate your film for its dramatic shortcomings. This trick certainly worked more than once for Stanley Kubrick, who directed Field in “Eyes Wide Shut.”

The first 20 minutes of “Tár” are a practical dare of the audience not to reject Field’s highhandedness. The film opens with what are traditionally end credits, with those technical citations that no one reads. Given Field’s ostensible, mostly only theoretical concern with underlings who’re crushed by the privileged, this gambit is poignant, if precious. Then we’re with Tár as she’s interviewed by New Yorker writer Adam Gopnik, who recites her accomplishments over a period of what felt to me like a half hour. She’s done it all. Tár has conducted every philharmonic you’ve ever heard of, brought music to indigenous people, become an EGOT winner, and started a program for mentoring female composers. Currently, she’s hawking a book, “Tár on Tár.”

Field probably knows the beginning of this film is a bit much, from the end credits first to the Gopnik cameo to a long scene that suggests an oration of a Wikipedia article. In case we miss the self-awareness, Field cuts to a close-up of Francesca mouthing Tár’s accomplishments in sync with Gopnik. We’re meant to understand that this ceremony is canned and self-important. But parody of self-importance and self-importance straight with no chaser are impossible to differentiate here, as Field gets off on the motherlode of elite detail in which his script revels.

Parts of “Tár” are the nervy Molotov cocktail that we want it to be. While lecturing to her students at Julliard, Tár references a piece by Bach, whose work a BIPOC pangender student, Max (Zethphan Smith-Gneist), rejects on the grounds that he was white, straight, and screwed around. Critics have taken issue with this scene, suggesting that Tár, and by extension Field, is attacking identity politics that don’t exist. They must not read Twitter, which makes sport of evaluating art and people via representational demographics and Monday-morning-quarterback moralism, or have bothered to discern that Field understands Tár’s persona to be itself a form of identity politics. Tár humiliates Max, taking his argument apart, establishing what to some of us is obvious: That reducing people or art to stats and optics is the very thing these students think they’re combatting—discrimination. Such reductions are usually smug, simplistic, and boring.

Field frames this scene in a long, coiling take, allowing you to feel the gathering ferocity of Tár’s thoughts as she circles Max. This is a case of a long take serving an actual purpose, linking the flow of Tár’s intellect and spite with the creative energy she expends towards conducting. Whether it’s right or wrong, I wanted to buy Tár a drink afterwards, but Field allows other reverberations to enter the fold. The pain of the student is acknowledged. Max’s leg twitches, he’s on the verge of tears, and if we think back on it his confession of resisting Bach was nervously and politely broached. Come to think of it further, there was a less humiliating way for Tár to make her point, which might’ve even opened Max up to Bach. Yet Tár chose to gratify her rage and ego. Twitter combat finds its way even into the vaunted halls of Julliard.

Tár is a gay woman working in a man’s field, a “U-Haul lesbian” who clearly feels this fact absolves her of having to take part in the acts of contrition that are expected of straight white men in the age of #MeToo and Donald Trump. Which is to say that she resents the very identity politics that might protect her, for a stretch, from having to indulge them herself. That’s a resonant idea for a character in the 21st century, and it’s another get-out-of-jail-free card for Field too. As Tár is accused of grooming female musicians for sex in the wake of a spurned lover’s suicide, men in the audience, Field among them, may be allowed to breathe a little easier. “Thank God it’s a woman this time.” Put Daniel Day-Lewis in this role and scenes play differently, especially that moment with Max.

Levine, who was fired from the Metropolitan Opera in 2018 in the wake of sexual misconduct allegations, is mentioned by an old colleague of Tár’s with sympathy. The old man, a giant of classical music, a mentor of Tár’s, likens the purge of accused sexual predators—proven and otherwise—from culture to the paranoia following the collapse of the Nazi regime. The Nazi association is made more pointed by the film’s primary setting, Berlin, as Tár, lest we’ve forgotten, leads the Berlin Philharmonic. Any movie that features such a comparison, regardless of the context, is looking for an argument. But Field is too concerned with playing arthouse games to mount a compelling morality play.

The confrontation with Max is exhilarating for diving right into conflict, for allowing characters to voice thoughts directly. The air is allowed to clear, and for a moment the film crackles. Another scene, very late in the game, has a similar effect: When Tár is told to select a masseuse from an obvious sex parlor and suddenly realizes that she had reduced the halls of her various prestigious positions to whorehouses. She is a metaphorical as well as a literal fraud, though Field sympathizes with her. Who should cast the first stone? You? Me? A BIPOC pangender Twitter warrior? We might not all be sitting across from Gopnik, but what illusions encage us? People who call the film a reactionary defense of sexual predators seem to have missed these scenes. Admittedly, it’s easier than it should be to miss them, as so many scenes are so emotionally freeze-dried that a moment of feeling comes as a shock.

A celloist, Olga (Sophie Kauer), is a driving element of the film’s second half, a primary agent of Tár’s comeuppance, and we have no idea how she feels about the attention Tár showers her with. This is Field’s shortsightedness, rather than Tár’s. It is suggested that Francesca was once Tár’s lover but nothing concrete is established, and we’re rarely invited to share whatever guilt or exaltation she may feel for enabling her maestro’s abuses of power. For a movie driven at its core by sex, there is none, and there are few personal aftereffects. Only shifts in power are considered.

Field is too enthralled with the sociopolitical dimensions of Tár’s rarefied biosphere to establish rudimentary human relationships. Little intimacy exists in this movie, not between Tár and Sharon, the orchestra’s concertmaster, or between Tár and the young women in her orbit. Field even shortchanges Tár’s relationship to her music. For this film to get in our bones and rattle us, we need to see how Tár’s demons are inseparable from her talent. We must be forced to reckon with how her abuses are bonded to her transcendent music and vice versa. Field doesn’t seem to believe that such a link matters to a movie that is about an intersection of art, caste, personal myth, and morality.

Sharon leaves Tár, taking Petra. What is said? What is felt? Field shoots the departure from a distance and reduces the sequence to a few seconds. When Francesca is betrayed, she disappears from the movie, her reactions omitted, undramatized. Even the scene where Tár loses her position somehow, astonishingly, does not exist. So many abbreviations, yet this thing still runs a loose and masochistic 160 minutes. Field may think he’s transcending plot for mood, but his refusal to follow through on few of the implications of his story ironically makes the film feel plottier. “Tár” becomes a knotted symphony of “and then this happened.” The audience may feel like a court stenographer.