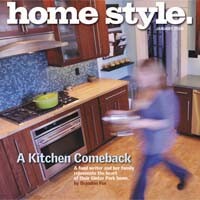 I felt lightheaded when my husband said he thought, upon reflection, that we might be able to shoehorn a Wolf cooktop and oven into our kitchen renovation budget. Some women get diamonds, and others (the luckier ones) find husbands who understand the greater value of a high-end appliance.

When we first moved into our Ginter Park house 10 years ago, nothing had been updated, except for the furnace. Remarkable, really, for a house built in 1916. The power ran on the original wiring, the floors had never been refinished and the lack of outlets meant we had extension cords wrapping every room.

The kitchen was a history lesson in interior design. There were no fixtures at all; once the two sisters who'd been born and lived their entire lives in our house were gone, the free-standing cupboards and tables they'd used went with them, and all that was left was a Magic Chef stove from the '60s, the water heater in the corner and a sink.

With pressing matters like electricity, insulation and plumbing to deal with, we didn't have a lot of money left for luxuries like cabinets, so for $100, we bought a set of metal cabinets, a chest of drawers and a Formica-topped table at a mid-century antiques store. They fit in seamlessly. We painted and added a short counter, and we stuck new flooring tiles on top of the ancient linoleum. Finally, we had the water heater moved to the basement, where it should have been in the first place. Voila! We'd just updated our kitchen to 1965.

Throughout the years, the knickknacks and children's projects accumulated on the shelves, and my passion for small appliances became unwise for someone with so little storage. The stove was temperamental and even an oven thermometer failed to compensate for all of the cold and hot spots inside the oven too numerous to map. Charming as it appeared on the outside, the Magic Chef had to go.

At first I just wanted to update the kitchen's infrastructure while preserving the vintage feel of its look. Then I stopped by a European kitchen design store and fell for all of its clean lines and smooth wood and brushed steel and, and, and . . . you could pull the drawers in and out smoothly, and when you opened a cabinet door, it actually opened instead of sticking shut. Everything was so very, very clean. There weren't any cracks or crevices to catch dirt or dust; there was no rust and no ancient grease buildup.

I recently asked architect Da.na Moore what you should think about first when contemplating a new kitchen. Her advice was to critically assess the place the kitchen has in your household. "What do you do in your family?" she asks clients. "Is the kitchen the center of your home? Is it the room your life revolves around, or is it some place you go to open a can and dump it in the microwave?"

That was an easy question for me to answer. When you write and think and read about food as much as I do, a kitchen becomes the equivalent of a workshop or a studio. I wanted a grown-up kitchen instead of the ad hoc, post-adolescent (think of your college kitchen and add babies to it) place that had sprung up around me. I spend more hours than I like to count there every day of my life, and I wanted the new space to be a real kitchen, like you see in magazines, instead of the shabby velveteen rabbit of a room it actually was. My husband, after all, was now a building contractor with his own company, Arias Remodel and Design, and it seemed like he was redoing everyone's kitchen in Richmond except for mine.

Oh, and once a family of mice moved in under my stove, the time had come to rip it all out.

My husband sketched out his design, and a plastic sheet went up between the kitchen and the rest of the house. Suddenly, my somewhat easygoing household was transformed into a highly charged campsite. Our refrigerator, sensing its own demise, decided to go ahead and give up the ghost on its own. So off we went to Home Depot to buy our first major appliance, a stainless LG French-door refrigerator. Although I'd brought stacks of recommendations printed out from the Consumer Reports Web site with me, we bought our refrigerator for the worst reason possible: It was the only French-door model that dispensed ice and water from the door. Still, my husband pointed out, it was on sale.

It went into the dining room, and with the microwave and the electric panini maker -- the most useful appliance I ever considered the most useless at first -- we were able to cook … a little. It's amazing how much more exciting a sandwich seems when flattened, and when served with bacon, potatoes and vegetables, I was actually able to coax some real meals out of it. They were a welcome change from the monotonous cycle of pizza, Chinese, Vietnamese, Ukrop's chicken and back again to pizza.

About a month into the project, after I'd done all of the fun stuff, like picking out the appliances and cabinets, we got down to the nitty-gritty. What kind of flooring did we want? Where were the lights going to go? How could we fit a wine rack into a room with walls that were completely taken up with cupboards? Why were all of the ceiling fans at Lowe's so ugly?

As Moore warns, "When you're in the mix of it all, it's hard to keep perspective on what's most critical and what's only moderately important." Sometimes, she says, the classic work triangle recommended by kitchen designers just won't work in your space.

My husband put it more bluntly: "I'm not tearing out any more walls." He'd already bumped out a side porch to make an eating area and removed the doorway to the pantry to open up more space, but even then, we couldn't get the refrigerator in the right place to make that triangle work. He moved the sink to a corner, creating more counter space, but no matter how hard we tried, if we put in an island, it would block the path to the stove. We finally were forced to decide that none of these things were all that important.

So -- heretically -- we jettisoned the island and left the space open for children to play and for dogs to lounge. The cork flooring we chose not only protects our dishes from breakage (mostly), but also hides the dirt. The wine rack found a home over the refrigerator, and although we never did agree on the trim my husband installed without consulting me, now I don't even notice it. Instead, the fabulous concrete counter my husband hand-poured and the extravagant Wolf range I mentioned earlier wage a daily seduction over me that makes me forget how long and fraught with tension the decision-making process was. Although I never want to go through the process of redoing my kitchen again, I don't know how I managed to survive before I did.