A History of Rebellion

Online talk digs into the role of Black women in Nat Turner’s community. 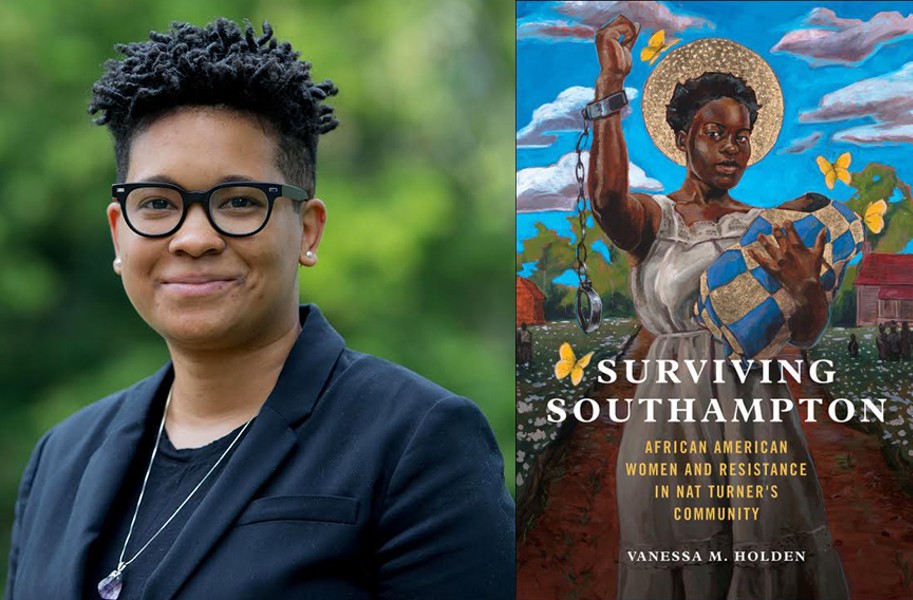 At Randolph-Macon Woman’s College, now Randolph College, Vanessa Holden took her first women’s history course. That was when she learned about the important role that Black women played in enslaved communities.

Studying the ways that enslaved women sustained communities and kinship networks, not to mention surviving violent enslavers and arduous labor, Holden became curious about how they’d contributed to resistance.

“Most books I'd read about slave rebellion highlighted one male leader or men’s actions,” she explains. “Women, I knew, couldn’t have been left out of these community events, so my research question became how and where could I find them?”

The result is “Surviving Southampton: African American Women and Resistance in Nat Turner’s Community,” which reimagines the iconic event and will be the focus of an online talk June 10 sponsored by the Library of Virginia.

Holden’s research yielded various practices that sustained resistance and survival among enslaved people from the earliest moments of the trans-Atlantic slave trade. Enslaved people went truant, fleeing enslavers for free states or Canada and helped fugitives from slavery on their journeys. They hid out in the Great Dismal Swamp and created maroon communities, in which descendants of Africans in the Americas formed settlements away from slavery, often mixing with indigenous people. They broke tools to slow work, stole food to sustain themselves and found creative ways to steal time and labor from enslavers.

“In Southampton County, as with all sites of enslavement, enslaved people thwarted local slave patrols in order to hold funerals, worship without white onlookers and host illicit gatherings,” Holden says, pointing out that everyday resistance helped facilitate open rebellion. “After all, the Southampton Rebellion began with a barbecue made with a stolen pig and stolen brandy from a local enslaver’s still.”

The book makes clear how Black women and communities made sure to raise children who learned the history of rebellion so they could use it going forward. Nat Turner became both a folk hero and a warning. African Americans were proud to have resisted slavery, Holden found, but were savvy to the violence and real power that white enslavers wielded. “They showed their children how to resist and how to survive,” Holden says. “Often, the practices were one and the same.”

Motivating the author as she researched was a desire to get closer to answering an early question she had: Who fed Nat Turner? Turner went missing after the rebellion and remained at large for months afterward. Rumors circulated about his whereabouts, while he was actually in a dugout cave very close to where he began the uprising.

“But how did he eat? Who fed him? I don’t know the specific answer to that question, but the broad answer is: the Black community of Southampton County,” she explains, citing how enslaved people and free people of color had long supported outliers, fugitives and those who’d gone into the Great Dismal Swamp to live. “The community was the key to Turner’s survival and it was part of enslaved women’s key contributions to the rebellion.”

As she researched, Holden constantly found herself challenged with new facets of the community she hadn’t considered, such as free children of color in the antebellum period. Not only were they very much present in Southampton County, she found they were also often bound out as laborers to white landowners in indenturelike contracts that lasted until young adulthood. The result was that free children of color often lived among enslaved people on white-owned farms. Holden says she can see how free Black parents with few employment options were being targeted by local ministers of the poor, but in the rebellions wake, some free parents voluntarily their children in indenture. They did this to keep them in the county, to keep their families together and to fend off white Virginia’s efforts at expulsion.

“The system remained exploitative and a means of policing free people,” she says. “But in this one instance, free parents of color used the system in a way that must have been both heartbreaking and significant.”

Beginning her research with Black women made new facets of the broader community come into clearer view and that view became her book. Acknowledging that no story is ever complete and no history without lingering questions, Holden sees the important role that Black women – free and enslaved – played in sustaining their community and fighting against slavery as empowering and inspiring, albeit also full of grief, violence and sorrow.

“Women survived and had to piece together a shattered community that would continue to live in the shadow of the rebellion,” she says. “The ‘after’ of the story is very important because the effort to survive was just as heroic as the effort to resist and rebel.”