The responsibility of Richmond’s Jews during the current protests. 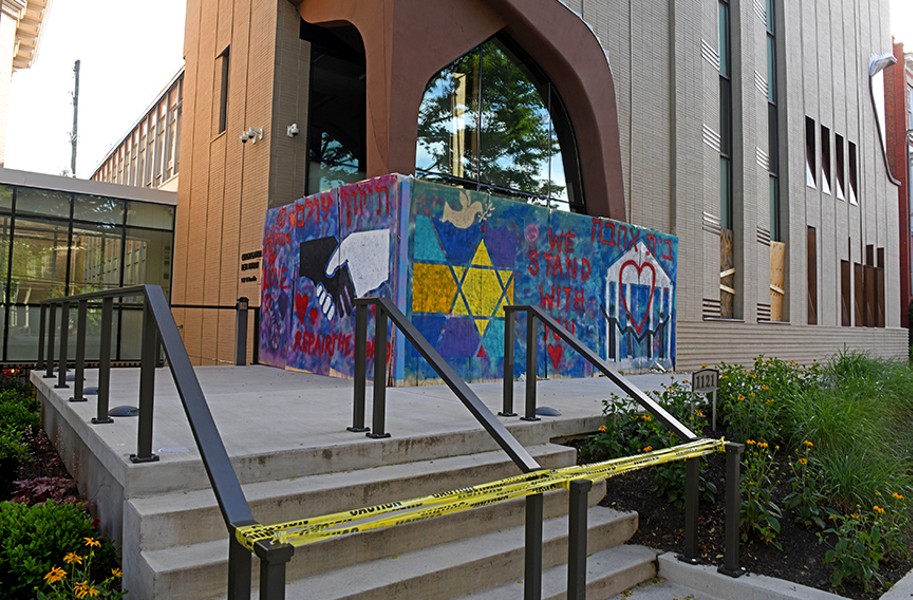 Scott Elmquist During protests from the last weekend of May, a brick was thrown through a window of Congregation Beth Ahabah at 1121 W. Franklin St., one of the oldest synagogues in the United States.

During the first weekend of demonstrations, Richmonders joined in the nationwide protests over police brutality towards African Americans, launched in response to the killing of George Floyd, an unarmed black man, by a white Minneapolis police officer. The mostly peaceful protests during the day sometimes bled into more violent activity at night. Late Saturday night on May 30, a protester threw a brick through a window of Beth Ahabah, Richmond’s oldest synagogue.

Footage of the incident shows that the culprit was immediately chastised by nearby protesters. It’s possible the brick thrower did not even know he was damaging a synagogue. Still, we are saddened by the damage caused to Beth Ahabah. Vandalizing a synagogue is inexcusable, and we stand with our friends and colleagues there during this trying time. Yet we can also see this disturbing incident as an opportunity: Perhaps the shattered glass can serve as a wake-up call to a Richmond Jewish community that has a troubling history when it comes to racial injustice. Richmond’s Jews can no longer be silent: Now is the time for us to march and to work with African Americans and other people of conscience to dismantle systemic racism and end racial inequality.

When African American-Jewish relations are discussed, conversation often veers towards the image of the Rev. Martin Luther King Jr. and Rabbi Abraham Joshua Heschel marching together towards Selma in pursuit of voting rights for African Americans. But the story, in the South and especially in Richmond, is more complicated. In the antebellum period, most Jewish families in Richmond owned enslaved people. Judah P. Benjamin, the Jewish secretary of state of the Confederacy, defended slavery from his perch in the Confederate capital. So too did Rabbi Maximillian Michelbacher from his pulpit at Beth Ahabah, thanking God for “the man-servants and the maid-servants Thou hast given unto us.”

After the Civil War, Richmond Jews of European descent continued to benefit from white privilege in the Jim Crow South, consuming and sometimes disseminating the racist messaging all around them. In 1892, Beth Ahabah Rabbi Edward Calisch was a highly respected Richmond resident, a modernizer and leader of interfaith efforts, yet he too argued that the typical black American “betrays only too clearly his savage ancestors and present brothers in the African wild.” Similarly, Herbert Ezekiel, Richmond journalist and editor of the weekly newspaper The Jewish South, dismissed any notion of commonality between blacks and Jews, writing in 1898: “The Jew, as a rule, is a good citizen, the Negro a bad, or at best an indifferent one.”

Richmond Jewry also played a role in celebrating the Lost Cause, a movement to glorify the Confederacy and downplay the evils of slavery and its central significance to the Civil War. Jews honored the Lost Cause at Richmond’s Hebrew Cemetery, which contains a Confederate section, and at elaborate ceremonies and pageants during the 1954 American Jewish Tercentenary and the 1961-1965 Civil War Centennial. In 1942, the founders of our synagogue, Temple Beth-El, mostly eastern European Jews and their descendants, laid the cornerstone with a prayer book that belonged to a (non-Jewish) Confederate colonel. Participating in the cult of the Lost Cause helped Richmond Jews fit in to white Christian society, an opportunity denied to African Americans.

With the rise of the modern Civil Rights Movement, most Jews in the South fell silent on the question of segregation. In his famous “Letter from a Birmingham Jail,” King chastised Southern “white moderates” for their timidity in fighting injustice. Most Richmond Jews were these white moderates. While some privately opposed discrimination, few were willing to challenge the status quo.

For example, in the mid-1950s a young scholar named Esor Ben-Sorek taught at Temple Beth-El. One Sabbath, Ben-Sorek gave a sermon on the evils of segregation. After the service, he was reprimanded by the synagogue’s president and instructed never again to discuss race relations. In 1958, when antisemitic Richmond journalist William J. Kilpatrick wrote an editorial warning local Jews not to side with the Civil Rights Movement, prominent Jewish business leaders met with him to insist that they opposed integration. Two years later, African American activists from Virginia Union University, known as the Richmond 34, held a sit-in at Thalhimers, Richmond’s most prominent and Jewish-owned department store, which still enforced segregation.

Jewish Richmonders must now be the ones sitting in, peacefully protesting police brutality and the rampant racial inequities in our society. Jewish tradition teaches that every human being is created in God’s image, all equal in value and infinite in dignity. Jews are commanded to pursue a society in which “there are no needy” (Deuteronomy 15:4) and where “one law” is applied equally to all people (Exodus 12:49). As heirs to a tradition that abhors racism and demands equity, Jews are duty-bound to protest the racial injustice all too prevalent in our country.

Additionally, Jews and people of color share a common enemy. The racism, anti-Semitism, white supremacy and white nationalism reaching from dark corners of the internet all the way to the White House threaten us all. As King wrote in 1963, “We are caught in an inescapable network of mutuality, tied in a single garment of destiny.” Our fates are intertwined. None of us can truly flourish until anti-Semitism is eradicated and racism is uprooted from our hearts, our laws and our systems.

We are proud of the fact that, today, Richmond-area rabbis and congregations, many of which proudly count Jews of color as members, collaborate regularly with our black brothers and sisters of many faiths. Perhaps this is a partial atonement for our community’s past sins. But our communal repentance remains incomplete. Too often, we see Jewish Richmonders remaining on the sidelines of the fight for racial justice, silent as we have ever been. Being mindful of our history and our values, Jews – particularly Richmond’s Jews – should proclaim Black Lives Matter and join wholeheartedly in the urgent struggle to achieve the shared dream of King and Heschel.

Rabbi Michael Knopf is the spiritual leader of Temple Beth-El in Richmond and the author of “Thirty Days of Liberation.” David Weinfeld is a professor of Judaic studies at Virginia Commonwealth University and a member of Temple Beth-El.