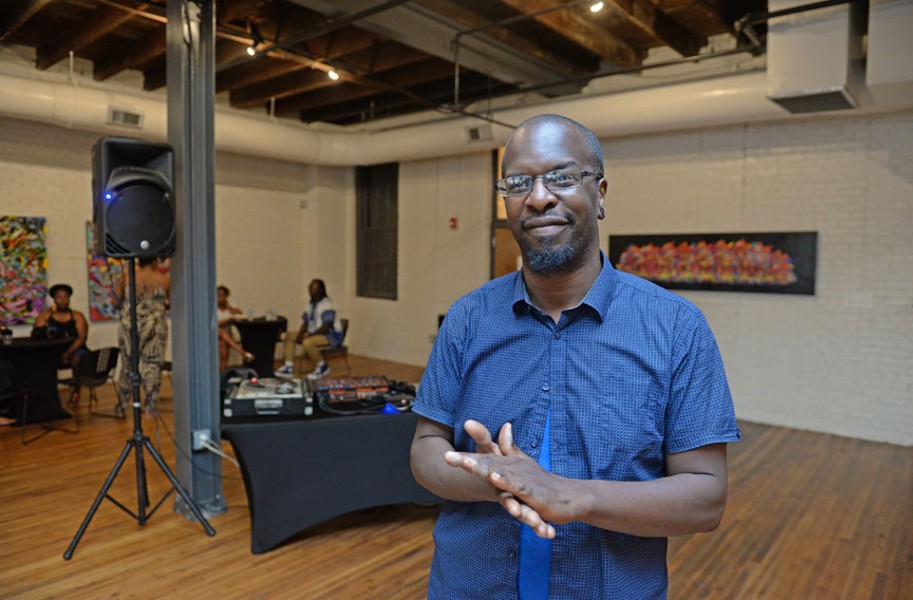 Scott Elmquist DJ Michael “Mikemetic” Williams says that music is the driving force in everything he does, that includes his new book of haiku, “Hood Haiku: Volume One: Sidewalk Science.”

Part Public Enemy and part Zora Neale Hurston, Michael Williams’ haiku are an amalgamation of his other art forms.

Living on Leigh Street in Jackson Ward, Williams found himself both inspired by the neighborhood’s former glory and unsettled by its contemporary metamorphosis. Writing about it provided an outlet for his observations, but eventually left him frustrated because he wasn’t finishing what he started.

In 2009, he turned to the traditional Japanese haiku, a 17-syllable structure done in three lines of five, seven and five syllables, as a way to not only to find joy in his writing but also feel the gratification of completion. The resulting book, “Hood Haiku,” published by Richmond’s Fist City Press, collects seven named chapters of that poetry.

“I had a lot of stuff to say, but I wanted strict parameters,” Williams says of working in the disciplined format. He saw writing as a way to put down on paper things that were going through his head. “Doing that helps you get a better idea of yourself and I liked that you had to make something happen within a certain amount of syllables,” he says.

Williams, who calls himself a child of the ’70s, grew up listening to funk and soul, putting him at the front end of hip-hop. The son of an English teacher, he also was musically inclined, starting piano at 5, learning cello and sax in elementary school and taking guitar lessons at his private middle school.

The latter school, predominantly white, exposed him to the Grateful Dead, REM and U2 during a period when he was living in an all-black neighborhood. For him, it felt like a constant shifting between two worlds.

“Music is the driving force in everything I do. My foundation is in hip-hop culture and language,” he says. “When I started writing haikus, I wanted to be true to that.”

Because of her authentic use of language, poet Hurston was a role model for him, as were black Southerners, whom he characterizes as “not dressing up language.” He began posting his haiku to a Facebook page, but in 2011 put up a farewell message, stopped writing and began painting when he had time.

But the poetry gods weren’t done with him yet. Two summers ago, he was connected with Kevin Kosanovich (a Style contributor), who in 2012 had started the William and Mary Hip Hop Collection to document and preserve the history of hip-hop culture in Virginia, using oral history, music, material records, documents and other ephemera related to the culture.

Williams met with Kosanovich thinking they’d discuss his two decades of deep connections to the local music and DJ scenes. Only after he mentioned his haiku writing did he learn that Kosanovich had a publishing company called Fist City. It’s devoted to anything that investigates, explores or illumines the urban experience, the editor-in-chief says. Kosanovich was interested in seeing Williams’s manuscript.

Sounds in the distance:
Small caliber firearms:
Crickets of the hood

Kosanovich was immediately taken with what he read, noting that haiku and hip-hop culture share the same impetus in affecting, creating and maintaining culture. It was his idea to bring on Ty Carey as illustrator.

“Hip-hop has always been about making connections through the use and reuse of cultural texts,” he says. “Mike’s exploration of African-American community and themes through haiku are literary and cultural acts of bricolage. I see this book as an extension of his work — visual, written and music — as an artist.”

“Hood Haiku, Volume One: Sidewalk Science” was the result and is available for order online. It won’t be the last, because Williams already has written poems enough for three or four more volumes, all of which will be more completely illustrated by Carey.

“I don’t believe in muses,” Williams says. “When I sit down to write, I have enough on file in my mind that I just have to decide what angle I want to take. I have a phrase, an idea and I have to cut it back to figure out how to finish it off. It’s more like a word game and I’ve always been good at those.” S

Books may be ordered at fistcitypress.com.