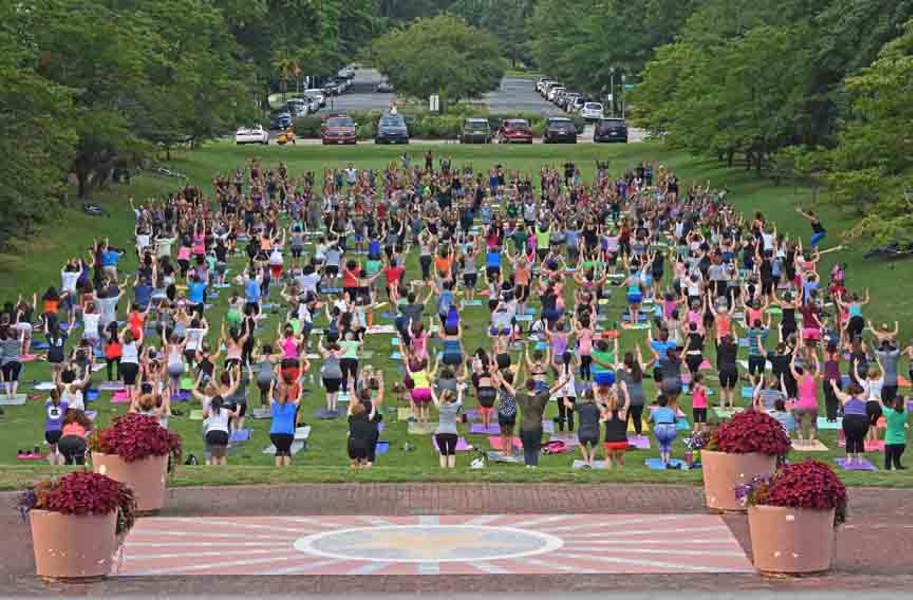 King of Pops’ popular free yoga event is moving out of William Byrd Park after city officials said a special use permit would be necessary.

Launched in 2016 with instructor Michelle Landon, the Tuesday evening gathering has grown to more than 300 participants, a number which triggers calls for a permit. But the Parks, Recreation and Community Facilities Department says it also reached out because products were being sold on park property and the event was publicly advertised. Additionally, complaints were made to the Carillon Civic Association and council member Parker Agelasto’s office regarding increased traffic and parked cars.

This is the latest neighborhood to face debate over the use of nearby public space, parking and maintenance. In May, a newly named president for Scuffletown Park stepped down after attempting to enforce new rules supported by neighbors weary of more visitors. Last week a parking permit decision was delayed in Oregon Hill, where some residents argue the neighborhood has turned into a parking lot for visitors to the James River Park System. To many in these debates, the appeal is seeing their voice result in decisive action, especially in an era when long-standing issues remain.

King of Pops owner Paul Cassimus says he feels no ill will, and thinks the event has outgrown the space near the Carillion anyway. On Aug. 7, Free Yoga in the Park will begin stretching out at Maymont.

“To me it came down to the advertising criteria, and to I didn’t want to make the event hush-hush just to keep using a free space,” Cassimus says of his discussion with officials. The city was requesting about $800 a week to stay, he adds. “We’re not trying to take advantage of the city. If that’s a rule, that’s a rule. I get it. However, if the fee was lower, I would’ve paid that and gone out of pocket for it, so we could continue to advertise.”

Before a new space had been secured, passionate responses landed on Landon’s and King of Pops’ Facebook pages, which were the advertising channels in question. Several wanted to know how they could help.

“I was hoping Natural Awakenings could help out, but the amount being charged really is cost prohibitive,” says Jessica Coffey, publisher of the magazine. “I love how it is so community-focused and Michelle does an excellent job of connecting with such a big group of yogis at varying levels. King of Pops makes it fun, too. They add a festive element to the event.”

As word spread, Landon says she found out that the executive director of Maymont was attending the event and loved it. So moving forward, the yoga will be moving to the grounds of Maymont.

“Now If I want to have [amplified] sound, I can have sound now," Landon says. "That was always an issue.”

Complaints arriving in Agelasto’s office focused on traffic patterns before and after the event, pedestrian safety and parking patterns, says his liaison, Amy Robins. Wear and tear on park grounds was also a concern. Both Landon and Cassimus says there was never any need for a trash crew to clean up after the event.

Cassimus is still scratching his head, though, over what products might’ve been sold on parks property. He’s always paid Landon an upfront fee for teaching, but for two years he gave away free popsicles -- almost 12,000 of them. This year he decided to monetize his popsicles by moving to a sidewalk near the parking lot, since he has a sidewalk vendor permit. He believed the strip was outside park boundaries.

“Someone reached out from the Carillon Civic Association maybe last year and they were very nice,” Cassimus says. “They said, ‘Just remind your people to park legally.’ And we did that and since then, I’ve heard nothing.”

King of Pops has donated a quarter of profits from after-yoga sales this year to nonprofits, including the Carillon Civic Association.

“At the end of the day, even with the sales, we’re not making any money on it and we never have,” Cassimus says.

“As a Carillon resident, I was hoping there was a way the neighborhood or Carillon Civic Association could support or sponsor the event,” Coffey says. “But I do not know if that is even an option, as I do not know enough about the oversight of the space.”

Landon and Cassimus say they have their sights on the future now.

“In the end, it’s worked out, it’ll be fine and we’ll still have yoga and it’ll be a better situation,” Landon says.

Correction: A quote from a subject in the story previously indicated Maymont was not owned by the city, it in fact is. It is operated by the nonprofit Maymont Foundation in a unique partnership with the city.