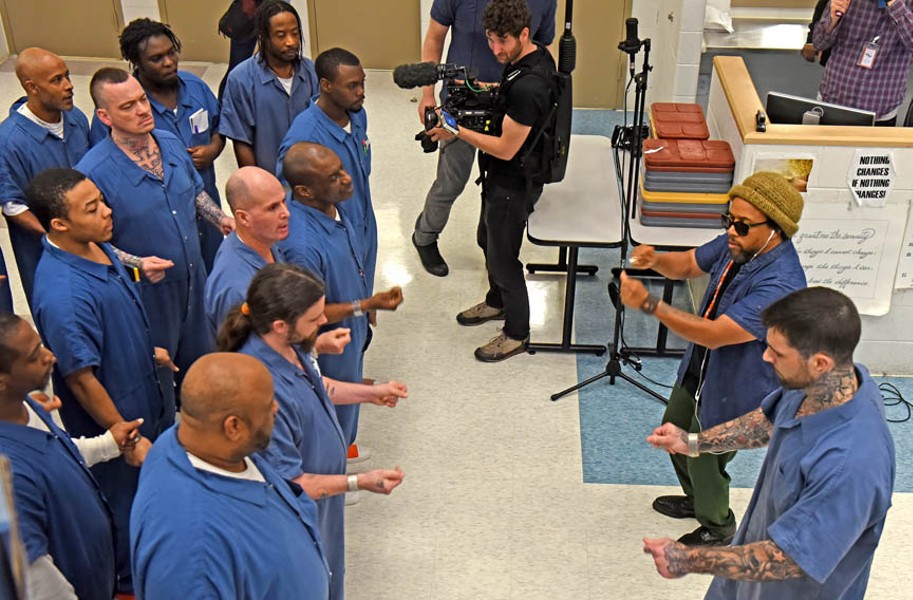 Garland Carr’s voice and guitar playing fill a small recording studio, partially lined with foam and egg cartons, with the command of a seasoned performer.

The 33-year-old is singing an original song he recently recorded with Speech, the Grammy-Award winning artist behind hip-hop group Arrested Development.

“Freedom wind, blow me away,” Carr sings. “I don’t feel so free today.”

It has the makings of a country-folk hit and the tall, tattooed Carr a country singer. But today he’s in a blue jumpsuit and Velcro shoes, waiting for a June court hearing, an inmate at the Richmond City Justice Center.

Speech, the stage name of Todd Thomas, is in Richmond recording Arrested Development’s next album at the jail. He’s using the studio, which has been there since the jail opened in 2014, but mostly he’s there for the talent and inspiration.

“When we got here, I didn’t know how talented or untalented any of the residents were going to be,” he says. “It’s been part of the journey to really interact with them and learn how talented they are. I’ve just been floored by it.”

Speech, 48, says they’ve created nine original songs so far — in a variety of styles, from different musicians in jail. He’ll edit and add choir music to some tracks back in Atlanta, where he’s based.

“The opportunity to be able to create music and interact … that will help people to understand the humanity, the creativity, the repentance, the heart of people in jail,” he says. “And help people understand that these are humans, people that are going through a lot of stuff. And this music is where they express it.”

Carr, who grew up in Mechanicsville, says he has a musical family and dabbled in performance, but the opportunity to collaborate with Speech has forced him outside of his comfort zone.

“I squandered my talent out there,” he says. “I just had other things on my mind.” He says Speech has inspired him to learn the technical side of recording, on which Carr struggled to focus.

“With Garland, it’s been about not getting in the way,” Speech says. “He’s got great songs and great ideas. I let him do what he does and just help out in any way I can.”

“You came through in a clutch with the harmonies today,” Carr says.

A film crew from Resonant Pictures of Brooklyn, New York, has been following these interactions for a documentary about the making of the album. It trails Speech through the jail, setting up scenes with a narrative and purpose. Adam Barton of Resonant says the goal is to have it completed next year.

Both Speech and Barton credit a 2015 CNN segment about the jail’s father-daughter dance for bringing Richmond to their attention. Speech says he’s performed here many times, but this is his first time really getting to know Richmond.

“Just to see the city from his eyes,” he says, “that was very special.”

Speech spent a night in the jail, too, to understand the incarcerated lives of his musical collaborators. “It was unforgettable — the emotional detachment, the feeling I felt in there, which I’d never felt in my life,” he says. “I don’t plan to feel it again.”

Woody checked on him several times that morning and jokes that Speech took too long in the shower. “I told him he owed me for the water bill,” Woody says, laughing. “I think he was trying to wash all those feelings away.”

Speech also was on hand May 16 for the housewarming of a home in Manchester for former jail residents. He performed from the porch, and gave a beat for another performance by an alumnus of the jail’s recovery program.

The album has no release date yet, Speech says, but he’ll return to Richmond for follow-ups later this year — with the rest of Arrested Development at some point — and Resonant Pictures will continue to track the album’s creation.

Speech is met with applause when he enters a common space at the jail to lead a chorus of 22 men in a call-and-response hymn.

“I want to lay my burden down,” Carr sings. He and Speech conduct the swaying men, their voices reverberating off the metal and concrete.

Speech says he hopes his collaborators such as Carr will continue to make music when they’re out. “The straight and narrow — it’s the only path for me,” Carr says. “I feel like I woke up from a long sleep.”