Jesse Daniel aims to give the Richmond Folk Festival a taste of the Bakersfield sound. 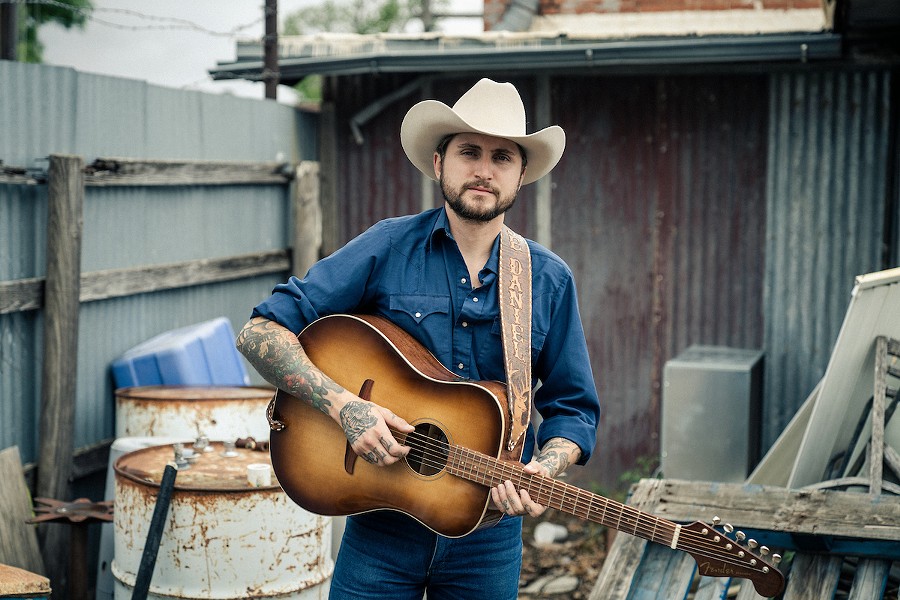 Photo courtesy of the artist Influenced by the electrified, 1950s sounds of Bakersfield, Ca., country and honky tonk musician Jesse Daniel left the punk scene, got sober, and is focusing on his songwriting.

Which is your type of country music? Good news: Jesse Daniel plays it.

That’s not just a nod to Daniel’s stylistic versatility, though he certainly showed that off on his most recent LP, 2021’s “Beyond These Walls.” It’s a reference to Daniel’s down-to-earth approach to songcraft, and the slogan he and his band take with them wherever they go. “We use it on our merchandise,” Daniel says, “and it came to us because fans would always tell us at shows: ‘Jesse Daniel plays my type of country.’”

To Daniel, that means positioning himself opposite the Nashville establishment.

“It’s not like the type of country that you’re hearing, necessarily, all over the radio today,” he says. He’s more keen to align his work with the sounds that started coming out of Bakersfield, California in the late 1950s, a rock-aware subgenre that offered a refreshing alternative to the highly orchestrated recordings captured at that time in the Music City.

"We try to be ambassadors for the Bakersfield sound,” he says. “I’m from the West Coast… so we try to be good stewards of that, and to go out and show people that stuff if they don’t know about it.”

“Beyond These Walls” may have offered ranging moods and arrangements, but his previous full length, 2020’s “Rollin’ On,” was a blast of pure Bakersfield magic packed into 12 impeccably rendered tracks. Regardless of which album you’re spinning, the clarity of Daniel’s lyrics is likely to jump out. It’s the type of writing that reflects attention to detail — “I like to take my time with songs,” he says — and an appreciation for his forbears. “I really liked the Eagles growing up,” the 30-year-old says. “I still do. They were a great supergroup, and a lot of the songs are really great. Simple but [they] get the point across.”

These days Daniel does a fair amount of cowriting with his fiancée, Jodi Lyford, who also provides management support and backup vocals. “A lot of times it will be me coming up with a chord progression or a guitar lick or something,” he says, “and then we’ll build off of that. And Jodi’s really good at, once the bones are there, filling in more eloquent ways to say things.”

The couple now lives in Texas, which is home to a proud history of country songwriting. Daniel cites the work of Townes Van Zandt, Guy Clark and Rodney Crowell as especially impactful, in addition to inspiring contemporaries “too many to name.” That ever-present tradition provided motivation for Daniel and Lyford’s 2019 move to the Lone Star State. “[Texans] revere music,” Daniel says, “especially Texas music. That was a big draw for us in moving there, to be a part of this thing that’s happening.”

Daniel has long been a student of country’s greats, though his path toward launching a career of his own had its share of twists and turns. Some were musical. He started out as a drummer and would sometimes sit in with his father’s classic rock cover bands. He also spent time drumming for punk bands, though even then he was working on his compositional chops. “I always played guitar also,” he remembers. “I would write songs, not always seriously, but for fun and whatnot.”

He was also sidetracked by substance abuse, a topic he took up in explicit terms on “Gray,” one of the weightier songs on “Beyond These Walls.” Right off the bat he sings, “Track marks on your arms, old tattoos and scars / When you gonna learn to hang it up?”

It was around 2015 when he resolved to change his own soundtrack and dedicate himself to the music that gave him a hopeful outlet for his ambition. “I remember there was kind of a turning point when I got clean and sober,” he says. “There’s just so much of the partying, drugs and alcohol [in the punk world]. I know there’s that in country music too, but I felt like it was more of a clear path for me to write songs that were cathartic, and just a better, more positive way to focus my energy.”

He’ll pass that energy along at the Richmond Folk Festival in what will be his first performance in this type of multi-genre event. On the Folk Festival website, he’s listed as “honky tonk country,” and he’s pledged to bring a fittingly high-energy, full-band set to Richmond. If that does turn out to be your kind of country, don’t forget to tell him.