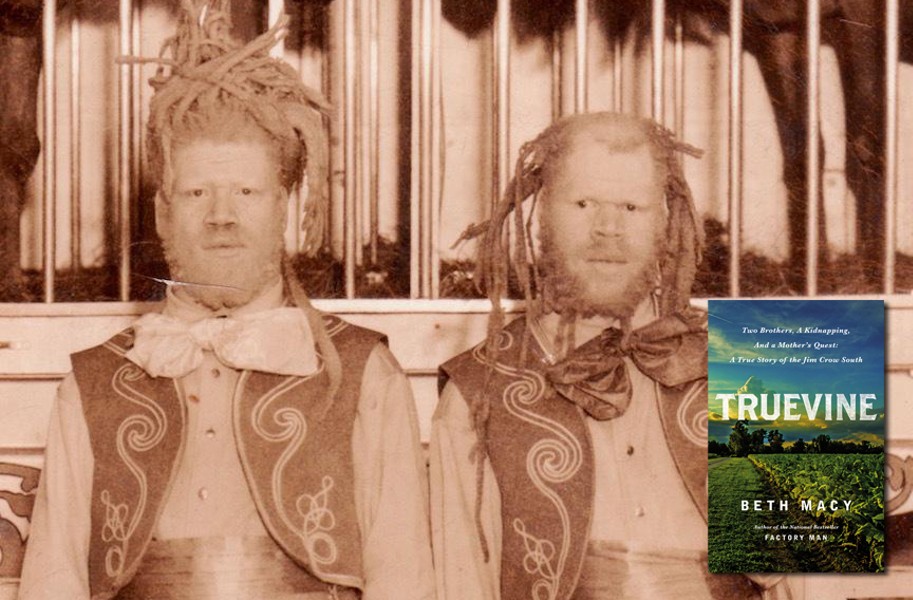 Roanoke writer Beth Macy has a new book about kidnapped brothers George and Willie Muse. The story took her years to track down.

Beth Macy never met the brothers who are the subjects of her new book. George Muse died in 1971, and Willie Muse in 2001 at 108 years old. Their caretaker and great-niece Nancy Saunders agreed to discuss them only then, though Macy had been showing up at Saunders’ restaurant since 1989.

With no first-person interview and only one visit to the brothers’ final home, a less determined storyteller might have given up. The Roanoke author expressed her frustrations to a historian about the holes in accounts about the Muses.

“She said, ‘Give yourself a break,’” Macy recalls. “‘If we only wrote the stories of well-documented people, we’d only write stories of privileged people. You’re writing this story because they were marginalized, and you have to do the best you can with the information you have.”

In “Truevine,” Macy gives readers her best, with a vivid book that’s as much about being black in the Jim Crow South and Roanoke as it is about the brothers. The journalist writes of brutal work conditions, the dangers to life and limb, and opportunities denied from emancipation onward. And she explains how two young brothers could be kidnapped from a farm in the early 1900s and forced to be on display in traveling circuses.

“It was an a-ha moment for me,” she says of her conversation with the historian. “That I also should be writing about why this story has been quashed, why it’s all documented from white, circus businessmen points of view. It’s about historic erasure of these two brothers.”

Willie and George Muse were born with albinism into a African-American sharecropping family in Franklin County. Their milky skin, white hair and sensitive blue eyes made them targets for sideshow proprietors when circuses were abundant and lucrative. Snatched as children, they were displayed as Eko and Iko, marketed as alien visitors to planet Earth, or ambassadors from African tribes.

Their mother, Harriett, fought a long battle to have them returned and eventually was successful. The story became legend as the brothers aged and came under the care of Saunders. As one family friend and professor says to Macy, “The family didn’t talk about Eko and Iko because it reflected the powerlessness of black people at the time; that somebody could come along and take your children, and you had no power over it.”

Their great-niece was protective of the brothers, and sensitive to desires to exploit their difference and their story. Macy spent many years going to Saunders’ restaurant and cultivating her as a source for other stories.

“Meanwhile, she’s reading everything I write and judging it,” Macy says. “She’d bring it up and would have a comment on it. I knew she read me carefully, to see if I would tell a good story.”

Macy finally co-wrote a series of articles about Willie and George Muse in 2001 for The Roanoke Times with Saunders’ permission. More than a decade later, she returned to get a blessing for a book.

Macy’s gifts as a writer are evident in how she fills in the gaps of the story. She pieces together what was known about the brothers’ lives: the scant pictures, the international path of the circus, the Muse family’s movements and the brothers’ eventual return to Roanoke.

Her genealogical research is exhaustive — and an opportunity to discuss the tragic lack of family records for slaves, sharecroppers and their descendants. She interviews every Muse she can find. And she uses similar cases during that era, like Ota Benga, the Congolese man, a Pygmy, exhibited in a cage at the Bronx Zoo in 1906, to describe a world obsessed with genetic pseudoscience and human classification.

In addition to the national praise that “Truevine” has received, there are reports that that Leonardo DiCaprio is in negotiations to option the book and star in a movie about it. Macy’s first book, “Factory Man,” about Virginia’s Bassett Furniture Co., has been optioned for an HBO miniseries in development.

Macy says she’s not allowed to speak about the “Truevine” project yet, but of course would love to see her story in film — “anything that would help bring this story to the forefront and help understand this history that’s come before us,” she says. “It’s good we’re talking about this and acknowledging it.” S

Beth Macy reads from and signs copies of “Truevine” at Chop Suey Books from 6-7 p.m. on Dec. 1, and at the Library of Virginia from noon-1 on Dec. 2.