A Floating Protest Against the Atlantic Coast Pipeline Arrives in Richmond Sept. 8 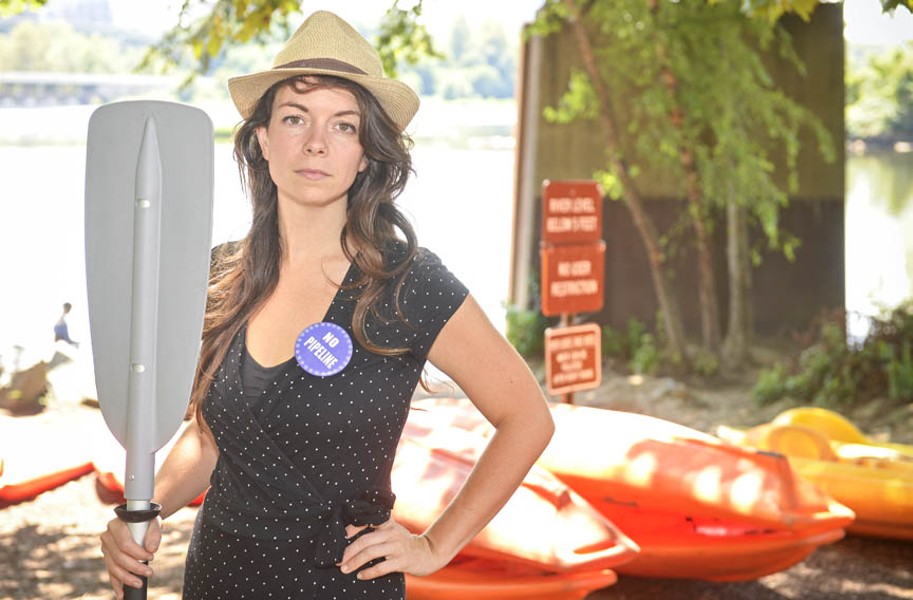 Row your revolt, gently down the stream. On Wednesday, Sept. 6, a group of about 40 kayakers will paddle towards Richmond as gubernatorial candidates arrive for a debate. The group, Journey the James Flotilla, is organized by the Earth Folk Collective and says Ed Gillespie and Lt. Gov. Ralph Northam should address how the Atlantic Coast Pipeline could place Richmond’s drinking water in jeopardy. The 600-mile pipeline has loomed large during this election season, and it will likely influence the way the candidates navigate their discussion about water quality issues.

“This pipeline would disturb James River headwaters and run directly under the river,” says organizer Laney Sullivan, whose multiday river voyage started on Sept. 4 in Buckingham County. “Already, Dominion Energy is every day polluting the James with coal ash wastewater. They should not be allowed to build any more infrastructure until they’re responsible with their current projects and no longer routinely abusing the environment.”

Northam and Gillespie will attend the Clean Water Forum, held at the National by the James River Association and Chesapeake Bay Foundation. Both candidates have received donations from Dominion, which is collaborating on the pipeline with three other energy companies. A moderator will prompt candidates to “speak directly to the issues affecting our waters in order to inform voters on these important issues,” says Bill Street, chief executive for the James River Association.

“Water is our most precious natural resource,” says Street, who has a record of holding the energy industry accountable. In March, the nonprofit reached a legal settlement with Dominion that obligates the company to treat the wastewater before it’s discharged by Bremo Power Station into the James River and to regularly test fish tissue. “As the commonwealth’s top official, the governor plays a paramount role in ensuring the future health of the James River and the rest of Virginia’s waters,” he says.

Northam’s neutrality on the pipeline has brought him unwanted attention. Anti-pipeline activists have heckled, booed and even ambushed his stage, urging him to take a more definitive stance. These tactics haven’t worked, and Sullivan says she’s aiming to apply pressure with a nonviolent gesture. Both Gillespie and Gov. Terry McAuliffe have publicly supported the pipeline, citing it as a job creator. Northam has been consistent in one way: He’s frequently asked the Army Corps of Engineers to properly assess risk scenarios.

But Sullivan says that suggestion has led to a game of political hot potato. Under the Federal Clean Water Act, there was supposed to be an assessment of hundreds of streams to see if the pipeline’s construction would degrade Virginia’s water quality. Instead, the Corps of Engineers circumvented this lengthy process with a blanket national permit. Section 401 of the Clean Water Act would allow the state to demand a more exacting examination, so pipeline advocates are closely watching how the next governor will respond. Dominion’s chief executive, Thomas Farrell, wrote a message to 76,000 employees and shareholders in May, urging them to vote carefully. In August, the state’s Department of Environmental Quality accepted public comment on Section 401, but has yet to deliver recommendations to the State Water Control Board.

“The State Water Control Board has a history of rubber-stamping and voting in line with the DEQ,” alleges Sullivan of the organization tasked with upholding the public’s interest. This sentiment has even been echoed by Gillespie’s former competitor, the controversial Republican Corey Stewart, who called the board a “toothless organization” for allowing Dominion’s coal ash to enter Quantico Creek, Inside Nova reported. One reason politicians and activists may distrust the board is that, as previously reported in Style, the department’s director, David Paylor, has accepted gifts from Dominion in the past.

Sullivan says she hopes this week’s river journey will also help attract donations to the GoFundMe campaign for Journey the James Flotilla. The first $1,000 will be used for the protest, she says, and the rest of the funds raised will go to water collection and testing. She wants to contract the James River Association to find a lab for sample analysis, and then present results to the DEQ.

Meanwhile, the state has no recent precedent for dealing with public assembly on the James River. Sullivan says activists will disembark before reaching the city limits and then regroup for a more traditional demonstration in Richmond on Sept. 8. “Please be as self-sufficient as possible,” she says on the Journey the James Flotilla’s website, which lists checkpoints for kayakers who wish to come along. “We are not responsible for your health and safety, so please honor your personal limitations.” S