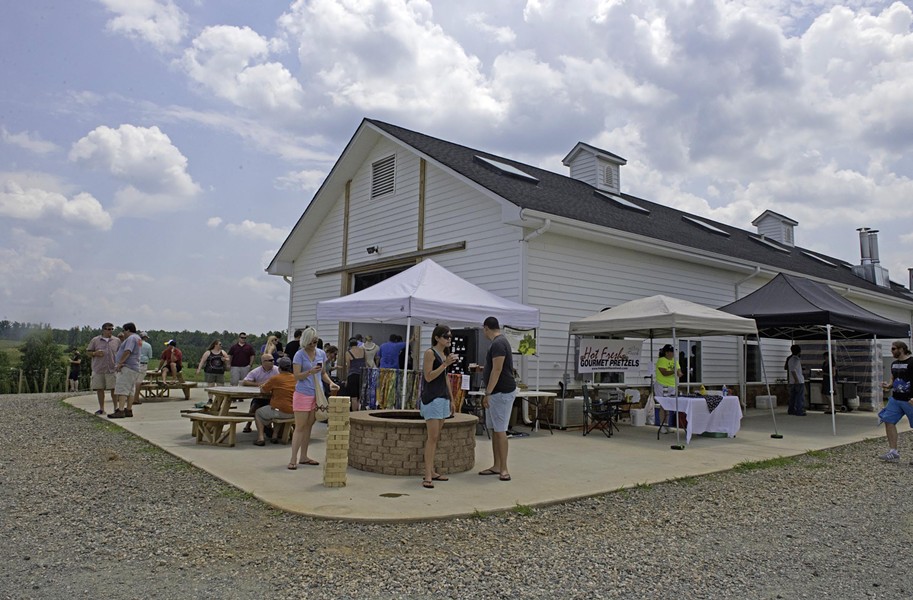 A small caravan approaches the hill, surrounded by fields and woods.

Aside from the rolling crunch of vehicles on the gravel road, the only other sound is of chirping birds, saluting the stupefyingly beautiful day. The scene seems far removed from the industrial machinery required to brew beer, but a brewery is exactly what this place is.

Lickinghole Creek Craft Brewery has been turning out the suds since September, working from a building designed to fit the pastoral setting. On this early July day, the brewery is preparing for a pirate-themed event to launch its Batchelor’s Delight, a rum barrel Belgian-style quad ale. The trucks will help distribute the beer to roughly 1,750 people during the course of the weekend.

“When we were planning this, we didn’t realize anyone would ever come out here,” owner Sean Pumphrey says after getting out of an SUV. The brewery is so far removed from major roads that he’s considered printing T-shirts: “I can’t believe I found Lickinghole Creek.”

A Short Pump native, Pumphrey went to college in Montana, and watched the 1990s rise of beer culture in the Pacific Northwest firsthand. He returned to Richmond in 2001, and began home brewing to create the kinds of flavors he couldn’t find here.

“My mantra was brew what you can’t buy,” Pumphrey says. “I could see there was a huge opportunity for craft beer here.”

He received a graduate business degree and began working to put a brewery on his in-laws’ 220-acre farm in Goochland County. To keep the integrity of the land, Pumphrey built the brewery to look like a horse barn. Lickinghole took two and a half years to open, and included changing Goochland’s zoning code to allow for a microbrewery. Bringing a brewery to the country had its unique set of challenges.

“It’s kind of like putting a brewery on the moon,” Pumphrey says. “There was no electricity, no water, no way to treat your wastewater.”

Since it opened last fall, Lickinghole Creek has been on a roll. Beer Advocate gave its bourbon barrel Russian imperial stout, Enlightened Despot, a score of 94. The site also gave a 94 to its bourbon barrel Three Chopt tripel, and named it the fourth most popular triple in the world. The Magic Beaver Belgian-style pale ale received a score of 85.

While Pumphrey is pleased with his early success, he has big plans for the brewery. Every beer he brews uses well water from the farm, and in the fall he plans to release an estate series, incorporating more ingredients from his land such as pumpkins and rosemary. With honey as an ingredient in his Nuclear Nugget imperial honey IPA, Pumphrey thought about building an apiary, but was concerned about attracting bears.

He hopes to create a beer in which every ingredient comes from his property, giving it terroir like wine. The beer will use barley and hops grown on-site, as well as a yeast strain developed by RVA Yeast Lab from a beech tree. He also recently worked with Sugar Shack Donuts to create an Enlightened Despot doughnut.

Pumphrey is aware that many of his beers have suggestive names, but he says he’s just naming them for the surrounding geography. Near his brewery are Big Lickinghole Creek and Little Lickinghole Creek; his Belgian-style pale ale is named for Magic Beaver Pond on the farm. But perhaps naughtiness is in the ear of the beholder.

At a craft beer event in Washington it wasn’t the names of his beer that attendees found funny, but the names Goochland and Short Pump. They asked if Goochland was a real place, and had their own interpretation of Short Pump, he says: “They thought it meant a quickie.”