One of Richmond’s music institutions, Bio Ritmo, celebrates 30 years with a big, beautiful get-together at Hardywood.

Peter McElhinney Beloved salsa band, Bio Ritmo, performs a free 30th anniversary day concert this Sunday, Oct. 23 at Hardywood Park Craft Brewery in Richmond. With several former members planning to be there, it should be a very special show.

The group Bio Ritmo’s free-range approach to Latin dance music nods at tradition and then charges off in its own direction. To the casual listener, they are an exciting salsa band. To the conventional salseros, their creative genre transgressions are either revelatory or heretical.

And to bandleader and keyboard player, Marlysse Simmons, any concerns about genre authenticity are less than a distraction. “We’ve been playing this music for 30 years,” she says. “It’s Bio Ritmo music.”

An inadvertent institution with a well-earned global reputation, Bio Ritmo belatedly celebrates its 30th anniversary with a free midday concert at Hardywood Park Craft Brewery in Richmond on Sunday, Oct. 23rd, which will include many former members such as original founder and singer, Jorge Negron, Hector “Coco” Barez, Gabo Tomasini, Jim Thomson, and more. 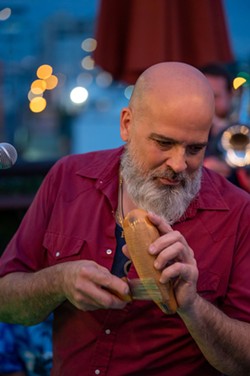 The band’s evolution breaks down into four, hazily defined incarnations; as hard-partying, punkish beginners, as an aspiring salsa band, as a polished commercial act, and finally, as the current ensemble with its own confident voice. Over three decades, members have come and departed. Many of them will be present at the hotly anticipated, Hardywood anniversary show.

The first iteration of the group was the result of percussionist Jorge Negron’s part-time job arranging workshops at the Science Museum of Virginia. In 1991, he was tasked with putting together a series of percussion interludes for showings of the IMAX documentary “Ring of Fire,” about volcanoes and seismic activity in the Pacific Ocean. He assembled a band of fellow Virginia Commonwealth University art students, including Jim Thomson (Gwar, Alter Natives), Rei Alverez, and Ed Trask (Kepone, Avail). The band started with three, 20-minute hand drum performances at the Science Museum. The success of that event led to local bar gigs and picking up like-minded players who wanted to explore the music, including percussionist Gabo Tomasini and bassist Shade Wilson.

“That first year we were a partying band, literally just repeating a percussive dance groove all night,” remembers Alverez. “We were playing salsa-type music, but we weren't a proper salsa band by any means.” Now Bio Ritmo’s front man, in the early days Alverez was the timbales player. “I had no interest in singing in front of people,” he says. But when he left the band for several months in the fall of 1992, the timbales spot was filled by Tomasini’s friend, destined to be the band’s most consistent member, Giustino Riccio.

“Rei shared the vocals with Jorge,” Riccio says. “Charlie Kilpatrick played piano. By mid-‘93, we would like to say officially we that we were salsa. But we had two alto saxes, which is a very odd sound for a salsa band. The closest thing was Dominican Merengue.”

Negron did all the booking, and the band started playing all around Virginia, including Harrisonburg, Charlottesville, and the Eastern Shore. Getting it right became important. Negron’s father was a somewhat legendary DJ with a huge record collection that provided a rich lode of salsa tradition and instruction. Riccio, previously a rock drummer, became “Inspector Clave,” rigorously enforcing adherence to the essential percussive pulse of the music.

At the end of 1996, Negron’s father died, and he moved back to Puerto Rico. “You play because you want to play,” Negron says. “I was not a full-time musician, but I was the one pushing and organizing. I sang because someone needed to. I am really an MC. Give me a microphone and I will talk. But I do not read music. And when you invest time, you want to make money. Things get more formal. With a ten-piece band there is a lot of responsibility.” 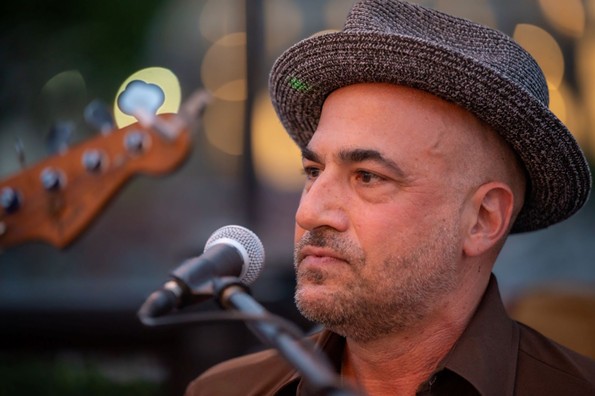 Rene Herrera filled the void left by Negron’s departure. A Cuban refugee sponsored by the family of Kuba-Kuba owner (and honorary Bio Ritmo member) Manuel Mendez, he is a graduate of Havana University.

“He was the first real deal educated Latin musician in the band,” Riccio points out. “He could play six instruments and could write out arrangements. We started learning why we were doing things, what different sections of the songs were called. Bob Miller came in to rebuild the horn section. Rei quit, and Rene took over the singing. Our second album, ‘Salsa Galactica,’ is very different, more technical. I do not think he planned it, but Bio Ritmo became more Rene’s vehicle.”

Soon the band had a contract with a division of Mercury, a major record label. For its next record, “Rumba Baby Rumba,” the group received a $50,000 advance, and tour support while opening for bands like the Squirrel Nut Zippers. “That was a crazy time,” recalls Riccio. “The suits at the label were saying, ‘This is just the first of a long string of records and you guys are going to be huge,’ and all that BS. And we went for it. [But] the sound of the band was sacrificed. That was really such a learning experience. How the industry works. How difficult it is to hold on to your personal sound."

“We didn't have a record deal anymore,” Riccio says. “And that was when a lot of us decided that we tried, but it did not work. We were not really happy with music that felt more like a product than art. We almost broke up, I guess some people would say we did break up, but never like, made it official. In 2000, we all started going our separate ways.”

Alverez returned to find the band in an experimental mode.

“They were just kind of doing whatever,” he says. “They were working with a rapper for a little bit.” The 10th-year reunion in 2001 proved to be a pivotal moment. “I suggested that we just pick up in the style that we had in the first album. And that was the start of the current approach,” he adds.

Alverez was in and Herrera left to chart his own successful path in salsa. Trombonist Toby Whitaker added more heft to the horn section. The band started area tours again, and when the piano player could not make a gig because his wife was giving birth, the reborn Bio Ritmo discovered the final, essential piece of the current lineup, Marlysse Rose Simmons.

“If it wasn’t for her,” Alverez admits. “We wouldn’t be talking.”

Simmons is at once a totally distinctive keyboard voice, an incredibly talented composer and arranger, and the person who does the vital work of scheduling the gigs and making sure everything comes together- the roles played in the past by Negron and Herrera.

“She's the boss, the leader, the manager," Alvarez said in a 2014 interview with Style Weekly. Originally, he was hesitant about a female addition to a testosterone-heavy dynamic. "Afterwards, we had to figure out how to tell our pianist he was no longer in the band," he says. "She was magic, the missing part of the equation. The band really needed some estrogen, sensitivity, organization."

The group's self-titled 2004 album, which the band calls “the green album” for its Alverez-designed cover, documents the start of its modern sound.

“It was self-titled because we were kind of going back to square one,” Alverez says. “We really felt like it was a new beginning for us, back together with the same aesthetic purpose in mind, you know, playing our particular kind of salsa.” The album features all originals with music mostly credited to the band and evocative, poetic lyrics written by Alverez. “Rei was always a great writer,” Negron says. “I know you guys [who do not speak Spanish] do not know what he is talking about. But I do, and he has real talent.”

“The greatest thing that ever happened to us was when we lost that major label deal,” Riccio explains. “We stopped caring about being successful, about what the record company is paying us to do. We all love the old school ‘60s-‘70s, but we are not trying to copy them. We are doing what we do naturally, for better or worse." He notes that Alvarez and Simmons, who are married and now have a child, work well as a team: In practice, Alvarez comes with the lyrics and melodies, Simmons adds the harmonies, and "the band all has a part in the final performance,” he says.

Like any great team, it all has to mean something to the players. “It is like they say on an airplane,” Alverez says. “Put on your oxygen mask before helping others. Because if you are not looking out for yourself, you will be useless to anyone else.”

Such creativity does not easily fit into the increasingly DJ-driven contemporary salsa club scene; dancers expecting predictable tempos and classic hits. But as the virtual inventors of indie salsa, Bio Ritmo's music casts a long global shadow with ardent fan backing in Paris and Cali, Colombia, where there is a bar named after one of its songs. Word has spread: The next generation punk/ska/salsa band from Puerto Rico, Orquesta El Macabeo, even came to the US to record with them.

As always, the future remains uncertain. Big bands are logistically unstable and economically challenged. Alverez and Simmons are both heavily involved in their breakout bolero revival project, Miramar, which has received national acclaim and press. Everyone in the group has other jobs and projects. The upcoming 30th anniversary gig is a landmark, even if it is nowhere near the end. Negron is flying up from Puerto Rico. So is the brilliant percussionist Hector "Coco" Barez. And familiar music maven Jim Thomson, founder of Electric Cowbell Records, is coming down from Brooklyn, bringing advanced copies of an unreleased Bio Ritmo EP, “Salsa System,” recorded years ago with legendary salsa engineer Jon Fausty. Other past players are planning to sit in for a song or two. “That’s what I am looking forward to most,” says Alverez. “It’s not just a band, it’s a family.”

If even a small percentage of the local population that loves the band comes, there will already be a big crowd. Newcomers will be blown away by this musical treasure in our midst. What should they expect?

“We’re a big band,” says Simmons. “Playing Latin dance grooves with four or five horns, and a lot of percussion. It gets loud. Everyone is so excited; people are going to be switching in and out. This show is going to be bonkers.”

In other words, classic Bio Ritmo.

Bio Ritmo performs at Hardywood Park Craft Brewery at 2410 Ownby Lane on Sunday, Oct. 23 from 2 p.m. to 6 p.m. There will be performances by Kadencia, Jonathan Austin, and JAMinc will be streaming the event. The event is free, but partial proceeds of any sales will benefit Gallery5.