The people behind Stella’s restaurant branches into Greek fashions. 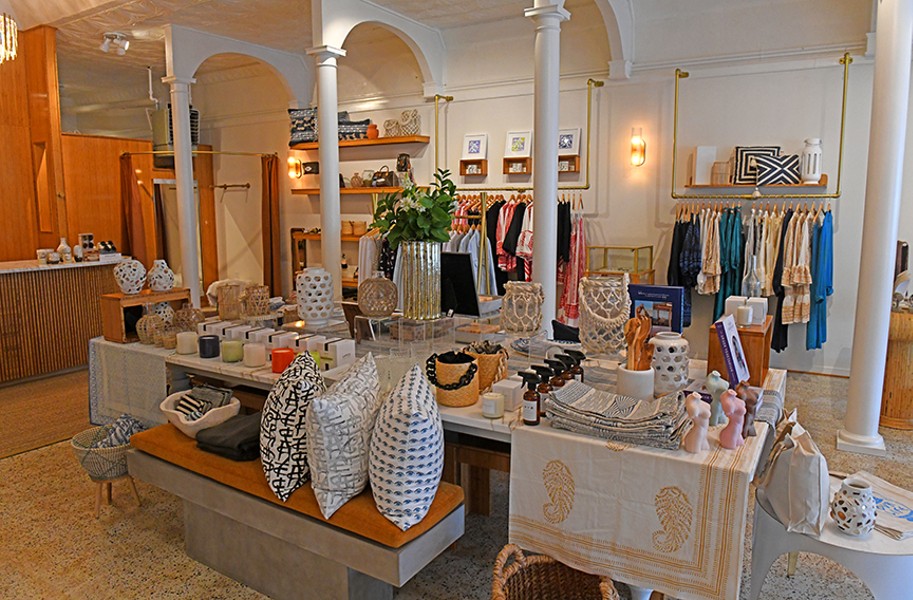 Katrina Giavos’ first passion was always fashion. Despite having Stella Dikos for a mother, she knew she wanted no part of the restaurant business. Her dream was to spend her career in New York working in the fashion world.

Marrying a restaurateur — she and husband Johnny Giavos own Stella’s and 10 other restaurants — didn’t help her cause any. But a couple of years ago, Katrina and her daughter Maria were talking about how wonderful it would be to not only offer Greek food to Richmond, but other Greek experiences as well. They began testing the idea last July with a pop-up every other week, their shop housed in a pale blue and white tiny house they parked on Lafayette Street across from Stella’s.

Originally, Katrina and Maria purchased merchandise online from Greek sources, then made their first buying trip to Greece in August to meet designers and visit showrooms in person. “Being connected to our heritage — and to Mom — that is a special thing,” Giavos admits. “And we’re not trying to do anything that anyone else in Richmond is doing.”

Customers took note of the distinctive inventory and when the building next to the restaurant was sold, Giavos pitched her idea to the new owners. Not only did she envision the space as a shop for Greek-designed clothing, shoes, jewelry and housewares, it made sense to include a waiting area for diners to cool their heels until a table opens at the perpetually busy restaurant.

“I started thinking, how great would it be to have an event space here, too?” Giavos recalls, noting that the restaurant gets scores of requests for private events but has nowhere to accommodate them. “My next thought was that if we do this, we have to make it look like Stella’s.” Jeff Killen, who built all of the Giavoses’ restaurants, was brought in to craft the vision, which includes a long communal table like the one at the restaurant.

Our Life by Stella’s opened in December and had an inaugural private event in the space during the first week in February. The vision has expanded to include Greek wine, with occasional wine tastings, and foodstuffs — small farm beans, pasta, olives, salt and olive oil — plus a Greek coffee bar with pastries and cookies such as melomakarona, Greek wedding cookies and sesame bread rings, made by Maria and her grandmother, Stella.

“When we thought of all the things we wanted to do in one space, we wondered if it would be weird,” Katrina laughs. “But it kind of worked out.”

Walking into the space feels less like entering a store than a beautifully appointed room. A rug separates the coffee bar from the lounge area, where a large woodprint tribute to Greek mythology made in the ’80s by Johnny Giavos’ Greek cousin, hangs over a banquette. The print began its life in America on the wall of the original Athens Tavern.

Farther back, racks of colorful clothing attest to the artistry of Greek designers.

“We did listen to people at the pop-up,” Giavos says. “People associate Greek with summer and wanted the kind of light, flow-y dresses they saw there on vacation.” Many are made with washable silk, a concession to the Greek heat. Some designers look to native folk dancers’ costumes for inspiration and many use only local materials and makers. Vintage sweatshirts are hand-embroidered with “Opa!” and 100% Greek cotton “Love Greece” T-shirts make for an elevated take on a traditional souvenir. The mother and daughter team intentionally seek out women-run businesses whenever possible.

Also available are Greek-made shoes, such as espadrilles and sandals, as well as handbags, including from a company that takes vintage Louis Vuitton bags and paints them with matis, the all-seeing Greek eyeballs that, according to superstition, ward off the evil eye.

The curated selection of Greek jewelry represents a range of metal artistry, including brass bracelets with holes punched out so Greek patterns can be embroidered through them, jewelry made with Grecian marble and high-end gold jewelry.

Basically, the store nods to the family’s heritage.

“My mom, my brother and I debated what to name it and we knew it had to uphold the Stella’s name at the end of the day,” explains Maria. “This is our life and our lifestyle, full of all things we like. The name came about pretty naturally and it stuck.”

For Katrina, the store is a long-delayed passion, but it has other benefits, too.

“It’s fun and kind of great to see Maria take over and learn a lot from our family work ethic,” she says. And for restaurateur Johnny Giavos, it’s even easier.

“I’m just a cheerleader here. I just cheer them on,” he says.