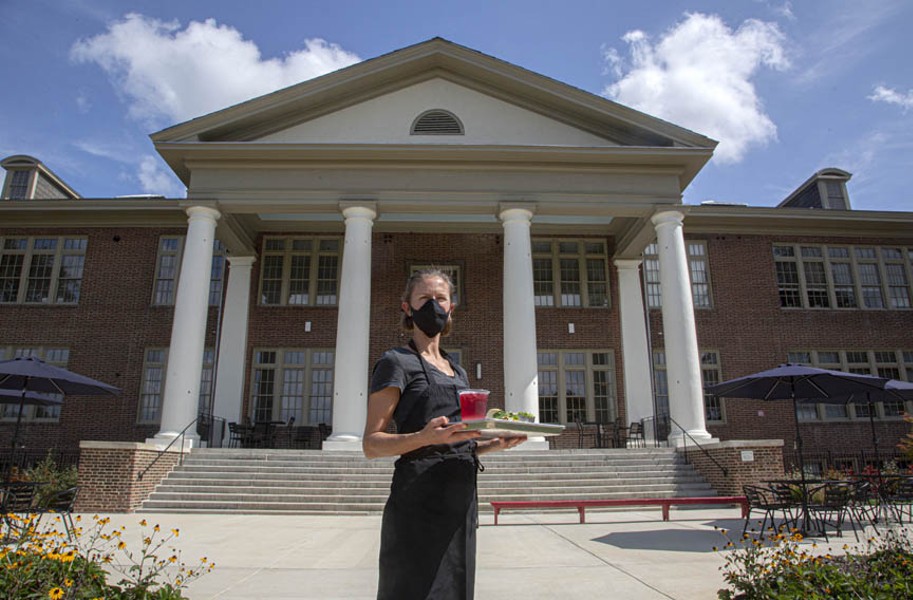 Veteran chefs Rachel Best and Ben Watters shade their eyes in the midafternoon sun, gazing out over a schoolhouse portico.

“You can see the sunset over the city from here.”

It’s just two days before Blue Atlas’ – named for an eye-catching evergreen tree – grand opening on Sept. 25, and with its final freezer making its way to the states at the eleventh hour, the pieces are nearly in place.

Best and Watters are ready for the challenge of opening an entirely new concept in a brand new space during a pandemic: Watters’ resume includes cheffing at Lemaire and Aloi, and Best just finished her latest job in August as R&D chef at Ellwood Thompson’s Local Market. Before that she was sous at Secco and executive chef at Leaf Vegetarian Restaurant in Boulder, Colorado.

But this is the couple’s first time owning their very own restaurant and market, and they have a 1-year-old.

In the mixed-use, recently refurbished Schoolhouse at Artisan Hill, which houses both apartments and artist studios, Blue Atlas Market and Restaurant has been in the works for at least two years, but the two are easing into opening. The market opened Friday, Sept. 25, for breakfast and lunch. Going forward they’ll be open Tuesdays-Sundays from 8 a.m. to 6 p.m.

“Because this is a historical building, this is all chalkboard from the school and those panels are from the principal’s office,” Best says, pointing out the thoughtful details throughout the space. A quicksilver tree mural climbs up the doorway of the dining room entrance. “One of the studio artists did that for us.”

It’s a bit uncanny, waltzing into a grand, century-old schoolhouse and finding – a few beats down the waxed hallway – a chic, well-stocked market and modern dining room that opens onto a white-columned portico. Nostalgia-inducing sure, but there’s just too much to look at to get sucked into memories of pop quizzes and wicked school marms.

And the ‘menu is divine.

For lunch, Best says the market will be offering salads and sandwiches – think fresh greens with an array of toppings, plus sauerkraut-topped Reubens and chicken-liver-mousse banh mis.

It’ll stock grab-and-go items, plus affordably priced vino, local six-packs, Carytown Teas and Blanchard’s Coffee. Once it’s up and running, the ceramic studio downstairs will send up hyper-locally made pottery for sale. There’s a lunch counter, full coffee bar and ample seating on the portico and adjacent green space. The couple say they drew inspiration for the market setup from Ellwood’s, naturally, plus Union Market, Stella’s Grocery and Outpost.

“I’ve been lucky enough to live abroad and do a lot of traveling,” Best says. “If you look at world cuisine there’s so much crossover with products, it’s just presented in different ways.”

The restaurant side – which even with social distance can comfortably seat upwards of 40 people in the dining room, the spacious hallway and a community table in the market – is set to officially open for service Tuesday, Oct. 13, though it will have a soft opening that weekend (Oct. 10 and 11).

The dinner menu is about as global and far-reaching as your culinary mind could conjure, drawing from Watters’ French training and Best’s vegetarian-focused culinary acuity.

Items include okonomiyaki, Jordanian flatbread with egg yolk, cold miso salad and harissa tofu with couscous. That lunch-to-dinner menu crossover looks like dinnertime apps such as sauerkraut and pierogies and chicken-liver mousse with corn cakes.

Best suggests that because travel outside the U.S. has been limited during the pandemic, the Blue Atlas table may serve as a salve for your burning wanderlust.

“People all over the world make meals out of what they have and come to the table together,” Best says. “It’s neat to bring people together through food and flavors. … The dinner plates will be smaller, so you can taste a little bit of the globe in one sitting.”

And because it’s in a former classroom, maybe you’ll get a bit of education, too.