The Valentine explores parallels between the 1920s and present day in new fashion exhibition. 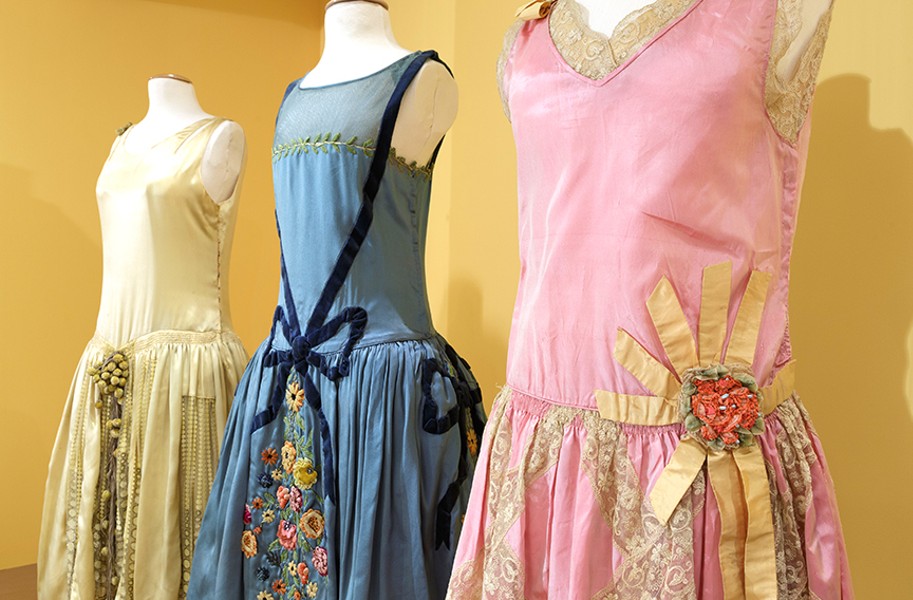 “The 1920s are universally beloved, but Richmond has a particular affection for that decade.”

Kristen Stewart, the Valentine’s Natalie L. Klaus curator of costume and textiles, conceived of the museum’s newest exhibition, “Ain’t Misbehavin,” over a year ago. Little did she know how the themes – assiduously collected and organized in the U-shaped gallery space — would resonate in the summer of 2020.

From art deco architecture to “exquisitely beautiful” textiles, Stewart understands the fascination with the Roaring ’20s. Women and men were finding freedom in their sartorial choices, from bathing suits to golfing outfits. And while the glittering evening gowns and lavish Scott Fitzgerald-esque fetes are what we most associate 1920s fashion with, Stewart says from an aesthetic perspective, the “shiny, glittery fun” is merely a patina. “Anecdotally, it’s a very complex decade.”

It was a fast and furious time – babes, dolls and molls were finding their own way, absorbing every printed word and Charlie Chaplin film with relish. For the first time, Stewart notes, the teenage gaze was turned outward.

“From the very beginning, the rise of new media intersected with the rise of youth culture,” Stewart says. “These young beautiful people are stars in moving pictures and teens are looking at other teens (or at least people pretending to be teens).” No longer resigned to following in the footsteps of their parents and grandparents, those coming of age in the 1920s were able to “build ideas of themselves,” Stewart says.

There are parallels, of course, between the nascence of 1920s youth activism and the reckoning we’re seeing across the country today. Tik-Tok teens and K-Pop stans — some not even old enough to drive — managed to infiltrate and tank Donald Trump’s Tulsa, Oklahoma, rally in June. Confederate monuments are coming down in Richmond daily, and the fervor of present-day youth activists has yet to fizzle out.
A century ago, such fervor found a home within the women’s movement.

“There was increased equity for women, girls were getting high school diplomas and college diplomas,” Stewart says. “Young women were expanding their ideas of what was possible for them, with a lot of pearl clutching and fretting as a result.”

Leisure activities were more affordable and evenings devoted to dance and drink led to clothing that eschewed the limiting fashions of earlier decades. A woman’s body was no longer confined to one silhouette. Accentuated busts, 24-inch waists and voluminous petticoats were a thing of the past.

In addition to the well-documented straight silhouette, Stewart says another popular style was the French robe de style – it had the same straight shape on top with a drop waist and wide skirt. The museum will have two evening dresses and a bridesmaid’s dress in this style. “They typically have youthful, sweet color palettes and ornamentation and detail, I’m excited about that,” Stewart says.

Another piece she’s excited about, on loan from the Maggie L. Walker National Historic Site, is Walker’s swimsuit. Part of a vignette, the suit will be displayed next to a kimono Walker would have worn around the house and a photo of the revered teacher and businesswoman in her bathing costume surrounded by family and friends.

As a successful Black upper middle-class woman, Walker exemplifies the best of the decade. “She was paying attention to the changing times and taking advantage of innovation,” Stewart says.

“And the bathing suit and kimono exemplify the other side of that coin – she was successful, and she was going to participate in the leisure that was available to her. As someone running an organization and as a leader in the community, I would suggest she was intending to make a statement in her public and private life.”

But even with the success stories and new opportunities the ’20s presented, Black women, men and children were still treated as less than. They still had to fight every single minute of every single day, a reality that Stewart, as a curator, is all too aware of.

Part of the Valentine’s exhibition is labeled, rhetorically, “Who Is Missing Here?” The collection of shoes and dresses and photographs only presents part of the story – there’s a gaping narrative hole, a loss felt by most institutions as old as the Valentine.

“We have no examples of evening wear worn by African American women,” Stewart says. “We know that Jackson Ward had such wealth and style, you know those clothes were good. We are acknowledging that travesty of loss and will have a tribute to the missing stories in the show,” Stewart says. “If there are 1920s-era clothes from Jackson Ward that still exist, I’m putting a call out – we’re looking for those.”

“Ain’t Misbehavin’: 1920s Richmond” opens at the Valentine on Tuesday, July 21. To see this and all other exhibitions, reserve your tickets online at thevalentine.org. Admission is free throughout the summer.