A Critic’s Guide to the Richmond Jazz Festival at Maymont

With nearly three dozen acts staggered across three stages in one of Richmond's most beautiful locations, the Richmond Jazz Festival is arguably the overstuffed event of the year.

The festival at Maymont has evolved into a winning balance between the crowd-pleasingly commercial and the adventurous. And the path between performances is a gauntlet of temptation, wine tastings, Afro-centric artisans, craft beer, Soul Ice and gourmet food trucks.

The crowd is a friendly, multiracial mix of people from the area and far away. At a bit less than $80 dollars a day, it may not be the least expensive performance deal, but it's hard to find one with a higher return on investment.

Now in its ninth year, the festival has settled into a well-honed groove. The best strategy may be to come early, stake out your base camp either at the premier Virginia Is for Lovers or Dominion Energy stages, then make forays to the other venues. But opinions differ.

"Some people stay for the whole day, others come and go," says Frances Burress, a key member of the JMI (formerly Johnson Inc.) team that organizes the event. "Last year I know there was someone who came just to hear one artist." She estimates that roughly 15,000 people will attend the late summer event. "We're always surprised at how much red wine we sell."

The headliners necessarily reflect the broadest appeal. This year it's a bounty of baby boomer soul: Gladys Knight, the O'Jays, Maze featuring Frankie Beverly and George Clinton and Parliament Funkadelic (see interview). Moving down the bill is moving forward in time. Tony! Toni! Toné! and golden age of rap East innovators Eric B. and Rakim, and West Coast pioneer Warren G. made their first big splashes in the '80s. A bit of millennial counterbalance is provided by 31-year-old blue-eyed soul singer Joss Stone.

That each iteration of the festival has its own eclectic personality is due to JMI's chief executive, Kenneth Johnson, who picks the lineup [see Q&A]. Past events featured artists such as Robert Glasper (2013) and Kamasi Washington (2015) on the cusp of their national success. This year's class includes 27-year-old Thelonious Monk competition winner Jazzmeia Horn, stellar sideman-turned-leader trumpeter Keyon Harold, and phenomenal young pianist Christian Sands.

It's hard to classify Butterscotch from "America's Got Talent," the only performer to appear twice. Her beat-box and singing skills are undeniably spectacular;. It will be interesting to see if the sonic novelty can be transformed into art.

Seventy-seven-year-old vibraphonist Roy Ayers and iconoclastic trumpeter Nicholas Payton are the closing acts on Stage 3, the festival's traditional straight-ahead jazz venue. But the local buzz in that category is for Kurt Elling, arguably the dominant male jazz vocalist of the past 20 years.

One of the most significant evolutions in the festival is the displacement of smooth jazz by R&B. In the early years, the wind chimes, synth washes, and warm saxophone melodies were everywhere. This year, the genre survives in sets from Euge Groove and the duet of Nelson Rangel and Steve Oliver, and in the opening night show at the Hippodrome.

Tough choices are at once the downside and charm of the festival. Whatever your musical tastes, there may be more than one good choice at any given time. Even the Thursday night free concerts require a decision: either James "Saxsmo" Gate's all-star ensemble in the Virginia Museum of Fine Arts' Jazz Café or Evolution of the Groove outside at Hardywood. 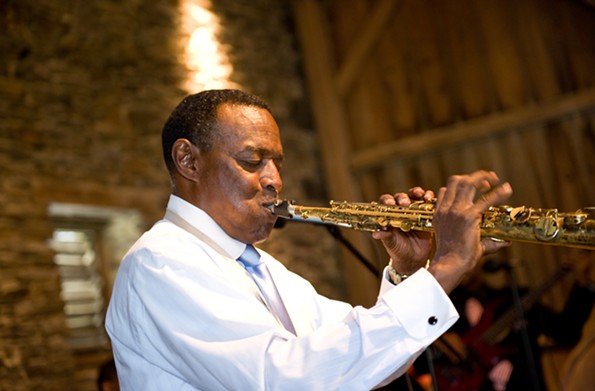 Perhaps the hardest choice of the event is between the two most world-music-centered bands. Ladysmith Black Mambazo's gentle a cappella harmonies became the iconic soundtrack of South African liberation. Brooklyn-based Red Baraat is basically a rambunctious No BS Brass cousin with a strong South Asian accent. They may appeal to the same audience, but they compete for ears at opposite ends of the festival.

There is some consideration of re-branding the event, given roughly half of the content at the festival falls outside the agreed boundaries of jazz. There is the standard jazz purist complaint about the inclusion of other music, but, then again, complaining about impurities is pretty much the whole point of purism.

On the other extreme, 2018 performer Nicholas Payton holds "There is no such thing as jazz. … The very existence of jazz is predicated upon a lie, just like racism."

These are interesting theoretical arguments and cases, but they may be of limited interest to the thousands of people spending a summer weekend listening to their heroes and discovering new artists amid Maymont's sylvan beauties.

The ethos of the festival is closest to Duke Ellington's famous dictum.

"There are simply two kinds of music," he said. "Good music and the other kind."