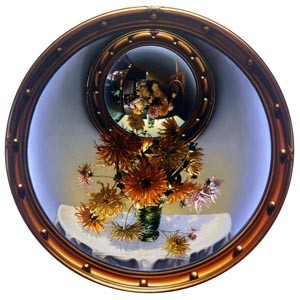 Few artists could be happy about sharing proximate exhibition space with Nancy Witt. Her hyperrealistic painting style, paired with metaphysical subject matter, dominates even the most active setting. In the exhibition of work by the late artist and her three surviving sons, also artists, at Westminster Canterbury's November Gallery, Witt's enigmatic genius drives the show while work by David Camden, Brad Camden and Jeremy Witt takes a back seat.

Armed with a crafty hand that could convincingly render the most complex optical phenomena, Nancy Witt made a career exploiting her skill to pull viewers into impossible, parallel worlds in which the unconscious is set free. A serious student of Jungian psychology, she often “layered” scenery — as if, as one observer noted, curtains are drawn to expose something, which in turn peels back to expose something else.

In “Dahlias,” one of her most impressive accomplishments represented here, she not only paints multiple scenes, but also packs the picture plain with elaborate visual effects, including trompe l'oeil and convoluted reflected and refracted light.

Though Witt's paintings look painstakingly planned, she said they were products of her unconscious, realized as each painting progressed. But tension between her highly conscious painting style and the imagery she excavated from her unconscious sometimes makes for an uncomfortable spectacle. While encouraging imaginative wondering, her ultrafocused realism still cuts with its cold accuracy.

Often Witt could remedy this tension with small gestures. In “Collecting Shells” she enlivened a lifeless collection of shells and snapshots with an image of a red balloon, which seems to press against the picture plane with the help of a human hand. Just when you think she's painting to show off her prowess, she slips in some levity to change your mind.

Potter David Camden, the most experienced and accomplished artist of the siblings, contributes beautifully executed traditional porcelain and stoneware vessels, some made with Asian influences. His preference for subtle glaze and form irregularities starkly contrasts to the highly controlled canvases by his mother, as do the intimate black and white photographs by Jeremy Witt and paintings and assemblages by Brad Camden, which, though painted in neon colors, seem anemic in this setting.

If this exhibition doesn't flatter the art of her sons, it at least honors a woman who not only produced a remarkable body of paintings but also three offspring willing to brave the uncertain lives of artists. Now two years since their mother's death, they're working to further her legacy by promoting her work (several finished canvases have been recently discovered) and keeping Cross Mill Gallery, her Ashland home, studio and gallery for almost 40 years, in operation. S

The exhibit will run through March at the H. Scott November Gallery in Westminster Canterbury, 1600 Westbrook Ave. For information call 264-6256.