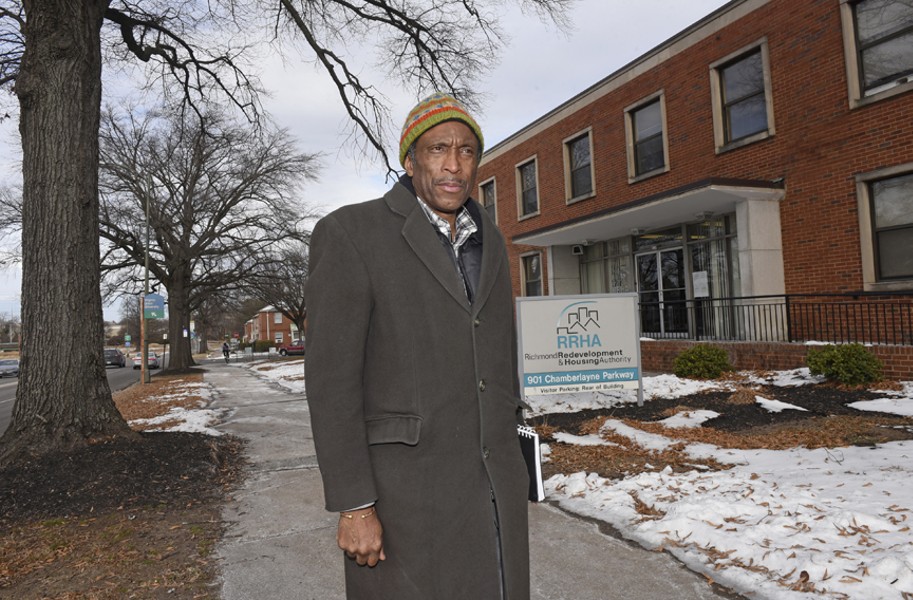 Scott Elmquist Community activist Art Burton, standing outside the RRHA headquarters in Gilpin Court, helped organize a rally in a show of solidarity for residents left without heat during the recent cold wave.

Arthur Burton is a lifelong social activist who's been fighting for the rights of poor black people since he was 8 years old, following his father to meetings and handing out flyers.

Now 58, he's the founder and director of Kinfolk Community Empowerment Center, a nonprofit that uses grass-roots efforts to empower low-income black neighborhoods. So when news broke that more than 50 residents of public housing community Creighton Court were without heat during last week's cold snap, he demanded that the Richmond Redevelopment and Housing Authority make some changes, starting with the resignation of its chief executive, T.K. Somanath.

Burton helped organize a solidarity rally outside the authority's office on Monday, and we sat down with him beforehand to talk about the issues —which he says are about much more than broken heaters.

Style Weekly: What led you to this kind of activism?

Burton: My dad came here as an activist in 1970. He worked with Curtis Holt, fought to get the first majority black council, worked in housing and economic development. Everything I do now is predicated on what I learned from my father and the men around him. In the 1960s and '70s in the city of Richmond, we didn't have black political officials.
Let's be clear about this, we are past the point where we can judge people's politics by the color of their skin. And our children do not live in a world like I lived in when everything was black and white. But white supremacy still operates in the city, and we have to have people who are dedicated to looking at policies and rooting out racism and sexism, wherever it is.

You're calling for new leadership of the housing authority. Why?

We've asked for new leadership in public housing that at the very least has a heart for the community and we're not backing down off of that demand.

There's a history of misappropriation and mismanagement, and a history of our political leadership using this as a financial pass-through for their own benefit. So we know of at least 15 years of misappropriation. T.K. didn't steal $6.5 million that was intended for the operation of public housing and give himself a raise — that was done prior to his arrival. But it was stolen. T.K. didn't make the decision to charge the residents excessive electrical charges, now there's a class-action lawsuit. But it was done. But T.K. didn't get rid of nobody, neither.

What are you looking for in RRHA leadership?

They need to understand that the community has been suffering. They have to come in with a commitment to producing the next generation of resident leaders in the community. I think they need to be open to working with the social-justice community on promoting a multitude of strategies that move us forward. I think they have to understand that transformation means changing what the economic face looks like. It can't just be white folk keep getting money. We've gotta change who gets the money, and we have to build businesses. They need to understand that there are things we need to do right now. All these 20-year plans, look, I'm 58 years old, don't bring me a 20-year plan. That don't mean it's not a good plan, but I just can't do a 20-year plan. I've been doing this 17 years already. Every mile has been a hard mile, every fight has been brutal, and it's taken years. It takes us seven years to change anything.

You talk about the connections between public housing and success in school.

There are a lot of cold black people in Richmond right now, because of the cost of gas. The suffering that poor black people are facing isn't confined to just public housing. When you are confined to a room with an electric heater and you wear two coats and the room that you're in is your bedroom, which means you're in the bed under three covers, you know, that's the restriction. I think that's really what so many of our young people and our children feel and face, that they are restricted and the walls are closing in on them. And whether that's in their homes or on the street, it is a constant battle to have a space. … That furthers this feeling of being isolated and uncared for and that's what you carry into the school system with you.

This is second-class citizenship and a continuation of white supremacy, basically. We're still there. This is a symbol of that. When we talk about symbols of race, we're not just talking about Lee's statue. We're talking about public education and public housing. These are social, cultural institutions. The heat is a symbol of where we are now, so when we say black people are being left out in the cold, they're being left out on every level. S