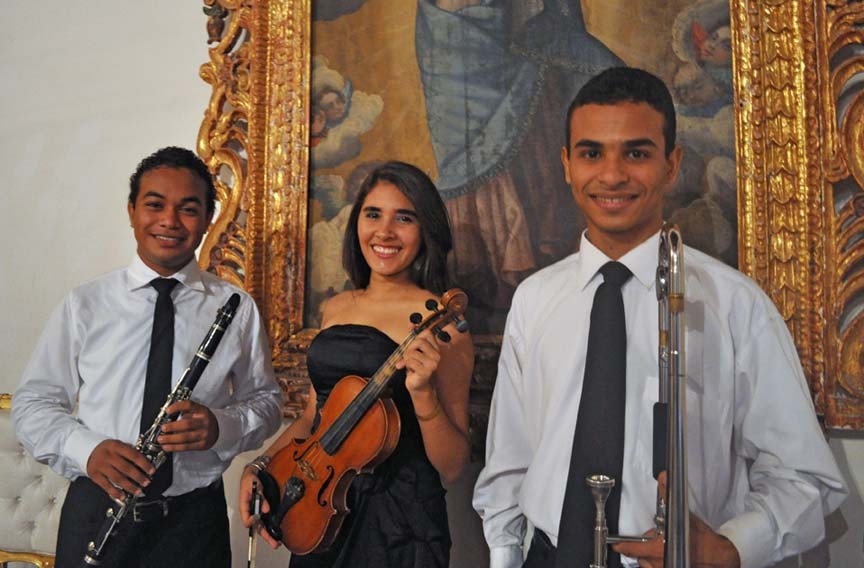 "Music is a venue for change," Colombian music teacher Jose Gregorio Quintero says. "It has the power to transform the environment into something positive."

Quintero hopes to see that transformation take place firsthand in Richmond this month when three recent graduates from the public high school where he teaches in Cartagena, Colombia, participate in a musical summer camp sponsored by Richmond-based Foundacion Tocando Puertas Para Abrir Futuros. In English, that means the Knocking on Doors to Open Futures Foundation, a nonprofit group founded by Evelia Gonzales Porto, a commissioner of the Virginia Commission for the Arts.

For the second time, Tocando Puertas has raised money to bring talented, underprivileged young musicians from Colombia to study in Richmond. The students — clarinetist Juan Camilo Gonzalez, 19, trombonist Cristian Puello, 18, and violinist Sandra Rendon, 17 — arrived in Richmond on June 22. On their first morning in the States, an anonymous local benefactor donated new instruments to all three students. "The place was full of tears," says Richard Hoskins, a foundation board member.

Tocando Puertas is helping "make dreams come true," Porto says. "How do you know we don't have in our hands a future Dudamel?" she asks, referring to Gustavo Dudamel, the famed Venezuelan conductor of the Los Angeles Philharmonic.

While here, the three students from Cartagena will receive music lessons from representatives of Virginia Commonwealth University, the University of Richmond and the Richmond Symphony. Their camp will conclude July 7, when the three will play a concert at the Virginia Center for Architecture with VCU's Park Avenue Brass quintet.

The Columbian students already are familiar with the VCU student quintet, having played with the musicians when the group traveled to Colombia in May as part of a musical exchange of the VCU School of the Arts, the university's music department and Tocando Puertas. While in Colombia, the quintet headlined a concert with Colombian youth orchestras at Cartagena's historic Teatro Adolfo Mejia and performed twice for the governor of the Colombian state of Bolivar.

"It was an amazing experience for me and my students to learn about Colombia and its musicians," music professor Ross Walter says. "Throughout our visit, the language barrier we faced was a challenge, but ... music truly was the universal language." While there, Walter taught a master class to university students and brought gifts of musical instruments from Richmond to programs for disadvantaged children in Cartagena.

Similarly, the Colombian students in Richmond also are getting opportunities to learn from leading members of the city's music community. Though he's here as a clarinetist, Gonzalez hopes ultimately to become a conductor, so he received some private pointers from Richmond Symphony conductor Steven Smith last week. Gonzalez recalls that his music teacher once was late showing up for class and asked him to conduct the school orchestra — he found a "big connection" with it, he says, and hopes one day to lead orchestras "all over the world."

Smith says he found Gonzalez to be "a very enthusiastic and energetic young man. From all accounts he has a natural talent for communicating with the players he has worked with thus far." Because it's difficult for talented students to pursue higher-level musical educations in Colombia, Smith says, the Tocando Puertas program offers "a great opportunity for them to come to Richmond to further their study, and to perhaps open new doors to their futures."

And the visiting young musicians enrich Richmond's musicians as well, he says. "As Richmond continues to increase its visibility as a place that brings together highly creative people," Smith says, "... the contact that other students have with these talented Colombian musicians will broaden their own horizons and bring the world a little closer to their lives." S

VCU's Park Avenue Brass Quintet will perform July 7 with students from Colombia at the Virginia Center for Architecture at 2501 Monument Ave. at 2 p.m. Free.