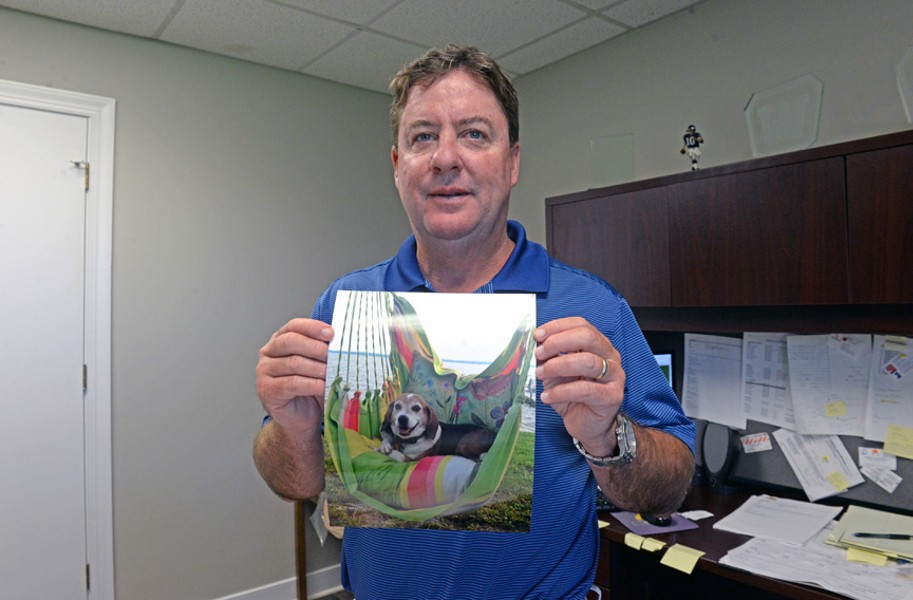 Scott Elmquist Frank Payne holds up a photo of his former therapy dog, Webster, a beagle that has inspired a children’s book.

Lost dogs can be skittish and standoffish. Not so much with Webster.

Frank Payne was deer hunting with the Waverly Youth Hunt Club when he took a break to sit down on a fallen tree. Within moments, a little beagle jumped up onto the tree and walked toward him "like an acrobat," he recalls, and began nuzzling for attention. Checking the dog's tag, Payne learned the dog's name, but also recognized the owner.

Scooping up the beagle, he visited the owner who told him that the dog had been lost for two days, no surprise since Webster was too small to keep up with the other hounds. Payne asked what it would take for him keep the 4-year-old dog and they settled on two bags of dog food.

"He was so sweet and friendly and everyone loved him," Payne says from his office as vice president of P.D. Brooks Traffic Control. "When people came to the house to stay, he'd sleep with them."

Webster's people skills and easy-going nature got Payne thinking that he'd probably make an excellent therapy dog and he was right. With little training, Webster became part of the Caring Canines program, visiting seniors and the Dogs on Call at Virginia Commonwealth University program, visiting sick children. He was a natural.

"Each visit was an hour and a half and Webster was exhausted afterward, but he loved the attention," Payne says. "I like to say that it wasn't my idea, it was Webster's idea. I just implemented it once I realized how special he was."

After years of providing therapy for others, Webster died in 2017. It was then that Payne was inspired to write a children's book about the little beagle.

"I'm not an author, but it was such a good story," he says. "I don't have kids, so I hadn't even read any children's books. The idea just came to me."

The result is "Webster, the Beagle," a book that tells the story of Webster's life beginning in 2005 when Payne found him. A co-worker recommended Mascot Books as a publisher and they in turn suggested Romney Vasquez to do the illustrations. Released in early August, the book's proceeds are being donated to VCU's Children's Hospital, Happe, a Richmond dog rescue group and Peaceful Passings Senior Animal Rescue, which takes in dying canines.

"I laid it out just the way it happened. He may have been the smallest, but he was the smartest hunting dog of all because he found his forever home," Payne insists.

He sees the book's message to children as important: "I was trying to say to kids to never give up hope. You may think you're lost, but you're not."

In an effort to further Webster's message, Payne has sent copies of the book to every beagle-loving celebrity he could find — Kristen Bell, Sandra Bullock, Kenny Chesney, Kelly Clarkson, George Clooney, Miranda Lambert, Barry Manilow and Blake Shelton among them — hoping their endorsement will help raise more funds for the three organizations Noncelebrities can pick up copies at Amazon, Barnes & Noble or Target and Walmart's online sites.

With no experience with children's books, much less writing, Payne has been surprised at how many people tell him they cried when they read it.

"The book came out way better than I expected," he says. "Webster will live forever now." S