A Chef Shuffle Is Coming to L'Opossum 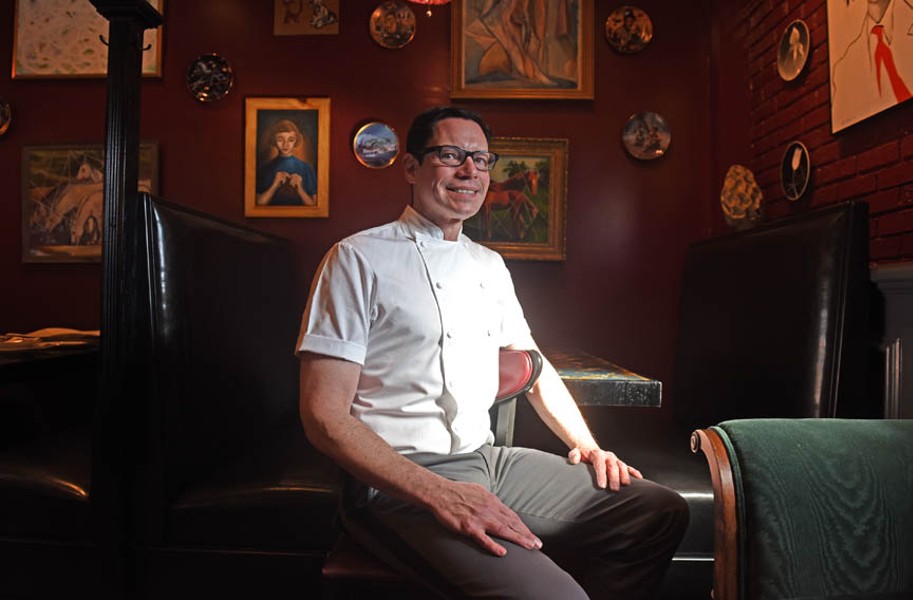 Scott Elmquist David Shannon has plans for a L’Opossum cookbook. And new chef de cuisine James Garland is in place to help Shannon free up some much needed time to work on it.

In the David Lynch-style snow globe of L’Opossum, there’s been a shake-up. Chef and owner David Shannon is taking a step back from the kitchen, and former sous chef James Garland is stepping into his shoes.

It’s a natural progression, Shannon says: “When I opened the restaurant, I wanted to get it to a point where it would be a great place to showcase really talented and skilled individuals — and let them get the recognition.”

Garland has been at the restaurant for the last couple of years as Shannon’s No. 2 and shares his boss’s vision. The menu at L’Opossum can be described as the love child of Southern and French cuisine, and after eight years at Can Can Brasserie early in his career, Garland has the technique to execute it.

“We have a lot of the same ideas,” Garland says. Often, the two will meet to discuss a new dish, he says, and they’ll discover they’ve arrived with the same ingredients already written down in their notes.

Shannon first took notice of Garland when his future chef de cuisine came in three nights in a row for dinner. Garland was working at Graffiato at the time.

“Finally,” Garland says, “I got to eat somewhere that I could relinquish control.” When chefs go out to eat, they typically pick dishes apart, critiquing them. “Every little thing — all my pet peeves in the cooking world — weren’t done [at L’Opossum],” he says.

There won’t be a dramatic overhaul of the menu. Standards — some dating from Shannon’s former restaurant, Dogwood Grille & Spirits — will stay put. But diners will find new things to try. “I don’t know if the menu will expand in size,” Shannon says, “but it may change a little bit faster to stay more seasonal.”

Shannon also wants to dig deeper into the wine and cocktail program — but more importantly, he needs extra time to work on a new project. A L’Opossum cookbook is in the works. “It’s a great time to codify the recipes,” Shannon says.

He owns the house next door to the restaurant and plans to do his testing there with the familiar equipment of a home kitchen. “Reducing recipes down to four [servings] to make at home,” he says, “often it’s the first thing that gets thrown out. Then the recipes don’t work.” Shannon wants his dishes to be duplicable and accessible.

But none of this means Shannon is leaving L’Opossum. You’ll still see him at the restaurant, but perhaps not every single night. “I’m still approving all of the food and menu,” he says. “I’ll have the say in the final editing.”