A Chef on the Rise 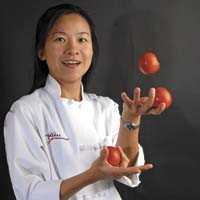 When Ellie Basch was in the sixth grade in Indonesia and needed money for school, she convinced her mother that local shop owners would rather have lunch delivered to them instead of eating out. After pounding the pavement all day, Basch had enough delivery orders (and a 50-cent deposit on each) to launch her mother's business. Basch then suggested she cater a cousin's wedding, and suddenly her mother was catering events for up to a thousand people.

The Breadwinners project at New Visions, New Ventures, a nonprofit promoting female entrepreneurship, was a natural fit for Basch. As a chef with her own catering business, Everyday Gourmet, she crafted a culinary program to teach low-income women in Richmond how to take their skills in the kitchen and reinvent them for the marketplace.

"Lots of the women have family recipes," Basch says, "but lots of changes need to be made to translate that recipe to a commercial recipe." Classes in basic business, financial literacy and hands-on food technique lay the groundwork, while offerings like the catering and box-lunch program Basch added in January give women a real taste of what it's like to run a food business every day.

Nonetheless, Basch now feels it's time to move on and let the program run under its own steam. She won't be gone entirely, though. Along with Justin French of French Consulting, Basch is planning to build a multiuse kitchen for the Breadwinners program in the old Philip Morris plant in Manchester as well as other commercial kitchen spaces that will be available to rent to small food businesses by next fall.

She and French also plan to open a coffeehouse/café in Manchester's Corrugated Box Building in November, and other restaurant concepts are in development for some of French's buildings and clients.

All of this comes fresh off the heels of her trip to Australia this summer as one of three American finalists in the 2007 Olivado Avocado Oil Chef Quest: Celebrating Women Chefs competition. She and her fellow chefs were wined, dined and whisked on a whirlwind tour of Brisbane and Sydney, but the event itself was "pretty nerve-racking. I don't like writing recipes. . . but I couldn't look like I didn't know what I was doing, so I started memorizing" the citrus salad ingredients and preparation in the too-short window between hearing the news she'd won and before leaving for Australia.

How did she manage to develop a winning recipe and enter the contest, along with all of her ventures? "My husband bugged me about it for weeks," Basch says, "and I had no excuse not to."