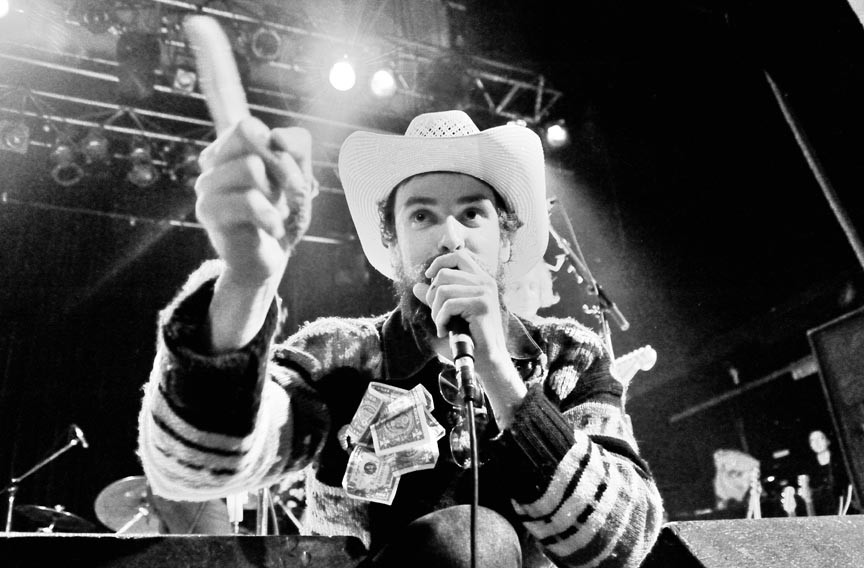 You might think a country singer who sports vintage belt buckles, rose-colored aviators and the occasional Bill Cosby sweater is not much more than a novelty act. Turns out the man known as Jonny Fritz, formerly Corndawg, is a bona fide craftsman of legit songs who vows "to take country back" and finally win over Richmond audiences. Style Weekly caught up with the native of Esmont, a short drive south of Charlottesville, before his show here backing legendary singer Wanda Jackson.

Style: You grew up in Virginia and still play Charlottesville fairly often, but we don't see you much around Richmond. Why is that?

Fritz: Richmond has been a tough one for me. I've been trying to break in there for a while, but it never seems to work. I used to play down there with Municipal Waste and a couple of others like Dirty Fingers and Hillbilly Werewolf. Nobody really got me or cared, but I don't blame them [laughs]. I wasn't very good back then. I've gotten better.

We have a thing for guys with beards, but from recent pictures it looks like you are clean-shaven. You may have screwed up your chances.

I had a little meltdown in Missoula, Mont. I got overwhelmed after an eight-hour drive there, and the thought of another long drive the next day was exhausting. I had one too many drunk kids come up to me at the show and it bummed me out. By the end, I just wanted to wash the whole experience off of me. So I shaved off the beard too. I slightly regret it.

And you've dropped the Corndawg moniker. What prompted that?

I've always had a bunch of nicknames, one being Corndawg. I never thought anything of it. After the last record, "Down on the Bikini Line," I started to get some press and ended up spending more time talking about my name than the music. Do you think 50 Cent would sit there and talk about it? No, he would just kick your ass. So I was like: "I'm done with it. Call me what you want, but I'm not calling myself Corndawg anymore."

You have an admitted penchant for "stupid little things." What are some of your favorite songs about them?

John Prine is my biggest influence. Him and Kinky Friedman. When I first heard those guys singing about simple, stupid stuff, it blew me away. One of the lines that made me realize I was sick of every other song I'd ever heard was, "Ain't it funny how an old broken bottle looks just like a diamond ring," from [Prine's] "Far From Me." I always wondered why more people didn't write those kinds of songs.

You call your music "Dad country." Talk to me about this genre.

It's definitely my own. My last record sounded more like '70s-style country, but a lot of people said it was outlaw country. I'm a real nerd. I don't really drink. I run marathons, like tea and reading. So I'm more like somebody's weird dad, not an outlaw. I'm into cowboy hats and tennis shoes, not beating people up.

The forthcoming album is entitled "Dad Country" as well. What can we expect when it comes out next year?

Taylor Goldsmith of Dawes is one of my best friends, so they're the backup band. I flew out to L.A. last December and we cut 14 songs in four days at Jackson Browne's studio. They're all my country songs, but with a real California vibe. It came out of our asses, but that gave it a real live feel.

You'll be opening for and backing the legendary Wanda Jackson on a handful of dates. She's a proper, God-loving lady. Has she heard any of your songs like "Silver Panty Liners"?

I'm sure she hasn't. But have you heard "Fujiyama Mama"? Woo. It's pretty hardcore. Dropping atomic bombs. Holy shit, Wanda! It's cool when you can see someone who hasn't lost their integrity and has stuck with the same kind of music over the years. Wanda Jackson is like a history book. It's the coolest thing.

What do you think she'll say about Jonny Fritz after the first show?

I always offend older folks, it never fails — and even though I don't want to. Actually, she's probably just gonna hate me. If she actually ends up giving me a listen, I'm pretty sure she's gonna say, "What the fuck did he just say?" S

Jonny Fritz performs with Wanda Jackson on Wednesday, Dec. 12, at 8 p.m., at Capital Ale House downtown, 623 E. Main St. Tickets are $20 in advance and $25 at the door. For information go to capitalalehouse.com.