A Case of the Kinks

Food Review: Graffiato gets in the way of what could be great. 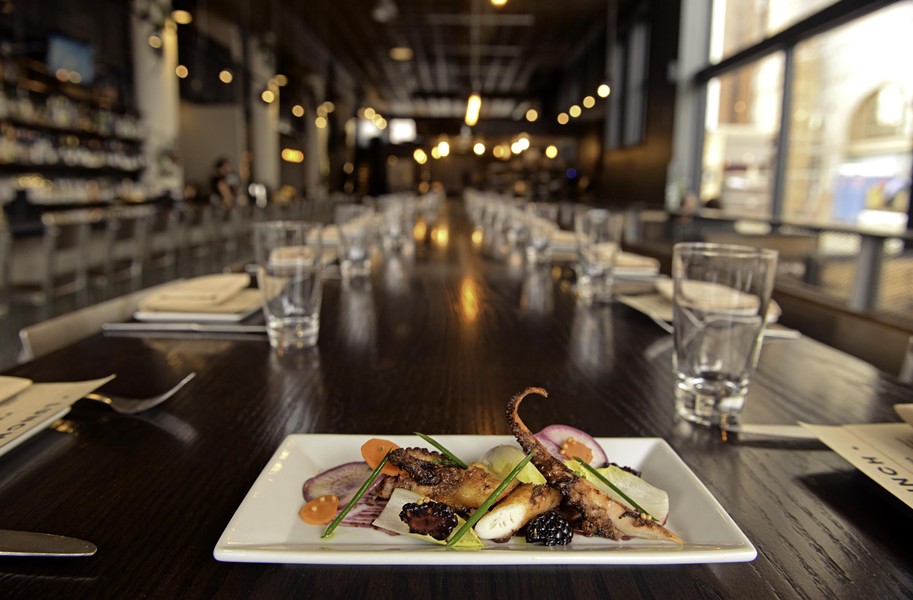 Boy, was I excited for Graffiato’s move to Richmond — and I don’t even care much for the celebrity-chef movement. But I always had excellent, thoughtful food at the Washington flagship, and, of course, there was prosecco on tap when no one else was doing it.

Alas, Mike Isabella’s glittery Richmond incarnation in the former Popkin Tavern space is wrestling with a case of the kinks, which is a shame. It clearly wants to anchor the corner of Jefferson and West Broad streets for this emerging strip of businesses.

While the good folks at Graffiato wouldn’t be responsible for bringing Broad Street back, their massive presence cements the idea that something definitely is happening here. It just might take a little longer before we get to see how great this particular place can be.

My issues are 89 percent service and ambiance. The staff members are green, smiling and eager, but lacking menu and institutional knowledge. And there are too many of them. At least five people attend to my table, taking orders, swooping in with food and clearing plates. One confused-looking soul tries to take my plate while I’m eating from it.

The blaring ’90s music strains conversation, dim lighting at some tables has us relying on streetlights outside, and a full 15-minute wait before we’re greeted by a server after being seated one evening is ridiculous. But it’s worth looking past these problems to get to the food.

Isabella’s thing is rustic, Italian-style fare inspired by his childhood in New Jersey. Pasta and pizza reign, naturally, and when the dishes are done right, they’re tremendous.

I don’t know what it means when cauliflower ($7) is one of the best things on the menu, but this roasted version comes out browned, buttery and bright with lemon and mint. Brussels sprouts ($8) are similarly satisfying, charred in a maple glaze and sprinkled with chopped egg and pancetta. The charred octopus plate ($14) is surprisingly small, but the combination of mollusk, bitter endive and sweet blackberry sauce is unusual and precise.

Missteps include broccolini ($6), which looks pretty dressed in red-pepper sauce, but would be better served warm. And eggplant caponata ($7), which comes out within 30 seconds of ordering, tastes like it was scooped from a vat prepared hours before.

The pasta clearly is house-made, and there are few places that prepare it so well. The way your teeth slice through noodles cooked exactly al dente is magical, and the bucatini carbonara ($10) is a happy example. In fact, the whole dish is perfect in terms of texture and proportion of pasta to peas to pork bits, and it becomes opulent when I unleash the yolk from the egg served on top.

For other dishes, the parts of the whole are really good, but the combinations don’t always work. Take the potato gnocchi ($11). The tender dumplings seem to be made with loving hands, but drown in shredded pork ragout. The Amish chicken thigh ($10) has a welcome gamey tang, though the smoky pepperoni sauce lacks flair, and what is meant to be braised escarole seems to be damp spinach.

I don’t usually bother with salad, but smoked burrata ($12) with pear and arugula calls. It should be refreshing and light, but the arugula is on its last legs, and it’s as if someone put every single unchopped walnut available on this plate. Lack of proportion randomly drags down other menu items. Instead of scoops and dumps, dishes need dashes and sprinkles.

I’ve struggled with pizza in Richmond, but as soon as Graffiato’s kitchen gets the hang of the crust, I’ll be set. Of the four pies I try, one passes the test. Crusts range from jaw-achingly chewy to crunchy breadstick — and one has us sawing with a butter knife to slice it. The fourth (American pie, $12) is the charm: It holds up all the way to the center, and the crispy outer crust has the appropriate pops of charred dough and soft interior.

Desserts aren’t the main attraction, but I would order the zeppole ($6) again just for its grape-lollipop jelly accompaniment. It’s lush, like creamed honey, and should be bottled and sold. The tiramisu ($7) is an interesting deconstruction with silky mascarpone cheese lavished over cocoa nibs and speared with broken pieces of coffee meringue. It won’t fit the bill if you’re looking for traditional, but I appreciate the innovation.

There’s a lot of good. And perhaps if there were no “Top Chef” and “Top Chef All-Stars” accolades and a sister restaurant for comparison, the complaints I have wouldn’t matter as much. We wouldn’t know how good Graffiato could be. But we do. Hopefully, it’s only a matter of time until the restaurant here finds its cadence. S