A Brookland Park Bank Renovation Seeks a Grant Extension, but Some Neighbors are Wary 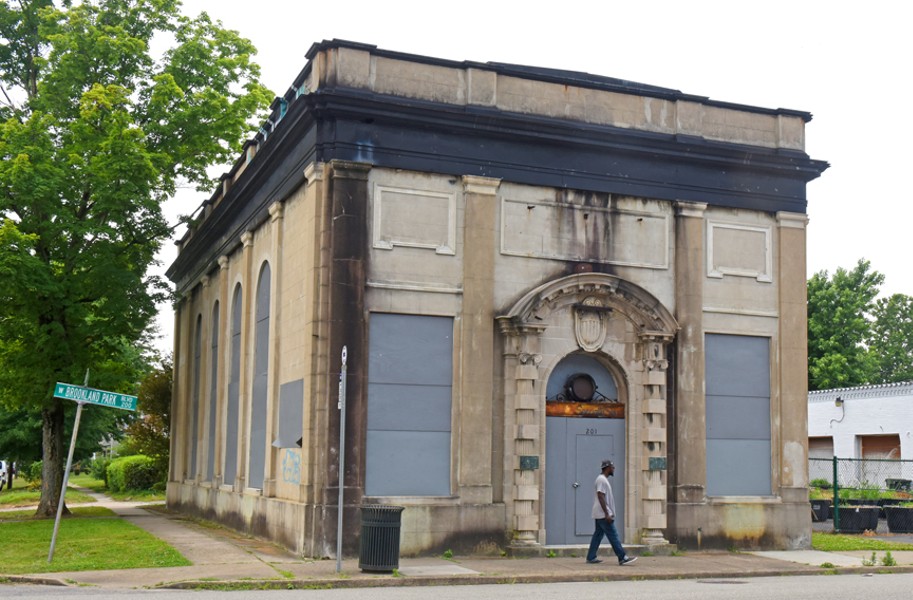 Scott Elmquist With Brookland Park Boulevard on the rise, some neighbors wonder about projects like the historic bank at Hanes Avenue, which received a $200,000 grant from the city in 2015 and has missed two rounds of deadlines since.

A neighborhood on the rise has a few anchors holding it down, say some residents. And a $200,000 grant from the city has yet to yield returns.

Third District Councilman Chris Hilbert says he will ask for a final extension for a city grant to LaMar E. Dixon of Dixon/Lee Development Group, a limited liability company, for the rehabilitation of 201 W. Brookland Park Blvd.

One of the neighborhood’s most visible buildings, the former American Bank & Trust Co., was built in 1927 and sits boarded up at Hanes Avenue. Dixon bought the property from the Richmond Redevelopment and Housing Authority for $20,000 in May 2015, according to city records.

A month later, Mayor Dwight Jones and Hilbert introduced a proposal to give the group $200,000 for rehabilitation of the structure into a mixed-use development. The ordinance said the project would create at least 15 part-time jobs and 15 full-time jobs paying $11.33 an hour.

In February 2016, another ordinance updated the terms of the agreement, extending a missed deadline for construction completion to March of this year. The jobs would come by November.

Dixon downplays the construction deadline and focuses on the work that he says he’s done to secure tenants and build long-term jobs. “For me, it’s been a lot of work behind the scenes to bring something different and transformational over there,” he says.

The construction project, Dixon says, would not take that long — about 90-100 days to fill the shell. The plan is for commercial space on the first floor and two apartments upstairs.

“We’re behind schedule with construction, but not with the business development part,” he says. “We’ve seen projects throw construction up and then they fail.”

Dixon says a juice bar and a commercial kitchen plan to move into the downstairs space, but wasn’t ready to name them because they’re startups.

Bill Gayles and Renee Murray can see the bank from Murray’s porch on Hanes Avenue. Both say they’ve seen the grass cut and the building has been power washed. But mostly, they say, they see kids tagging it with graffiti and trying to climb the ladder to the roof. Murray and Gayles were surprised to hear of a city grant.

Hilbert says he has confidence in Dixon’s plans.

But neighbors are wary. Streetcar Café — a combination coffee and bike shop — closed after a few months of operation in 2015. The project was part of a plan by Nehemiah Community Development Corp. that received $120,000 from the city.

To Hilbert, the failure of that project is what makes Dixon’s model of focusing on the end appropriate. And he credits the city-funded projects, Nehemiah’s and Dixon’s, as fueling private and nonprofit development that the Brookland Park corridor has seen in recent years.

Dixon says the project will cost around $600,000, and he is responsible for $400,000 of it. “It angers me that, guess what, the city’s investment is the smaller part,” he says when asked about the grant. “This is going to have a significant amount of personal investment.”

Stalled development is a perennial problem on Brookland Park Boulevard. “That’s one of the issues we face,” says Leroy Jefferson, who lives a block away and works for civic engagement nonprofit Embrace Richmond. “People coming in, buying properties, holding on to them and waiting for the value to go up,” he says.

He mentions the art deco Brookland Theater on the next block over as an additional building that languishes. A limited liability company, Hampton Nash, purchased that property last year for $106,000, roughly its assessed value, but nothing has happened.