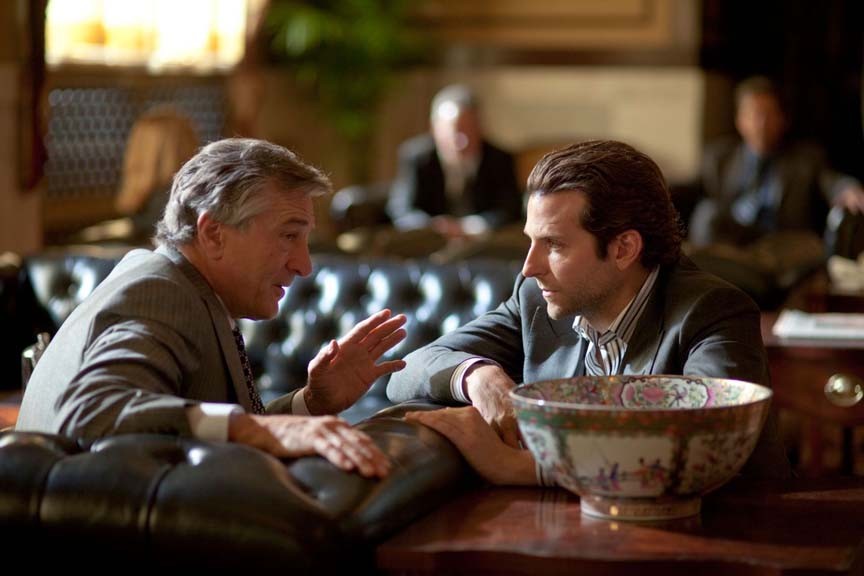 The guy is Eddie (Bradley Cooper), a failed New York writer who obtains a sample of super pills, called NZT, from his former brother-in-law (Johnny Whitworth). It's a dubious sign when a plot is kick-started by a random encounter with a former brother-in-law. The important thing, however, is that Eddie obtains a big stash to get things going, though not a clue where it's leading — even if everyone in the audience will be able to guess. With his pills, Eddie thinks "50 moves ahead," he says. Fifty moves, wow. Then why can't he navigate the formulaic maze of a standard thriller?

Of course Eddie is just a plucky character in a cool movie. He can't help it if his exploits are carefully set up to prove how smart he is, but also carefully vague so as to not be too complicated while they propel him into the movie shorthand of success. Eddie can see the big picture now, he tells us. He finishes his novel and plops it down in front of his editor, but decides he really wants "Something much bigger than that." To end world hunger, no doubt. Just kidding.

Eddie wants to get laid. So he masters Italian and other languages. He games the stock market. He cleans his apartment. He does all this so he can charm the underpants off beautiful women at parties. You can't blame him, but anyone who wants to know the full details can avoid the ticket price by thumbing through the pages of a recent men's magazine. Yes, Eddie hammers out that pesky novel, but that's quickly forgotten. More importantly, he gets a pricey haircut, some stylish threads, becomes the life of the party and is invited to a fancy beach house infested with models. His life has fused with an issue of GQ, what all the smart people read.

Of course if one is going to craft a life like an episode of "Entourage," it can't stay awesome without some dilemmas. Rough-looking characters are always following Eddie around. He gets mixed up with a feisty übercapitalist (Robert De Niro), a Russian gangster and a party girl who turns up dead after they go back to her room. Only problem is, we can't figure out why any of this matters. Eddie's so dang smart, but he can't even think to get rid of his old apartment until the movie is almost over. Luckily his adversaries can't think to find him there, either. They must not be taking their NZT!

You may be shocked to learn that Eddie isn't the only one popping those pills. Or that his rivalry with some competitors lands him and his girlfriend (Abbie Cornish) in hot water. Eddie advises her via cell phone to take one of the pills to "think her way out" of a close encounter with a goon. Her newly acquired mental powers scan the horizon and decide, of all available weapons, the little girl wearing ice skates is the best idea. Sometimes "Limitless" just comes at you — wham! — out of nowhere.

Usually, however, it comes at you like a movie directed by a guy — Neil Burger — with a lot more enthusiasm than sense. The movie's style alternately suggests "Fight Club" and anti-depressant ads. To show the pills' transformative effect, gray days turn springlike, flooded by saturated colors and far-off gazes of people who look like they smell something good cooking. Eddie provides occasional voiceover a la Edward Norton in "Fight Club" ("I was blind and now I see"), and the camera darts around inside his brain from time to time, but the devices aren't quite as profound or revelatory this time around.

Eddie can't even come up with a list of rules for his pill club, let alone a good hiding place for his drugs. A secret pocket in your jacket? Get real. Your average stoner could find that. On second thought, comparing "Limitless" with "Phenomenon" isn't really fair. The earlier film was shamelessly sentimental, and starred Travolta, but it was way smarter. (PG-13) 105 min. S