How Bron Got to Bloom 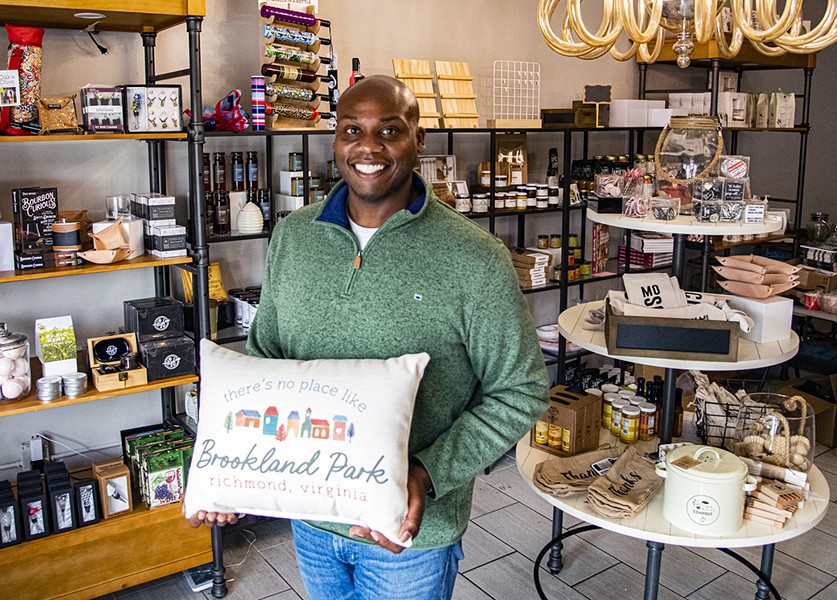 Bron Hansboro got his first feel of working with fresh flowers while gigging for a catering company to pay his way through Howard University. The Richmond native got his degree in sociology and a central office job helping kids with disabilities at Richmond Public Schools, but the desire to make flowers his full-time career never left him.

“I realized that my creativity wasn’t being served at RPS,” explains Hansboro. “I never saw flowers as a sustainable career for me, but I knew I wanted to make them a part of my everyday. I was just interested in a gracious lifestyle.”

Hansboro turned his passion for petals into a side hustle in 2014 when he launched a weddings and events business as well as his popular Instagram account: the Flower Guy Bron. A year later he opened a small shop at Main Street and 10th downtown while still holding down his full-time teaching job with RPS. “It was grueling, but I had a vision and knew I had to put in that level of work to get where I wanted to be,” says Hansboro.

The Flower Guy Bron concept moved into a brick-and-mortar on Brookland Park Boulevard in 2018 as a staging site for all of Hansboro’s weddings work. To accommodate his booming business, however, this January the man behind the brand moved his events operations to a bigger building on Chamberlayne Avenue.

“Really we had already outgrown the [Brookland Park Boulevard] building once we acquired it, but I love the neighborhood and knew that location would have another purpose,” Hansboro says. That purpose is a soon-to-be neighborhood florist, branded Brookland Park Flowers. With the zoning approved and a final inspection later this week, Hansboro hopes to open his doors to the public before Easter.

Half of his merchandise will, of course, be flowers — a variety of perennials and annuals for people who prefer to plant, mixed bouquets so folks can grab and do the arranging themselves, and fresh cut flowers predesigned in vases. The rest of his stock will be goods to create the “gracious lifestyle” Hansboro so prizes: smocks, pots, tools, dish soaps, countertop compost bins, charcuterie boards, marmalades, honey, and kits to grow herbs and botanicals to suit any recipe or cocktail.

Recognizing Northside as a neighborhood in transition, Brookland Park Flowers will also offer a more affordable array of arrangements, dubbed pastel posies. “We want people to be able to access us for everyday events and not just for fancy occasions,” adds Hansboro.

His dedication to the Brookland Park community has also sent Hansboro and his husband house-hunting in the area. The duo decided to name the shop after the business district to show respect for the legacy minority-owned businesses that kept the corridor going despite the disinvestment Northside has long faced. “It’s incredibly important to me that I call out that I am standing on the shoulders of the historic businesses that have occupied Brookland Park Boulevard,” Hansboro says. “It’s important that the neighborhood knows that I am as invested in it as they are in me.”

In his own way, Hansboro is also something of a pioneer. Straight white women dominate the wedding industry, making a Black gay man in that space a bit of an anomaly. Being an entrepreneur who owns his own floral and retail business is even rarer in the field.

Hansboro’s success is a testament to his approach to flowers. His top trademark is his deft deployment of texture and depth. A bouquet from the Flower Guy Bron is likely to explore bright color palettes, leverage layers of differing textures, and show off his modern take on traditional floristry. “You’ll always see elements you recognize and have appreciated but perhaps with a different medium or texture to bring it to life for a new age,” says Hansboro.

Although many florists profess their love to peonies and ranunculus, Hansboro favors the classic rose. The flower’s varying petal counts and wide array of nuanced hues allows him to mix and match varieties to the point where many people wouldn’t believe the entire arrangement is made of roses. “I'm a sucker for roses because roses can catch people off guard,” Hansboro explains.

The Flower Guy Bron is full of such surprises — Hansboro is actually allergic to the flowers he’s dedicated his life to.