Rising local vocalist and actress Jessi Johnson talks about her role as Glinda in “The Wiz” and the importance of her family. 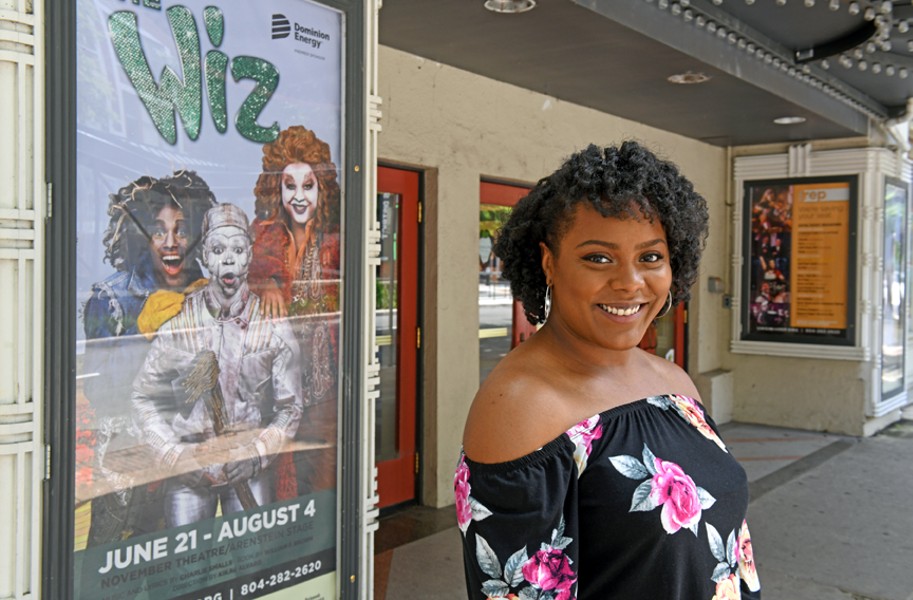 Jessi Johnson remembers sitting in front of the TV as a child, watching Lena Horne with stars in her hair and a shiny witch's robe in "The Wiz," exhorting Diana Ross to "Believe in yourself as I believe in you!"

Since 2011, Johnson has performed in more than 40 plays and musicals in Richmond, taking on such diverse roles as Maggie L. Walker, Bart Simpson and a maid of honor who is also the bride's lover.

But playing Glinda, the good witch of the South, in Virginia Repertory Theatre's production of "The Wiz" holds a special place in the heart of the 30-year-old singer and actress from Hanover County, who considers Horne "the epitome of grace and class."

But Johnson has her own take on Glinda, who is definitely cooler than her "Wizard of Oz" counterpart and has meatier vocal parts.

"I've done a lot of thinking about that," she says. Glinda is "an energy worker. She is using her capabilities for good. She's about warmth and comfort, tranquility and safety."

That warmth comes through when Johnson sings Glinda's two big numbers, "Believing" and "A Rested Body," in her rich, swooping voice and then gives Dorothy a full body hug on stage.

Kikei Alvaro, the director of "The Wiz," sought out Johnson for the role and cast her in other minor parts, including as a pit singer and one of the Wicked Witch's Winkies. "It's just when the right person is meant for the role," says Alvaro, who has worked with Johnson before. "She just emanates grace. You'll see it when she sings the songs."

Virginia Rep's version of "The Wiz," running through Aug. 4, is centered around three women with big voices —Johnson, newcomer Mariah Lyttle, who plays Dorothy, and Desiree Roots, the acclaimed singer and actress who plays the Wicked Witch of the West, Addaperle and Auntie Em. They're accompanied by a troupe of energetic dancers, singers and actors who portray the Tin Man, the Scarecrow, the Lion and other roles, with Jerold Solomon rounding out the cast as Uncle Henry and the Wiz.

As a child, Johnson says she was a bit rambunctious and was nicknamed Ace at home, where she was her father's No. 1 helper. In high school, she played alto saxophone in the pep band and participated in drama and chorus, but she didn't get many important roles, until she was tapped to play Mrs. March, the mother in "Little Women."

Meanwhile, she and her sister, Richmond writer Samantha Willis, grew up singing at Mount Carmel Baptist Church in Noel, "a very rural, very country place" in Hanover County, where their grandmother was music minister and organist. Johnson remains very close to her family today and calls it "the most important thing to me on the planet."

Her grandmother, Ella C. Johnson, who sang with the Echoes, a group she founded, "set the foundation of our music," Johnson says. She developed a love for all kinds of music, from Alice in Chains to Ray Charles to the indie band Chromeo, and despite numerous roles in nonmusical plays, Johnson describes herself as first and foremost a vocalist.

She also is a busy woman, with a full-time job at Costen Floors and wedding plans in October to Aaron Peterson, a U.S. Postal Service employee. The couple, who dated in middle school, reconnected four years ago and live with their two dogs, Zeke and Gypsy, in Lakeside. Johnson spends many nights at rehearsal or on stage, and often is preparing for two plays at once.

The decision to try out for roles in Richmond's community theaters — including TheatreLab and the Richmond Triangle Players — came after she graduated from Longwood University and was working full-time without an artistic outlet.

Over the past eight years, after her first professional role as a cow in Theatre IV's "The Little Red Hen," Johnson has taken on leading roles and received praise from critics and colleagues.

A high point was portraying Maggie L. Walker in 2015 for Virginia Rep's Children's Theatre, she says. To prepare for the role, Johnson took several free tours of Walker's home in Jackson Ward, learning more about the pioneering black businesswoman and journalist. Her director gave her one piece of advice that was helpful in becoming Walker, Johnson says: "Keep your chin up. She was very focused and determined." 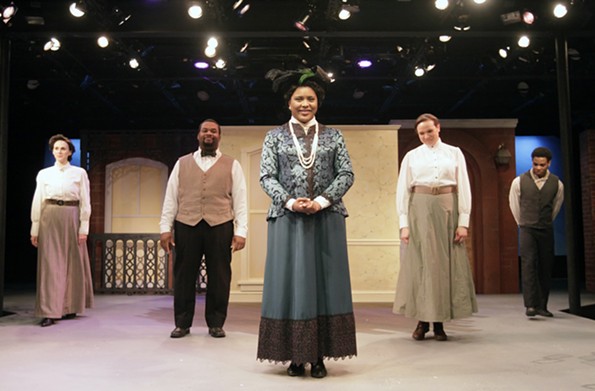 And in 2016, she won a Richmond Theatre Critics Circle's Artsie award for best supporting actress in a play, for Bart Simpson in TheatreLab's "Mr. Burns: a Post-Electric Play."

"It was really tough, but it was so worth it," Johnson says. The perpetual 10-year-old cartoon bad boy, for one thing, is "such an iconic character," but also, she admits with a smile, "Growing up, we weren't actually allowed to watch 'The Simpsons.' Bart was disrespectful."

In deciding to take the leap to professional theater, Johnson says, "I think the hardest decision was being true to myself. This is something I want to pursue. If I don't pursue it now, I'll regret it."

Jessi Johnson plays Glinda the Good Witch in "The Wiz" at Virginia Repertory's November Theatre through Aug. 4. For tickets and information, visit va-rep.org.