For those who fondly remember Best Friends Day, now there’s a yearbook of wild photographic memories. 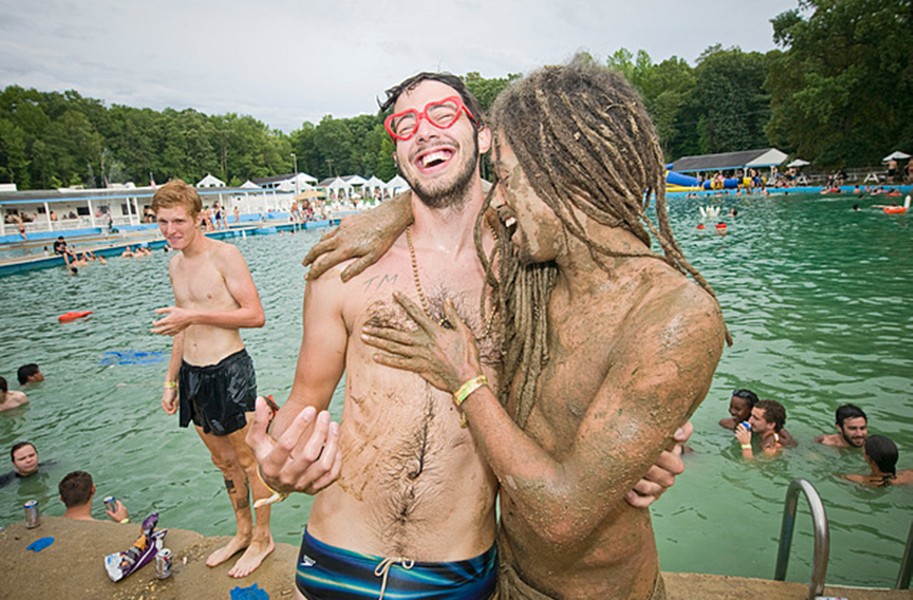 Had you been at the Fine Foods show that kicked off the Saturday of the final Best Friends weekend, you would have been surrounded by people wearing T-shirts reading “American by birth, hardcore by choice,” “Dead since 1991” and “Cloak and Dagger.”

You’d also have heard a loud, fast and short set by Night Birds, a punk band that thrashed hard for about half an hour in the parking lot before people began climbing aboard the To the Bottom and Back buses to head out to Hadad’s for a day of fun in the pool and sunshine.

Best Friends Day, a weekend event held in Richmond near summer’s end from 2001 through 2011, began as a small get-together of 40 people at Hadad’s Lake in Varina. Over the years, it morphed into a four-day-long music fest that brought in bands and fans from all over the world. By its final year, it attracted 6,000 people to venues across the city.

For many past attendees, the event is still considered to be one of the weirdest and wildest Richmond has ever produced.

Conceived of during the summer of 2001 by Anna Virginia and Shelley Callahan, the event was their way of commemorating the end of summer by gathering friends together.

“[Virginia] had been to Hadad’s Lake for the first time earlier that summer and suggested that it would be the perfect place to host our party,” Callahan recalls. “We had so much fun that the next year, Anna suggested we do it again and add a show at a local bowling alley. From there, it just took over each year.”

Within a decade, it had gotten so big that to continue to hold the event at Hadad’s Lake, additional security and permitting from the county would have been required.

“We knew that if we changed how we did things to be allowed to have it at that scale, it wouldn’t be the same event anymore,” Callahan explains. “As organizers, we wanted to quit while we were ahead, and 10 years was a good run. We’d rather have the good memories than watch Best Friends Day change into something we didn’t really have control over anymore.”

It was the pandemic that got Virginia, Callahan and her sister Erin Briggs thinking about those memories. During weekly Zoom calls to stay connected, the three realized that 2021 was 10 years since the last Best Friends Day and 20 years since the first one. They decided it would be fun to spend quarantine time archiving old pictures and art from the event.

“It started with just the three of us collecting and organizing photos, then we started asking close friends for more and found that people were really willing to dig through old hard drives to send in pictures and that was so exciting,” Callahan says.

Soon she was reaching out to people she didn’t know to ask for photos.

“It just ballooned until I thought that this should be a book that comes out for the 10-year anniversary.” They decided to call it the Best Friends Day Yearbook, riffing on how the theme for the final party in 2011 had been “the graduation,” a sendoff given so that they’d never hold the event again.

Choosing which photographs to include was based on the quality for printing as well as the diversity of events showing the wildness of Best Friends Day.

“Remember, this was a long time ago, so no one had cell phones and as organizers, we never asked anyone to take pictures because we didn’t think about what a special event it was at the time, we were just trying to have fun,” Callahan says. “We also wanted to show as much of the amazing art and merch created during that time so anyone who never got to Best Friends Day could see the yearbook and really see what an amazing event it was.”

The official Best Friends Day Yearbook release takes place at Tiny Space in Church Hill on June 25 all day with a special outdoor movie showing at 8:30 p.m. For those who can't attend, the yearbook, along with commemorative T-shirts, koozies and prints – made by artists who’d made event art for merch and posters in the past, will be available online at the website.

As for its legacy, Callahan sees it as about having fun with old friends and making new ones. “It really was all about hugs and high-fives and just having a blast to celebrate the best of what Richmond has to offer. Really highlighting why our city is so great.”