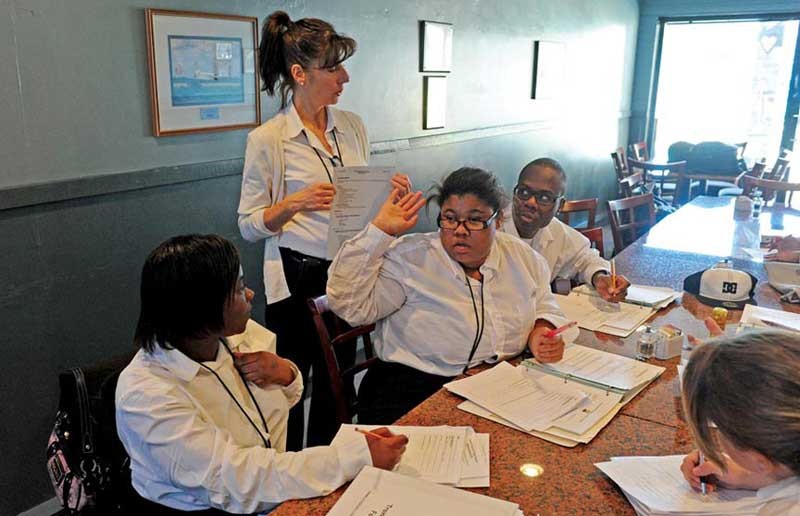 Seven students giggle while they practice shaking hands. They debate proper job interview attire: Tie? No tie? Black dress shoes? Red? One student asks what you should do if the person you’re meeting is a stranger. “It depends on the stranger,” instructor Kathy Schuler says. “If it’s a job interview, it’s a stranger — but it’s a stranger we want to meet.”

The working world’s not always a welcoming place. It’s especially daunting for the students in this room, all young adults with cognitive disabilities. That’s why Garth Larcen and his son, Max, started the Positive Vibe job-training program in 2003. The concept was simple: Give people with disabilities a better chance to find employment by providing real-world training in the Positive Vibe Café, the Larcens’ restaurant in the Stratford Hills Shopping Center.

Larcen expected that maybe 10 people at most would undergo the training program each year. He was way off. On Friday, Nov. 18, the 500th graduate will be honored in a ceremony at the cafe.

Most students are age 18 to 23, with cognitive or physical disabilities, who come from Richmond and Henrico and Chesterfield counties. It costs $3,800 to train one student for four weeks, money the Positive Vibe Foundation raises through donations. They learn job skills, food safety standards and basic cooking. A simultaneous internship in the restaurant prepares them to serve customers, wash dishes and bus tables in a stressful environment.

After passing a written and practical exam, graduates apply to local businesses, including Willow Oaks Country Club and Martin’s. One man is — very happily, Larcen says — employed at Hooters. The training can’t guarantee job placement. “We simply want to make it more difficult for employers to say no,” Larcen says.

The national unemployment rate for people with disabilities was 13.2 percent in October, according to the U.S. Department of Labor. It’s not just the economy that makes it difficult, says Judy Averill, lead transition coordinator for Chesterfield County Public Schools. “What we have noticed over the last 10 to 15 years is the jobs are changing,” she says.

Entry-level jobs have become more complicated. Instead of collecting carts by hand, for instance, employees at some stores are now required to operate mechanical cart collectors. Instead of bagging groceries for a shift, grocery store workers also must learn to use the cash register. “Well, a lot of our kids can’t do that,” Averill says.

At the same time, employers have become increasingly willing to hire people with disabilities, Averill says. Applicants just need to demonstrate that they have the necessary skills: “They need an edge.”