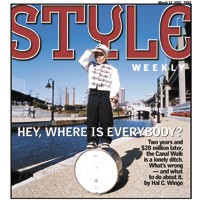 1. Reviving downtown. Turns out we had it all wrong. Toss a few multimillion-dollar projects onto Broad Street and listen for a giant flushing sound: A festival marketplace to revive a dying retail corridor? Torn down. A grand new convention center? It hosts weekend volleyball games and fails to attract enough out-of-town conventioneers. A new canal walk? Still sparse most weekends. A performing arts center complex? It leads to the demolition of the Thalhimers department store building, which is filled in with dirt.

Ever since Miller & Rhoads and Thalhimers left Broad Street in the early 1990s, we've pushed one big scheme after another to no avail. For some reason, we kept thinking people who left the city for the suburbs could be lured back. Turns out we were wrong, really wrong. Meanwhile, what is working nets little recognition.

The First Fridays art walk on East Broad brings thousands to the center city every month (and it wasn't concocted by city planners). The condo boom has led to a mini-resurgence of people actually living downtown, in turn attracting a restaurant surge. The National Folk Festival does something similar. And privately run performance venues are just warming up. For the most part, Richmond still shuts down after dark and on weekends. But that will change, if the city nurtures the increasing residential atmosphere.

2. Building a new baseball stadium. Old Parker Field is still being debated, and new ballparks have been proposed on Mayo Island, next to the Federal Reserve Building, in Shockoe Bottom and even at the old Fulton Gas Works. Those plans dissipated, and now the focus has returned to its rightful place -- the Boulevard.

Who knows if the current proposal to build a new ballpark next to The Diamond will ever come to fruition — paying millions to keep a minor league baseball team in town is still hotly debated — but at least they got the location right. The city has so many financial needs, and a new ballpark hardly seems a priority. At $30 million plus, a facility that's open 72 nights a year may not exactly be a catalyst for economic development. But the best thing is, we're learning that honest debate doesn't have to be considered un-Richmond-like.

3. Electing our mayors. Yikes! We'd been asking for a switch to a popularly elected mayor for years. We finally got it, and now look. Mayor L. Douglas Wilder, ushered into office with all the fanfare of a Super Bowl victory, is a strong mayor on steroids, and some people are questioning what the hell we were thinking.

We had so much fluctuation under the old city manager system with strongman Bob Bobb and nice guy Calvin Jamison. Each had his faults (we won't mention that Bobb recommended Harry Black to Wilder), but under the new city charter Richmond has lately been teetering on the verge of a constitutional crisis.

If Wilder is pushing everyone to reconsider the switch, his superpowers have forced both City Council and the School Board to bone up — a good thing — and chances are the next elected mayor will likely settle things down a bit. Trash is still getting picked up, and the school buses haven't stopped running — not yet at least. Meanwhile, former weak mayor Tim Kaine sits in the Executive Mansion across the street from City Hall. Yes, it was Kaine who bailed out Wilder recently and sent over Sheila Hill-Christian. There's hope after all.

4. VCU's rabid growth. The hip, artist crowd hates the long tentacles of Virginia Commonwealth University. They kept them out of Oregon Hill — for a few years at least — and howled at the commercialization of West Broad Street when VCU President Eugene Trani grew the campus north instead. The MCV campus cramped the White House of the Confederacy and now it's leaving town. Good riddance. Hate the Kroger and Five Guys Burgers and Fries franchise mentality? They're proven commodities, and they send the message to other national retailers that Richmond's a safe investment. They also pad the resume for locally owned ventures — the bank will approve that loan a whole lot faster if they're around. So stop whining.