A jaw-dropping stunner brought back to life

Scott Elmquist The foyer at 2710 Monument Ave. features decades-old wood brought back to life after years of vacancy. The current owners are seasoned renovators.

Inside their historic 2710 Monument Ave. house, I laugh alongside Paul and Julie Weissend as I squint my eyes in the direction of the massive quartzite kitchen backsplash — trying to find an abstract alligator. 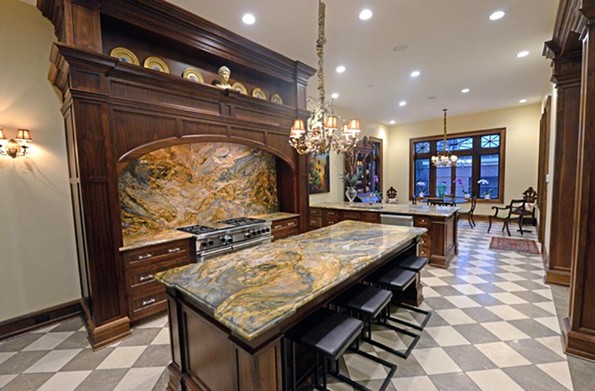 It takes me a few seconds, but they assure me that guests usually have better luck after a few drinks. It is the first of several times when I have to remind myself that I've just met the Weissends, even though it feels like we're longtime friends.

Inside the 10,000-square-foot house, it feels like a home in every sense, and not just because of the welcoming hosts. Thick, decades-old, dark-stained wood throughout gives the house a strong core and a feeling of deep-rooted history — even permanency — while bright artwork, pops of color, several fireplaces, and a plethora of comfortable seats make it welcoming.

The Weissends maintained much of the home's rich history, which dates back to 1914, though they worked to give it a more modern and comfortable appeal, making it a fun place for a family.

"Why would you live in some place that doesn't give you joy?" Julie Weissend says excitedly, while providing a personal tour.

I can tell she has given many such tours, and likes doing so, as she sounds much like a seasoned curator while talking through a never-ending, genuine smile.

"I think people's spirits get bogged down, and it's welcoming when there's a place to sit, and it's comfortable and yet it's still aesthetically pleasing," she says while standing in the large kitchen that overlooks the living room.

Every detail in the home is well-orchestrated: from strategically located pink walls that neutralize the architectural masculinity, while also paying homage to Julie Weissend's pink-loving grandmother), to diamond-shaped parquet floors in the master bedroom.

Serving as kitchen countertops and backsplash above the stove, large slabs of quartzite — which is naturally occurring and denser than granite — bring elegance and an earthy, yet heavenly, ambiance to the kitchen. Fiery oranges dance with shades of green, brown and pearly white. 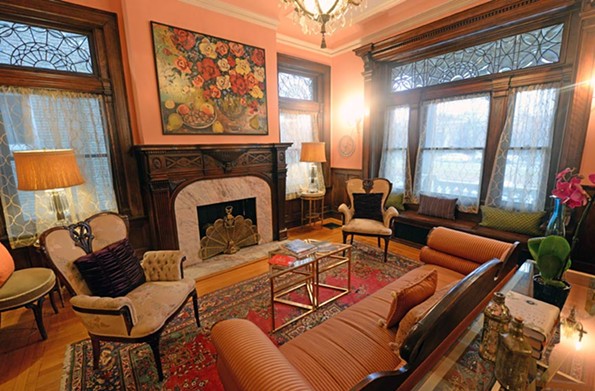 There's a story to go along with nearly every crevice of the house. And where there wasn't one before the Weissends moved in, they seem to have found a way to spruce one up.

At the lower level of the comparatively mundane part of the home, there's a hidden room, for example.

"Between here and there is a secret room," Julie Weissend says, pointing to a wall down a hallway as the end point for my ensuing mission. "See if you can find it."

"Colder. You're getting colder," she says through a laugh, before finally pointing me to the correct wall to push, despite my pleas for time.

If you search well enough (or Mrs. Weissend gives you the answer), you'll find a subtle crack in the wall, where you can push the wall open. Then, ta-da!

Well, actually, it's just a storage room on the other side of the hidden wall, but it's still fun trying to find it.

The Weissends have a high-tech mechanical room to regulate the home's temperature in an energy efficient way, using a geothermal heating and cooling system.

There's also a modest-sized gym in the home, which seems to make sense for a couple keen on details.

Attached to the master bedroom is a walk-in closet that can be accessed by prying open thick, large double doors, appropriate for a grand reveal to a closet large enough to be a small bedroom or an office. There are floor-to-ceiling closet cabinets, painted greenish-blue. It's brightened by recessed ceiling lights and a sparkling chandelier, an ideal way to feel like a celebrity while getting ready for the day.

Now 105 years since it was built, the house was completely renovated several years ago when the Weissends purchased it. The original blueprint inspired the redevelopment, though plenty of personalized improvements have also been made. The back of the house was also added onto.

The Weissends were the perfect couple for the renovation project at their Monument Avenue home, as owners of Dovetail Construction Co., a Richmond-based company that has been creating renovations for more than 25 years.

"When people say a house has 'good bones,' it's really honoring all the energy and decisions made to that point in time," Julie Weissend says. "A good renovation is when you can channel that and move the structure forward in a progressive way that is palpable to people. It works from a functional perspective and resonates from an inspirational one."

Since the 1960s it had been used by the Senior Center of Richmond. Commercial elevators and lights had been installed among the many other things that would have made the structure undesirable as a single-family home. It was originally designed to be a single-family, and the Weissends say they wanted to see it return to one, considering that Monument Avenue originally was mostly single-family homes.

The senior center stopped using the building, and it sat vacant until the Weissends purchased it. Amid years of vacancy, the buildings city-assessed value was $515,000 in 2000, according to Richmond property records, compared with about $2.9 million in 2019.

This house has the best of the new and old on Richmond's historic and prized Monument Avenue. While the timeless glory of yesteryear is intact — and aged wood gives it unbreakable strength and character — there's also just the right amount of modern interior design and comfortable furniture to make the it feel like a home for entertaining guests and raising their two children, now 23 and 26 years old.

There's also a sense of appreciation for Richmond sprinkled into the interior. In the foyer, for example, an original painting by Theresa Pollak hangs proudly as a centerpiece for conversation. Pollak was a nationally-renowned artist from Richmond, who founded the Virginia Commonwealth University School of the Arts. She died in 2002 at 103.

The Weissends embrace the idea of preserving history, and the home is energy efficient as a bonus. They've been quick to open their home to others, and their welcoming embrace would breed excitement for any interior design enthusiast.

"We feel like stewards. There's a responsibility that comes with being a steward of a house, and we really take it seriously," Julie Weissend says. "It's cool to potentially be an inspiration to people and say 'You know what, let's save this place and make it better and last another 100 years.'"