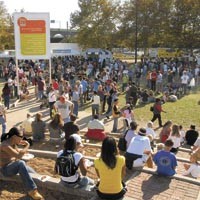 In our 20th anniversary issue five years ago, we listed Richmond International Airport as one of the things that annoyed us about Richmond. Today RIC is a place to be proud of, with an impressive new design and more important, low-cost airlines (thank you, jetBlue and AirTran). See, change does happen in this town! Here are some things we'd like to see happen in the next five years.

2. Challenge tourism officials to increase efforts to promote Richmond as a tourist destination. Maybe a slogan like, "400 years and counting backward!"

3. Move Friday Cheers back to Nina Abady Park to enliven the area, or better yet, start another festival there.

4. Encourage county planners to establish a grid street system to disperse traffic, like at the intersection of Pouncey Tract and West Broad Street in Short Pump.

5. Encourage landscaping the alleys in old Richmond neighborhoods, hidden treasures that could be enhanced.

7. Do everything possible to keep the momentum going from the National Folk Festival's successful three-year run.

8. Repave the walkways in Monroe Park.

9. Landscape the retail area of MacArthur Avenue in the Bellevue neighborhood to enhance the atmosphere already being established there.

11. Run shuttle buses from the Manchester arts district to Shockoe Bottom and Shockoe Slip across the 14th Street Bridge.

12. Rebuild First and Second streets as links between downtown and North Jackson Ward.

14. Open an ice cream store downtown. Are we the only place in the country where you can't buy a scoop downtown?

16. Investigate a rails-to-trails system, in which abandoned railroad tracks are turned into walking trails.

17. Wear recycled clothing. The options are out there, at stores like Halcyon, Bygones, Luxor and None Such.

22. Save vintage movie houses in Richmond that are falling into disrepair, and establish an arthouse movie scene to complement the Westhampton.