This Shockoe Bottom standout is much more than pie in the sky.

Scott Elmquist Nota Bene takes simple ingredients to make more than the sum of their parts.

You may be in Shockoe Bottom, Style reviewer Nathalie Oates says, but it feels more like date night on a quiet corner of New York’s West Village.

Inside, chefs skillfully manipulate fire to produce perfectly grilled seafood and weave garlic throughout dishes in a way that can be described only as magical.

Its menu is an array of adroitly imagined dishes that tastes as if a tiny chunk of Italy broke off and landed on East Main Street.

And despite its relative youth, reviewer Karen Newton says, the place seems as if it’s already a seasoned veteran of Richmond’s restaurant scene.

For those reasons and more, Nota Bene is Style Weekly’s 2017 Restaurant of the Year. 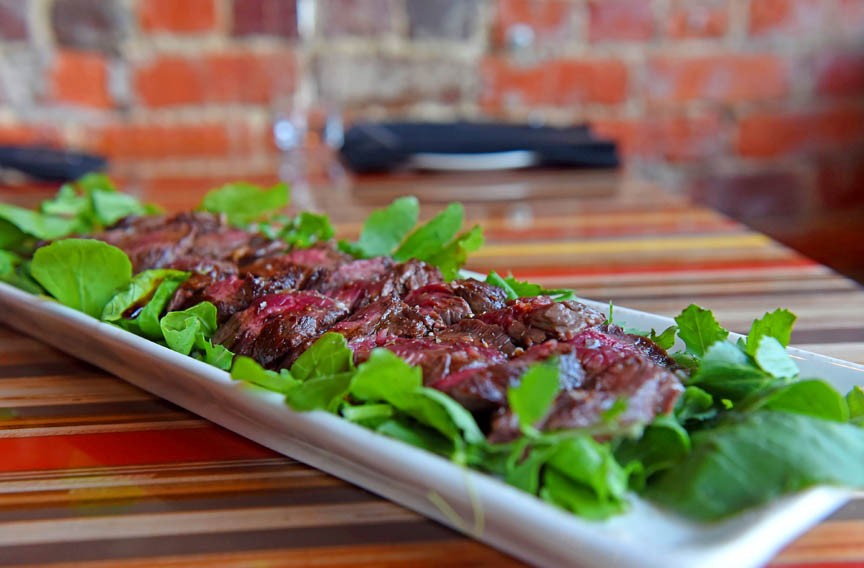 Looking back, it all seems inevitable. And yet it didn’t arrive full-blown — concept-ready and professionally designed — from inception to execution. Its birth was almost accidental.

In the beginning, there was Pizza Club, an informal monthly gathering that Victoria and Joe DeRoche held at their Museum District home. The couple provided the wood-fired oven in the backyard, plus sauce and pizza dough. Guests brought the rest of the ingredients to make their own custom pies. The goal was to not only contribute, but also to impress. It was a win-win situation for everyone.

The success of the club led to Pizza Tonight-branded pizza kits — dough, sauce, cheese —that could be found at farmers markets and in such local specialty stores as Ellwood Thompson’s Local Market. It also led to a business that wasn’t exactly a food truck, although it operated along the same principle. Victoria DeRoche purchased a mobile pizza oven that could be towed from place to place and sold pizza from under a tent at almost every event across town. It was wildly successful.

“I was standing in a field — it was 40 degrees and raining — and I was thinking about how nice it would be to have a brick-and-mortar,” DeRoche told Style for an article in 2015. “[The restaurant] was utterly inspired by being out in the elements.” 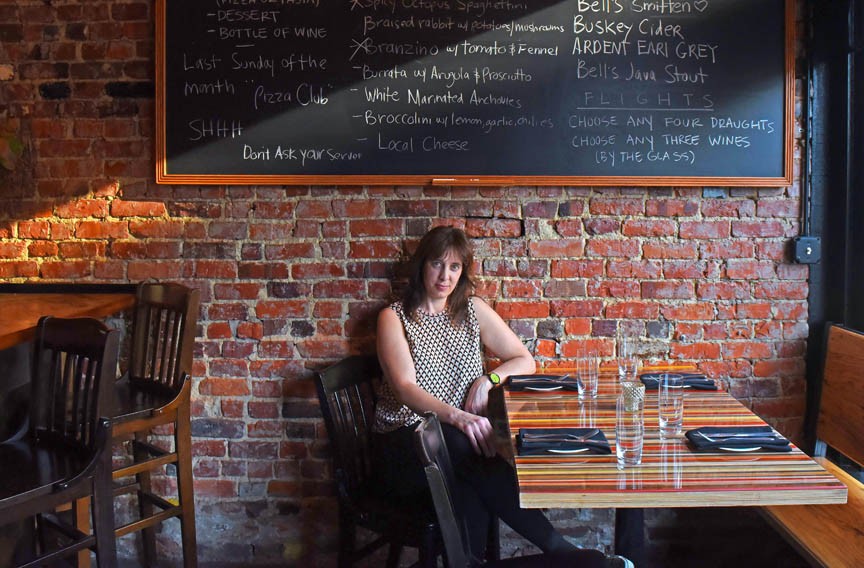 Pizza Tonight moved into a permanent spot in the old Aziza’s on Main a little more than a year ago, but too many customers expected a pizza joint instead of deftly made Italian fare that, yes, included pizza, but focused on things such as lamb sugo pappardelle, squid ink spaghettini with crab, and a chalkboard full of wide-ranging, inventive choices that changed daily.

Nota Bene — and let’s all take note of the name change — finally erased its itinerate past, and with a switch of signs, marched into the hearts of Style’s restaurant critics and diners across the area.

“Nota Bene remains my go-to when asked to recommend an Italian restaurant,” Newton says — “not just because of the rapturous food, but because the welcome is always warm, there’s well-chosen music and mood lighting that set the scene for an appealing ambiance, and the service is savvy without being formal.”

For Rachel Machacek, “It’s everything about this place that makes it so good: the atmosphere, the lighting, the friendly people, the chalkboard menu that almost doubles the number of delicious plates offered on any given day.” 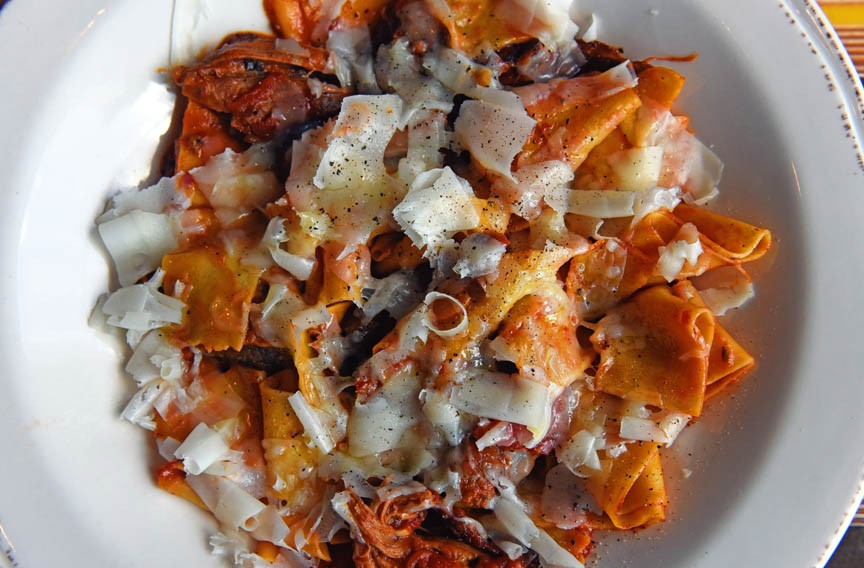 Newton’s witnessed diners change before her eyes, she says: “I’ve seen grown men profess no affinity for cauliflower, yet when it arrives roasted with lemon, olive oil, capers and Fresno chilies, they’re singing a different tune.”

Oates has a plan to maximize your visit there.

“Start with the braised fennel and then go straight for the bucatini all’amatriciana with guanciale — smoky pork that’s better than bacon,” she says. “It’s a pasta dish that seems effortless, with a smooth tomato sauce, onions and pecorino cheese thrown on top.”

The pork on Nota Bene’s menu makes Newton swoon too. “I defy anyone not to get weak in the knees over serious Italian comfort food like torchio pork ragout with white pork Bolognese and ricotta,” she says. 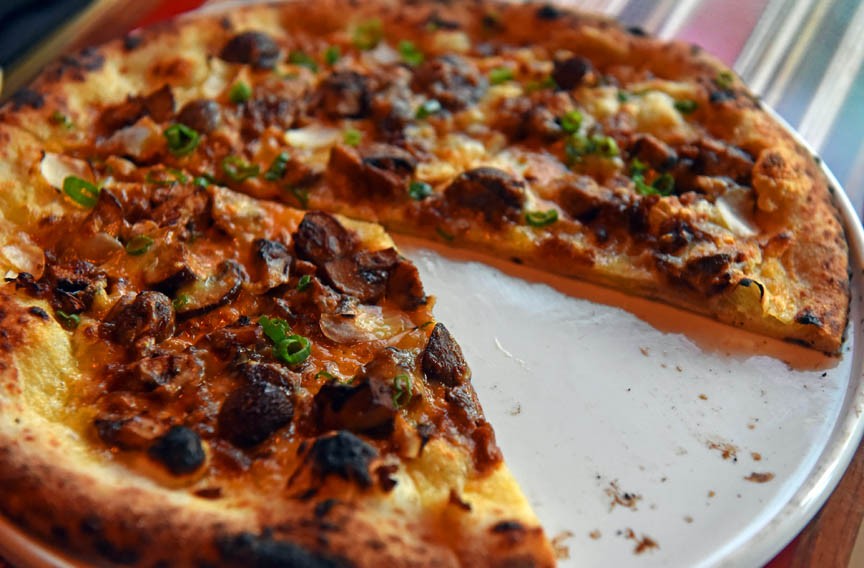 Inevitably, given the restaurant’s past, pizza remains on our critics’ minds.

“I could rabbit hole on crusts for millennia, but they make the best Neapolitan with a thick, chewy outer rim that’s bubbled and charred from a potent wood fire,” Machacek says. “It’s like this with the rest of the food: relatively simple, but expertly prepared with well-chosen ingredients.”

“And talk about your happy endings: How about house-made chocolate almond biscotti drizzled with vermouth?” Newton says of the pitch-perfect dessert.

When asked about the unusual combination, DeRoche told her, with a shrug, “Because it’s who we are.” In other words, Nota Bene has a kitchen full of risk takers led by chef Randall Doetzer who aren’t afraid to experiment with wildly divergent ingredients. 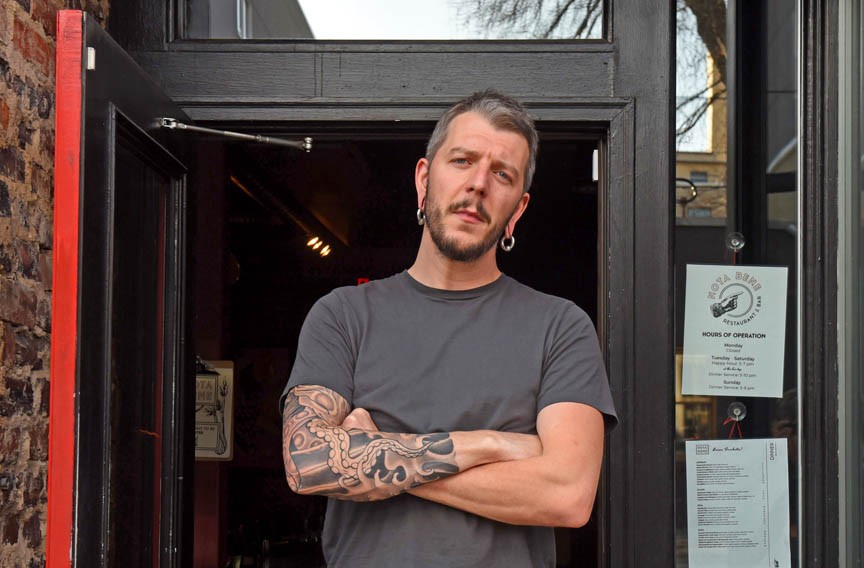 When DeRoche first opened her restaurant, she said accolades from her successful mobile business drove her forward: “It really was very selfish.”

Richmond diners would disagree. The true offense would have been resisting the dream of something bigger.

“If you can get beyond pizza,” Newton says, “Nota Bene’s wood-fired kitchen will reward you with some of the most dynamic flavors around.” S